Life in the Occupation: Notes of the Russian Abwehr Officer 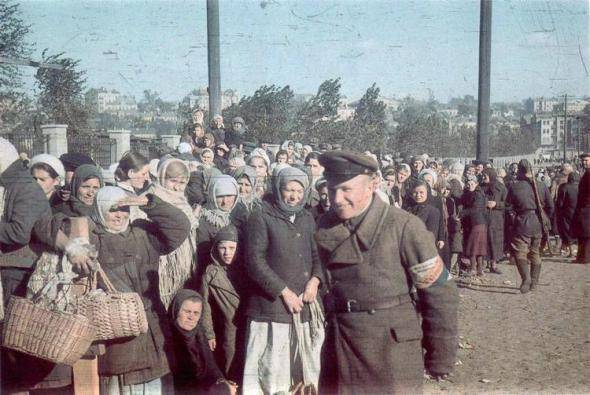 Dmitry Karov arrived in the Soviet occupied territory in August 1941 of the year. On it, he found people angry with Stalin and the NKVD, most of them easily agreed to work for Germany. Also actively former Soviet people began to build national capitalism under the Germans. All this reminds Yeltsin Russia of the beginning of 1990's.


Karov (Kandaurov) Dmitry Petrovich (1902-1961) - officer of the Abwehr (1941-1944) and Sun KONR (1945). Left Russia in 1919. From 1920 year - in Paris. He graduated from the Russian gymnasium, university. In the summer of 1940, he left for employment in Germany, worked as a translator at an aircraft engine plant in Hanover. At the end of 1940, he agreed to work in German intelligence agencies until the creation of an independent Russian state. Since the beginning of the war with the USSR, he was seconded to the naval intelligence detachment. From December 1941 of the year - in the service in the section Ic of the 18 Army headquarters (Army Group North). In 1950, an employee of the Institute for the Study stories and culture of the USSR (Munich).

Compiled in 1950, the memoirs “Russians in service in German intelligence and counterintelligence”, typewritten version. For the first time, a part of the memoirs is published in the book Under the Germans (Encyclopedic Department of the Institute of Philosophy and Philology of the Philological Faculty of the St. Petersburg State University). The Interpreter's Blog leads part of this diary. 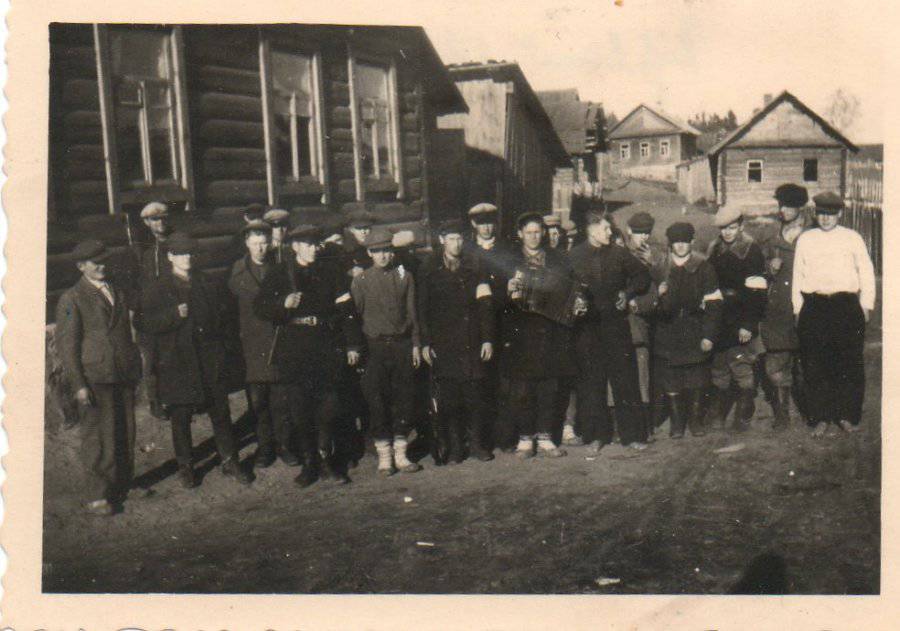 The detachment was traveling to Russia, closer to the front. I was excited to think that now I’ll get into real Russia, which I left in 1919 year. We saw the moat, and Captain Babel, stopping the car, said: “This is the border, this is your Motherland” - and looked at me expectantly. Later he told how the Wehrmacht’s Russian officers reacted. One, getting out of the car, began to kiss the ground, kneeling. Another announced that he would spend the night in the forest to listen to Russian nightingales. The third showed patriotism by the fact that he began to impose Russian land in the bags to send it to Paris. I did not have a character capable of such scenes, and Captain Babel was disappointed with me.

We arrived in the village of Glinka. On the way we met a detachment of Soviet cavalry. He was accompanied by several German artillerymen. They explained to me that they were taking prisoners to the camp. When I was asked whether they were afraid that the cavalry would run away, the artilleryman replied to me that the entire squad had surrendered voluntarily, having interrupted their superiors in advance.

The village of Glinka was Straver's. I soon met all the burgomasters of the district. They were all elderly, believers in God. Under Soviet rule, they were all persecuted and imprisoned. The entire population was afraid that the Germans would leave and the Soviets would come again.

My first agent was an elderly peasant Simon. He said that he would work, because he believes that the Communists must be destroyed in all possible ways, but he does not want to receive money for it, since it is a sin. 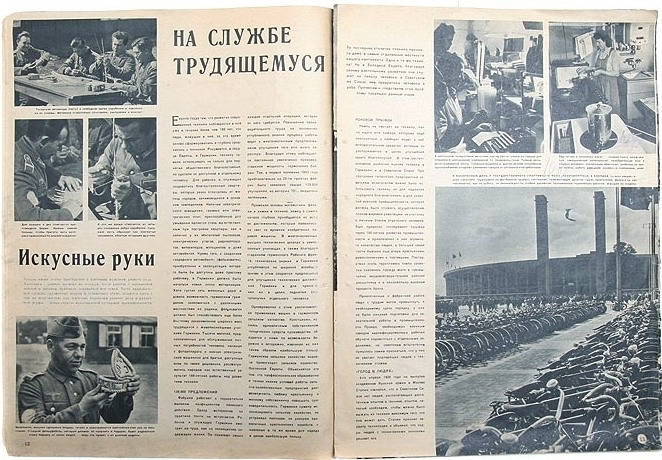 A translator familiar to me in Riga created a detachment of Soviet prisoners of war. He said that the soldiers do not want to fight for Stalin, but they are afraid of German captivity. It was a common dream, driving the Germans out of Russia, to kill the Stalinists and the Communists, to establish freedom, and most importantly, to destroy the collective farms.

Agents, without exception, were volunteers and could at any time refuse to work, and in this case they were provided with good places in the rear. The only exceptions were agents who received the task and did not fulfill it. They were sent to special camps near Königsberg, which were called “camps for those who know the secret things” and in which the prisoners were very well treated: they received a military ration, a lot of cigarettes, there was a library in the camp; 3-4 prisoners lived in the room and had the opportunity to walk in the garden.

Having crossed the front three times, it was possible to retire to the deep rear. For the most part, people from 30 to 40 have agreed to this, brave but not fond of risking their lives. But all the scouts hated the Soviet regime.

A typical example is a woman named Eugene. She commanded a detachment in Krasnogvardeysk (Gatchina). She was 26 years old, before the war she lived in Leningrad, worked as a secret police officer in the NKVD and was engaged in prostitution for some time. Across the front, it was sent in early September 1941, she immediately went to the commandant's office of Seversk and offered to work as an agent for the Germans. She explained this by the fact that she was terribly tired of life in the USSR with her dullness and boredom, and she was confident that with her good work she would be able to earn her trust, and after the end of the war she could secure a life abroad. In 1943, Zhenka asked to be released from service, motivating the request with great fatigue, and sent to live in Germany. Her request was fulfilled, and in addition, she received a large cash award from Eugene and now (1950 year) lives in Germany, has a well-established and income-producing lingerie store. 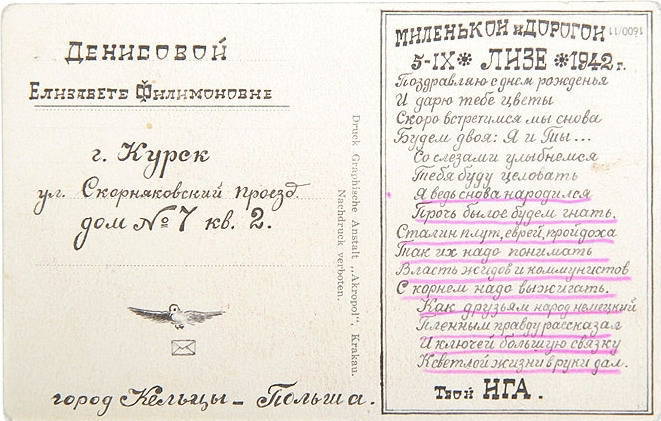 In early April, 1942, I arrived in Chudovo. It lived 10 thousands of civilians. He ruled his chosen Russian burgomaster. A big swindler and a speculator, but an intelligent and energetic man, he performed his duties well, in which the 6 selected burgomasters, who sat at the head of the districts, helped him. There were in Chudovo Russian police and fire brigade.

The worst were the intellectuals of Chudov, who had previously served in Soviet institutions. The population considered them parasites, and no one wanted to help them. For the most part, the intelligentsia was nasty and self-confident, but it was anti-Soviet. Monarchies they did not want, Stalin - too. Lenin and NEP - that was their ideal.

It lived very well merchants and artisans. One had to wonder at the ingenuity that they showed. I saw a ladies' dress shop. Others opened restaurants and tea houses. There were furriers, gold and silver craftsmen. All merchants hated Soviet power and only wanted free trade. The Soviet officials of the NKVD, with whom I spoke during interrogations, said that after the peasantry, Stalin was hated most by the workers and that the NKVD sex workers were often killed in factories. Artisans in Miracle lived beautifully. Watchmakers, shoemakers, tailors were inundated with work.

The clergy who lived in the city were Orthodox and Old Believers. Nashchetchik old believers enjoyed universal respect and were well-read and fair people. The Orthodox priests did not distinguish the population with special respect. They didn’t impress me either. The prizes and the deacon recruited by my agents worked poorly, they were reluctant to study, but they constantly demanded rewards. 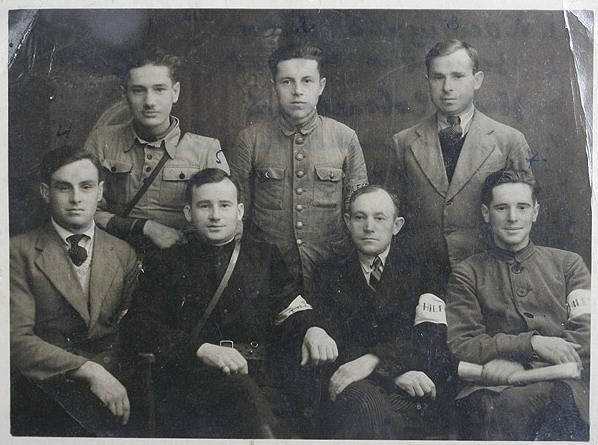 I was transferred here in 1943 year. At the head of Vitebsk was a Russian burgomaster, a man of years 30-ti. He pretended to be a Belarusian-patriot and, therefore, in the presence of the Germans, spoke only Belarusian, and the rest of the time he spoke Russian. He had more 100 officials, he also submitted to the external and criminal police. The Germans did not intervene in the affairs of the police and the city government, but did not help in any way, giving the residents themselves to take care of food, firewood, etc.

Trade flourished surprisingly: shops and stores were everywhere. Entrepreneurial merchants "in a black way" traveled from Vitebsk to Germany, Poland, Austria, and others traveled westward, purchasing goods there that they briskly traded from themselves. There were German marks (real and occupational) in circulation, Russian rubles (paper and gold - the last, to my surprise, was very much).

There were 2 or 3 hospitals running in the city due to lack of funds, but with very good doctors who were constantly invited by Germans to consult. There were several very good and expensive private hospitals that were served mainly by speculators. 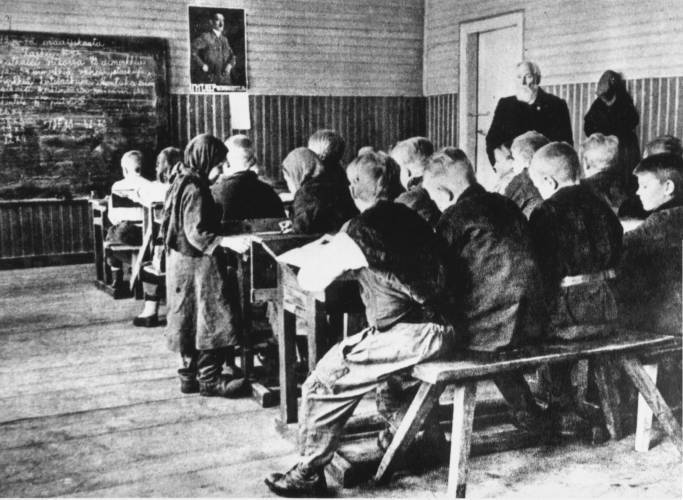 At the main station, always - day and night - a crowd of people crowded, and it was a bazaar. Everyone bought and sold. German soldiers who were driving home bought food there. And drunken Cossacks from anti-partisan detachments who had come to rest in the city walked around. Porters and haulers stood in front of the station, as well as brisk young people who offered to transport in German cars owned by state institutions and who stood with their German chauffeurs on neighboring streets waiting for customers (as the police did not struggle with this phenomenon) she could not do anything: it hurt loved the German chauffeurs vodka). Moving a little further from the station, I was amazed at the abundance of tea and small basement restaurants. The prices were high, but all these places were full of people, and everywhere they drank vodka (Polish), moonshine, German beer and Baltic fruit wine. The food in these restaurants was also abundant.

In Vitebsk there were also brothels, and separately for Germans and Russians. Terrible fights often occurred there: Russians stormed brothels for the Germans. Cinemas were, only the films in them were German, but, truth, with Russian signatures. There were also two Russian theaters that enjoyed great success. In many cafes and restaurants in the evenings danced.

In addition to many German soldiers there were a lot of in the city and Russian military. Most of all attracted the attention of the Cossacks, wearing hats, checkers and whips; besides, they were the biggest brawlers. Then, in the city there were people from special detachments of SD - Russians, Latvians, Estonians and Caucasians, who were very well dressed in various costumes, and on the sleeve had fatal letters in the triangle - SD. No one in the city loved these people, known for their cruelty and robbery, while the other military, both Russians and Germans, avoided talking to them. There were detachments of natsmenov, consisting of Kazakhs and especially Tatars. They did not fight much, but they carried out more service for the protection of warehouses.

The Russians, listed under different headquarters, ortendkentatures, etc., were distinguished by the pomp of their uniforms and especially the insignia. Their shoulders and collars were covered with silver, especially brightly shining on sunny days, and their breasts hung with orders, which they wore in their natural form, not limited to ribbons on the pads. Their heads were decorated with either colorful caps, or hats with a bright top. I have no doubt that they would gladly have worn checkers, but only Cossacks were allowed to do this.

There were several newspapers in the city, one of them was Belarusian. The journalists were intelligent people, convinced opponents of communism and Stalin; Soviet agents sometimes killed the most zealous of them. 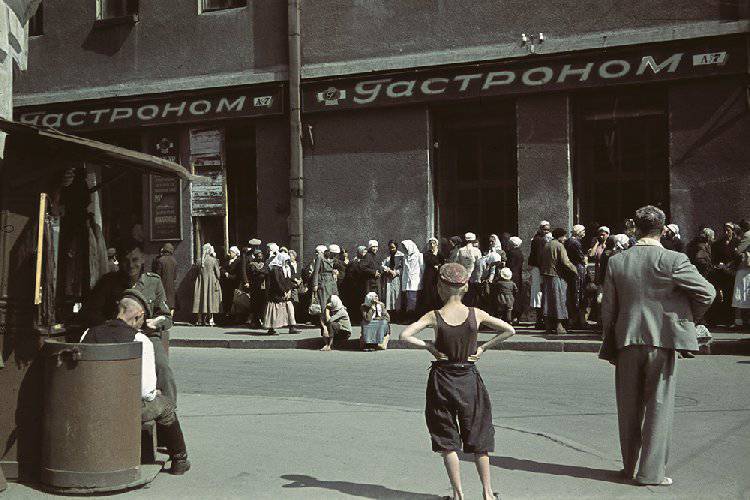 Ctrl Enter
Noticed oshЫbku Highlight text and press. Ctrl + Enter
We are
Diplomats of the People's Commissariat of Defense: on the eve and during the warWhite emigration. Foreign higher military-scientific courses under the guidance of Professor Lieutenant-General N.N. Golovina
50 comments
Information
Dear reader, to leave comments on the publication, you must to register.