Disobedience of the "younger German brother" 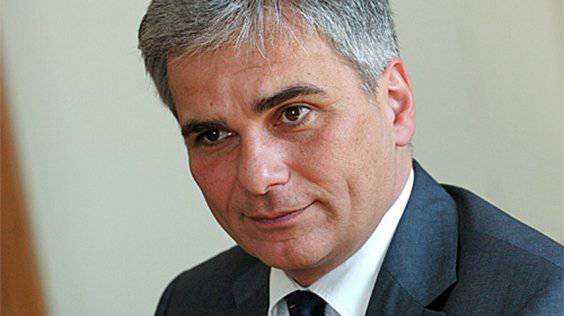 Austria opposed sanctions against Russia. This point of view is worth a lot - because we are talking about a very influential player, the second highest living standard in the EU. Given the difficult history Russian-Austrian relations, such news seems like a surprise. But if you turn to the economy - everything falls into place.

The country is small but important

The role of Austria in Europe is sometimes underestimated, but in vain. Since the time of the Austrian Empire and Austria-Hungary, the country has an excellent diplomatic staff. Today a lot of Austrians work in the apparatus of the structures of the European Union. Do not overlook the special relations of Austria and Germany. In the overwhelming majority of cases, the foreign policy of the two German-speaking countries follows along the same lines, and sometimes the Austrians voice something ahead of their German counterparts.

Having powerful banks, Austria occupies one of the leading places in the world in the export of capital - primarily to the former socialist countries of Europe. According to 2013 year, the country could boast the lowest unemployment rate in the European Union - 4,3%. The average salary in the country (admittedly, without deducting taxes) reaches Euro 2800. In terms of GDP per capita, Austria is second in the EU, second only to Luxembourg. So without the influence of Germany, the Austrians have enough.

And now the federal chancellor of such a country, the head of the Social Democratic Party of Austria, Werner Faymann (in the photo) spoke out against the pressure on Russia from the EU. “We are convinced that negotiations with the participation of Russia are the right way. I have always said that they (sanctions) are just a small piece of the mosaic, and, moreover, very undesirable. The Austrians have always been in favor of political negotiations, and we will continue to insist on this in the future, ”he said the other day.

A similar opinion is shared by the representative of the conservative People's Party, the former chancellor and head of the Austrian Foreign Ministry, Wolfgang Schuessel. “Sanctions, be they economic, political sanctions, military actions are always evidence of weakness ... Russia and Europe have an effective network of interaction in the economy, politics and culture. It may not always be easy, but there is a network of interaction, ”he said during the forum in Valdai.

The behavior of Austrians in Ukraine is also different from most Europeans.
Unlike Angela Merkel, Faymann, as well as President Heinz Fischer (Social Democrat) and Foreign Minister Sebastian Kurtz (Conservative) twice organized a peace conference in Ukraine in Vienna, where representatives of all interested parties were invited. And the same Faymann openly said that Ukraine should become a neutral "state-bridge, federal and democratic."

Thus, the two largest parties in the country are united in this issue. “Greens” and liberal supporters of toughening sanctions are in Austria in a clear minority. And the ultra-right Freedom Party, which consistently occupies the third place in parliamentary elections, even proposes to lift sanctions against Russia, criticizing the entire Western line of recent months.

“We must urgently lift the sanctions and return to diplomatic means. The methods of the Cold War are not applicable to solving the conflict in the 21st century, ”said the leader of the Freedom Party Heinz-Christian Strache.

Attention is drawn to the fact that the Austrian ultra-right have sent their observers both to the referendum in the Crimea and to the elections in the Donetsk and Lugansk people's republics.

Contrary to the story

Austria’s current behavior seems surprising in many ways. Suffice it to say that the Austrians usually draw the same line as the Germans. Angela Merkel does not tire of repeating that the time for the abolition of anti-Russian measures of influence has not yet come. Many in Germany, both left and right, representatives of business, do not agree with this. And here is a rare case when the "younger German brother" so frankly disobeyed the "older".

History also speaks against the current statements of Austrian politicians. It is enough to recall the very strained relations between the Russian and Austrian empires in the XIX - early XX centuries. In modern Austria, nostalgia for the time of former greatness is quite palpable - just look at the fact that the central streets of its cities are named after the Hapsburgs, and their monuments also stand in the most prominent places. In two world wars, Russians and Austrians fired at each other.

Ukraine for Austria is not a foreign country. Even 100 years ago, Lviv was officially called Lemberg. The empire consisted of Galicia, Bukovina, Transcarpathia. The Austrians have done a lot to turn the Rusins ​​into Ukrainians, rejecting Russia. The interests of the two states in the Balkans traditionally contradict each other. Austria has always supported the Croats, one of the first recognized the independence of Kosovo. Who is closer to Russia here - no need to repeat once again.

But history - history, disagreements - disagreements, but still the long-term Austrian Chancellor Bruno Kraisky laid in the 1960-s. basics of a peace-loving neutral country policy. Over the past decades, the Austrians have been quite cautious, avoiding sudden movements. And they should know how different parts of Ukraine are not similar to each other, and that Russia is not to blame for the horror that is happening in the Donbas.

There is a purely political moment. Austria sees in the European Union something that allows it to unite the lands that once belonged to it. Vienna is doing a lot for the EU to become a more or less independent center of power.

It cannot be said that the Austrian foreign policy was completely oriented towards the United States - for example, Austria did not gain access to Iraq in 2003. To bend under someone the country was not very accustomed, and to show independence for her is extremely important.

Money is more important than hurt feelings and disagreements.

However, the main reasons for the current behavior of Austria lie primarily in the economic plane. During the times of socialism, the Austrians managed to establish good cooperation with the USSR. And when socialism fell, Austrian companies gladly came to the Russian market. Construction sites with the Strabag logo and branches of Raiffeisen Bank have become commonplace in Russian cities. But there is cooperation in other areas.

A separate question is energy. Back at the end of the 1970's. Austria refused to launch nuclear power plants. It turned out that the country is simply not enough electricity and fuel. As a result, Austrians are forced to buy very large volumes of gas in Russia. He goes to them across the territory of Ukraine, for whose stability one cannot count. “South Stream” is simply necessary for the country, and Austria in a nightmare sees the suspension of the project imposed by the EU at the request of the United States.

Austria took an active part in the construction of Olympic and other related facilities in Sochi, its companies were able to earn decent money during the crisis. We have the World Cup ahead, and here the Austrians can share their experience. They have a football championship (although in Europe) took place in 2008 year. Again - a great opportunity for investment and subsequent profits. Yes, and we work with the Austrians here will only benefit.

It is impossible not to recall that in the Austrian banks are deposits of wealthy (and with average incomes, too) citizens of Russia. They acquire real estate in Vienna and Tyrol. Russian tourists spend money very generously on the ski resorts of the same Tyrol, Carinthia or Salzburg. These funds go to the Austrian treasury, providing a country of comfortable existence. So politics is politics, and you need to think about money. Here the authorities of Austria and think.

Of course, not the fact that the Austrians will be able to convince the same Merkel about sanctions. But to block this or that decision is completely in their power, and you should not underestimate the role of Austria.
Of course, the country's position can not be called pro-Russian, but at least it is not anti-Russian. With the current state of affairs in Europe and so expensive.