Turkey will help Turkmenistan to strengthen the border with Afghanistan

November 7 2014
23
As expected, the main topics at the meeting of the heads of Turkmenistan and Turkey will be regional security issues in the context of the rapidly deteriorating situation in Afghanistan, and cooperation in the energy sector, writes Независимая газета. 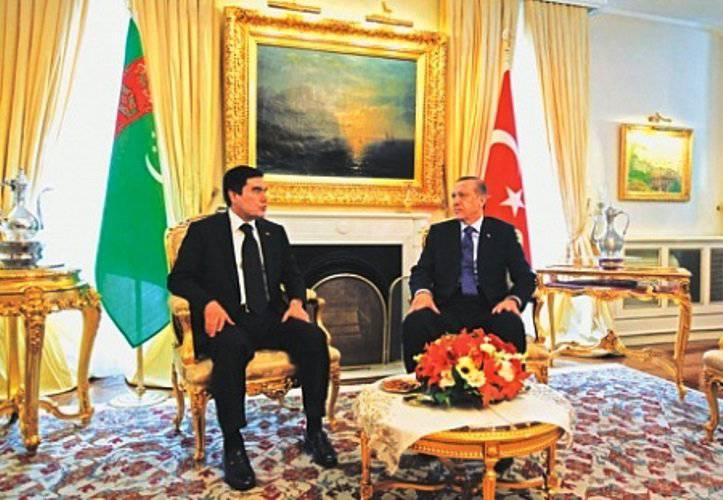 Turkish President Recep Tayyip will visit Ashgabat with a return visit. Earlier, the head of Turkmenistan Gurbanguly Berdimuhamedov visited him twice. The leaders discussed the possibility of building a gas pipeline through the territory of Azerbaijan to Turkey, and then to Europe.

However, the summit of Heads of State of the Caspian countries put everything in its place, indicating to Berdymukhamedov that the pipeline to Azerbaijan cannot be led to the bottom of the Caspian Sea - Russia objects, which promised to block the construction of any water supply systems under the reservoir.

But it seems that Erdogan is not giving up and is still trying to interest his colleague in the construction of the Trans-Caspian gas pipeline. “The solution of this task for Erdogan is extremely important. Turkey’s efforts to build the Southern Gas Corridor, of which Trans-Caspian is a part, will provide Ankara with the status of the largest energy hub guaranteeing Europe stable hydrocarbon supplies independent of Moscow. Erdogan will ensure political survival for many years, ”said Russian expert Arkady Dubnov.

One of the Transcaspian lobbyists is Ukraine, which would like to resume gas cooperation (Kiev bought Turkmen gas before 2009).

But according to another expert, Turkey is not the main player in terms of promoting Trans-Caspian. “If the talks at Erdogan and Berdimuhamedov’s talks are about energy projects, then most likely about the supply of electricity from Turkmenistan to Turkey,” AzhdarKurtov, an expert at the Russian Institute for Strategic Studies, told NG. “Turkmenistan has accumulated surpluses of electricity, some of which are supplied to neighboring Afghanistan.”

Political analysts agreed that the Afghan issue will be the second important issue at the talks. “One of the first visits after the victory in the presidential election was Erdogan made to Kabul to meet with the newly elected Afghan counterpart Ahmadzai. Ankara has a serious influence on the leaders in the northern provinces of Afghanistan, precisely where the militants have recently been threatened with attacks on Turkmenistan, ”said Arkady Dubnov. In his opinion, “this danger is once again forcing to abandon the idea of ​​building the gas pipeline Turkmenistan-Afghanistan-Pakistan-India (TAPI), which promised Ashgabat large dividends, which are now urgently needed because of the emptying treasury - after all, real revenues from gas sales are falling” .

Periodic attacks by Afghan militants on border areas have become a new headache for Berdymukhamedov. And it seems that he cannot cope with this problem alone.

“Turkey has a relatively developed military-industrial complex. It exports various weapons, in particular, to the post-Soviet countries. Meanwhile, the Turkmen army is in dire need of rearmament, even despite the modernization carried out with the help of Russia. In addition, over the past decades, the nature of potential military actions has changed, in which such weapon systems are demanded, which the Turkmen army simply does not have. For example, unmanned aerial vehicles, which are applicable for the protection of a long border. Therefore, the Turkmen leadership has preoccupied with the state of its armed forces, and Turkey can help improve their defense capability. Plus, the Turks can help in the training of officers. A similar program, by the way, Turkey works with Azerbaijan, ”said Ajdar Kurtov.

According to the expert, “Erdogan has far-reaching plans - to make Turkey the dominant state in the Turkic world, and this particular postulate became the cornerstone of his program, which ensured victory in the August 10 presidential election.” It is known that the external danger brings together, so Turkey may well become an ally of Turkmenistan. After that, Erdogan will be able to continue his line on the creation of a single Turkic parliament. “Erdogan’s task is to turn Turkey into a superpower, and he is consistently moving towards this,” Ajdar Kurtov concluded.

Ctrl Enter
Noticed oshЫbku Highlight text and press. Ctrl + Enter
We are
Voenprom Azerbaijan: Only Forward!
23 comments
Information
Dear reader, to leave comments on the publication, you must to register.