If “metastasis” is not treated, the Russian people will die out 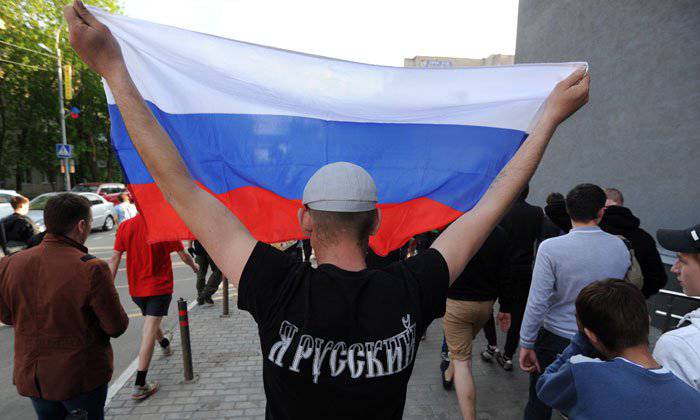 The topic of discussing Russian identity in the media is actually under a ban - they say, akin to the Nazi ideology.

And yet, dear reader, I propose to reflect on this topic. After all, the damage to the people's self-consciousness is similar to the metastasis of cancer, to malignant tumors in the human body. If metastases are not detected and removed in a timely manner, they, expanding, destroy the affected organ, and then lead the person to the grave.

So, to study the “metastasis” of Russian identity, I propose to make a journey through time.

As the initial coordinate we take the 12-th Congress of the Russian Communist Party (Bolsheviks), the RCP (b). It was there that the most important decisions were taken for the USSR on the national question.

Lenin, in a letter to the 12 congress, dated 31, December 1922 set the main meaning of the decisions: “internationalism on the part of a oppressive or so-called“ great ”nation (although great only by its violence, great only like a great snowboard) must consist not only in observing formal equality of nations, but also in such an inequality that would compensate for the oppressor nation, a large nation, the inequality that actually develops in life ”.

The meaning of all the discussions at the congress was most clearly stated by Bukharin: “One cannot approach from the point of view of the equality of nations. On the contrary, we, as a former great-power nation, must put ourselves in an unequal position in the sense of still greater concessions to national trends. ”

Since then, the Kremlin has been educating "national identity."

When the first pogroms took place in Alma-Ata, Dushanbe and Tuva before the collapse of the USSR, in which Russian people were killed for being Russian, the Kremlin’s reaction was: "Shh, do not stoke ...". As a result, confidence in their impunity was strengthened in the national regions: “Russians can be killed!”. And in Tajikistan, the account of the persecuted and murdered Russian people has already gone on thousands.

An example of acquiescence and impunity is contagious. This confidence: “Russians can be killed with impunity!” Was clearly and concretely manifested in Chechnya.

Next, I offer, dear readers, to see the results of such a policy on census figures.

According to the 1989 census, 294 of thousands of Russian people lived in Chechnya. It would seem that the instinct of self-preservation and Russian self-consciousness they should have had. However, the events of 1990-x showed that the "metastases" that hit the Russian self-consciousness in Chechnya reached the last stage of development.
I like it - I do not like it, but by the end of the twentieth century the “metastases” of damage to Russian identity reached such a level that in Chechnya, 294 thousand Russian people did not have the strength for Russian resistance. And 250 thousand Russian people of Chechnya, in a few years turned into dust, smoke and ashes. According to the census of Russian 2002, only 41 thousand are left in Chechnya

If the account of Russian losses in Tajikistan was in the thousands, in Chechnya already in the tens of thousands. This is the first visual result of the education of "national identity".

These lessons of the education of "national identity" in Tajikistan and Chechnya were carefully studied by ideologues on the "western outskirts" of the Russian Plain. They learned very well: “Russians can be oppressed with impunity, and if they make a word, they can be killed!” Having seized power in Kiev, these ideologists of the “zapadentsev” began to act so. If the account of the oppression of the Russians in Tajikistan was in the thousands, and in Chechnya - in the tens of thousands, then the ideologists of the “western outskirts” of the Russian Plain expanded the scope of their intentions to millions of Russian people.

According to the 1989 census, 11 million 356 thousand Russian people lived in the Ukrainian SSR. Yes, about 15 million people for whom the Russian language was spoken. So the scope of actions for the “eradication of the Russian people” for the ideologists of the “zapadentsy” is measured by the scale of 26 millions.

And where is the resistance of the Russian self-consciousness among the people of the Black Sea region living and thinking in Russian to this evil idea of ​​the ideologists of “zapadentsev” who seized power in Kiev? ..

Igor Strelkov, who led the Russian resistance, was forced to cry for four months: “There is a catastrophic shortage of Russian volunteers in the militia!” Indeed, 2-3 thousands of Russian volunteers from those 145 million Russians of the entire former USSR, according to the 1989 census of the year, are insignificant.

For the successful development of the people, it is necessary that it contains 1-2% active passionaries. That is, not those active "talkers", but people who are able to actively act. The events around Igor Strelkov show that there is no minimum number of passionaries in the Russian people. And this is a direct result of the suppression of Russian self-consciousness.

The “metastases” of damage to Russian self-consciousness by the year 2014 reached an enormous size. On the territory of the former USSR, millions of Russian people turned into second-rate people

Now, dear readers, let's see what happens to the Russian self-consciousness in the Russian regions themselves.

Strictly speaking, we should be interested in, first of all, damage to the self-consciousness of the Russian people, that is, those Russian people who have lost their awareness of belonging to their Russian people.

The answer to this question for each region can be found in the census tables in the row:

- for the census 1989 of the year - "Persons who have not indicated a nationality";

- for the census 2002 of the year - "Persons who did not indicate their nationality in the census";

- for the census 2010 of the year - "Persons who did not indicate their nationality."

Now, dear readers, we will look at the last two decades - from 1989 to 2010, the change in the self-consciousness of the Russian people, in those regions where more than 75% of the population indicated belonging to the Russian people.

The censuses in the Russian regions show that the number of people who did not indicate their affiliation is almost the same for these censuses - about a dozen people are 3-4. But the degree of this quantity is different:

At first glance, these values ​​of the loss of awareness of belonging to the Russian people are insignificant. But it only seems. After all, the trend of the expansion of "metastasis" damaging Russian self-consciousness in these two decades corresponds to a geometric progression. With such a trend, by the next 2020 census of the year, the “metastases” of damage to the Russian self-consciousness will cover every second or third person from 10 Russian residents.
How dangerous is the loss of awareness of belonging to your people? ..

Chingiz Aitmatov in the novel “And the Day Lasts a Century” described the image of a mancourt slave.

What is the difference between mankurt and ordinary slave? ..

In an ordinary slave, the awareness of their belonging to those kindred who are free from slavery is still alive. Therefore, he is a potential rebel. And for the slave owners, the worst is the revolt of such slaves.

Mankurt, in contrast to the usual slave, is deprived of self-consciousness and the memory of his former life and of his relatives. Therefore, from an economic point of view, mankurt, compared with the usual slave, has a number of useful qualities. Mancourt is absolutely subdued. All his thoughts are reduced to satisfy hunger. He, like a dog, recognizes only his masters. In this case, the assigned dirty, hard work will perform blindly and diligently.

Chingiz Aitmatov described how mankurts were made in the Middle Ages. A young man who became a slave was shaved his head. Then put on the head "washer", carved from raw camel skin. In the sun, the skin dries out. And the young man either died, unable to bear the terrible pain, or lost his memory for the rest of his life.

No matter, mankurt is the real practice of the Middle Ages or the artistic image of Chingiz Aitmatov. And the important thing is that even now young people are being turned into mankurts. In today's world, a person who has lost the awareness of belonging to his people is the same mankurt - this is “Vanya, not remembering kinship.”

I repeat, the censuses show that in the Russian regions over the past two decades, the number of such mankurts who have lost their awareness of belonging to the Russian people is increasing in geometric progression.

How are such “Vani not remembering kinships” being made now? ..

Of course, medieval methods of obtaining mankurts with the help of camel skin pucks are not suitable. The twentieth century created "progressive methods" of turning into mankurts. Now deprived of memory through the media.

This psychological property of the media is the basis for the method of destruction in Russian people of the Russian identity. This method of psychological influence can be expressed by the formula: "You can not show positive Russian features, you must necessarily portray the Russians in a mocking style." Of course, in this direct form, this method is rarely used. Real practice corresponds to the English proverb: “Repeat a thousand times to a person:“ you are a pig, you are a pig, for a thousand first - he grunts ”.

So do not be surprised, dear readers, when on TV or on the Internet it sounds: "I am ashamed that I am Russian."

So let's see what demographics show. Rosstat has already published data on the number of births and deaths by region of the Russian Federation in January-September, 2014.

Experts of power structures assure us: in Russia there is a confident natural increase.

Indeed, in the whole of the Russian Federation in January-September 2014, the increase in 27 thousand.

Total for 9 months 2014 of the year only in these areas of the Russian Plain - a decrease of 115 thousand.

Perhaps the rulers and politicians, listening to the opinions of experts, are interested only in Moscow and St. Petersburg, where for the same 9 months of 2014, the growth is really: in Moscow - 15 thousand, in St. Petersburg - 5 thousand.

There is a direct relationship between the damage to the Russian identity and the extinction of the Russian people.

I repeat the analogy with cancer metastases, malignant formations in the human body. If cancer metastases are not neutralized in a timely manner, then they, growing, will drive a person to the grave.

The same happens with the Russian people. “Metastases” of damage to the Russian self-consciousness greatly weaken the ability of the people to resist external influences.

The great reformer of Russia, Peter Arkadyevich Stolypin, said: "A people without self-consciousness is the dung on which other nations grow." Open the link and you will find both a numerical demographic result and a graphical display of deviation from Stolypin’s order.
In fact, the supreme power, politicians and political scientists in Moscow should think about the “metastases” of damage to the Russian identity and the extinction of the Russian people. Nevertheless, I don’t see such thinking, either on TV or on the Internet.