God blew and they disappeared

November 1, 2014
6
July 28 is the anniversary of the naval battle of Gravelin. On this day 426 years ago, the English fleet, under the command of Admirals Charles Howard and Francis Drake in the English Channel, defeated the Spanish-Portuguese "Invincible Armada" of the Duke of Medina Sidonia, sent to conquer Britain. And although the current historical reference books usually indicate the date of the battle on August 8, 1588, the British switched to the Gregorian calendar only in 1752, and in Julian this date falls on July 28.

Thanks to the victory in the Battle of Gravelino, England retained its independence and acquired the status of a great maritime power, and Spain began to gradually wrinkle and lose its former power until it turned from a world leader into a second-rate state on the periphery of Europe.
It can not be said that the Spaniards under Gravelina were defeated. Of the 139 warships, they lost only five, two of which sank, and three more were thrown onto the coastal shallows and were captured by the British allies - the Dutch. The casualties were about 600 people from more than 30 thousands of sailors and soldiers aboard the Armada ships. However, dozens of Spanish galleons, galleas and galleys were seriously damaged, and most importantly - after many hours of gunfire, the Armada ran out of ammo. The British in the evening, too, almost exhausted reserves of nuclei and gunpowder, but the Spaniards did not know about it. But they saw that, despite all their efforts, the enemy did not lose a single ship, and this plunged the Spanish sailors into dismay.

At a meeting of the Armada headquarters on the night of 28 on 29 in July, it was decided that the battle could not continue, and to return - because a strong wind was blowing in the opposite direction. There was only one thing left - to continue to move north, to make a huge loop around the British Isles and return to Spain from the northwest, across the Atlantic and the Bay of Biscay. The decision was forced and very risky, since the Atlantic storms posed a mortal danger to the riddled ships with torn gear. And so it happened: during the passage of Armada along the west coast of Ireland, a storm broke out and sank or smashed the ship 32 rocks, which killed about 10 thousands of soldiers and sailors. The rest of the ships scattered across the ocean and they returned to the Spanish ports one by one.

In total, according to various sources, from 63 to 67 ships returned. The fate of more than three dozen sailing ships remained unclear and eventually they were recorded as dead. Given their teams, the total number of irreparable loss of life in Spain and Portugal reached 20 thousand. Upon learning of this, Queen Elizabeth of England uttered the phrase in the headline. However, the British, too, were not up to the fun. Immediately after returning from battle in English navy an epidemic of an unknown deadly disease that resembled typhoid symptoms flared up. In a short time, more than 20 thousand sailors fell ill and almost nine thousand of them died.

The war between England and Spain continued 16 for years and ended in the 1604 year on condition that the status quo was maintained. A curious consequence of the Battle of Gravelino was the fact that thanks to him a potato came to Ireland. Sacks of potatoes, recently introduced into the diet of Spanish sailors and still unknown in the rest of Europe, were found by the Irish in the holds of the wrecked ships of the Armada, and the surviving crew members told what it was. Since then, the root crop from the New World has taken the main place on the tables of the Irish poor. 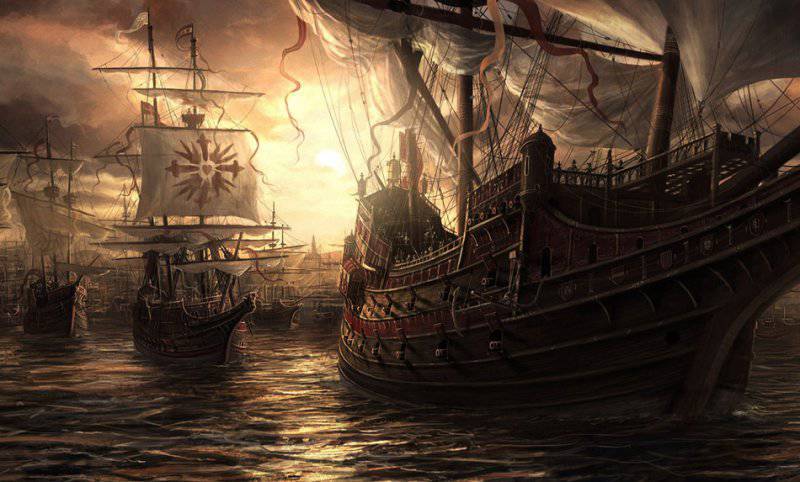 "Invincible Armada" on the way to Britain. 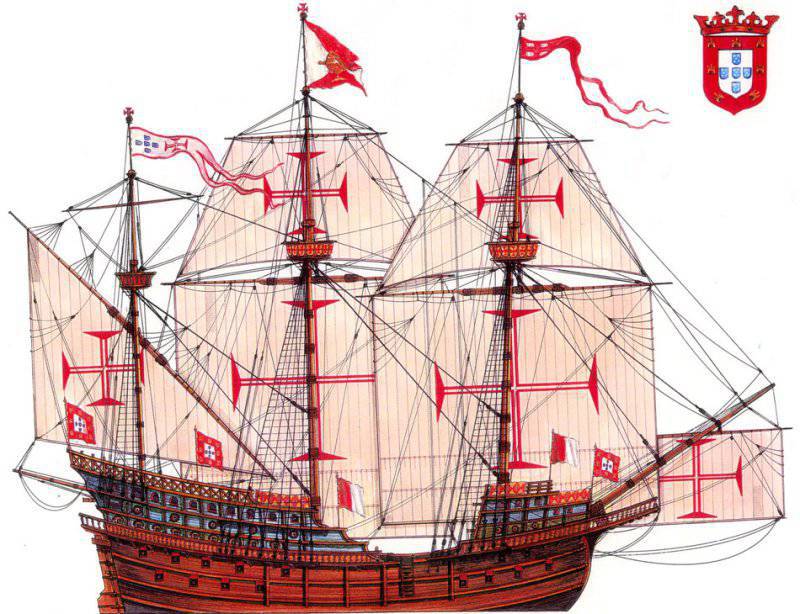 One of her ships - the Portuguese galleon "Flor do Mar" - "Sea Flower". 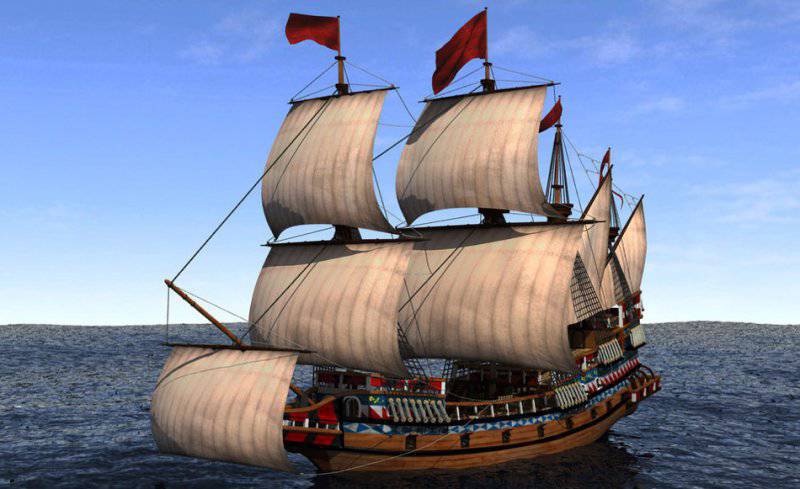 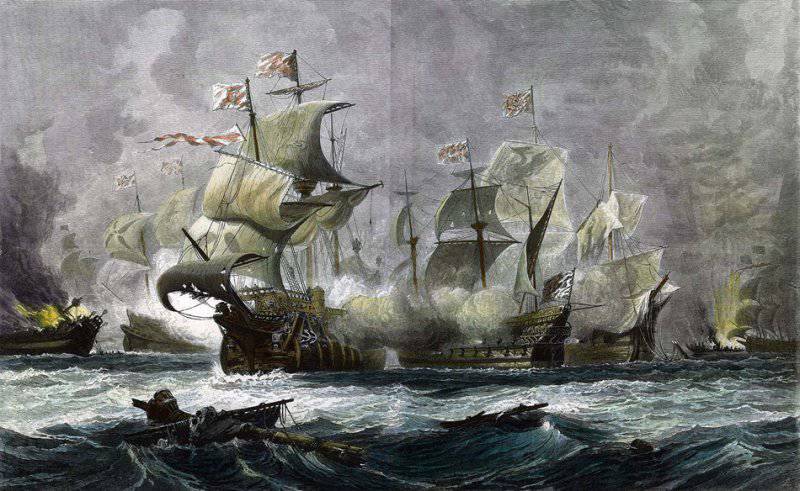 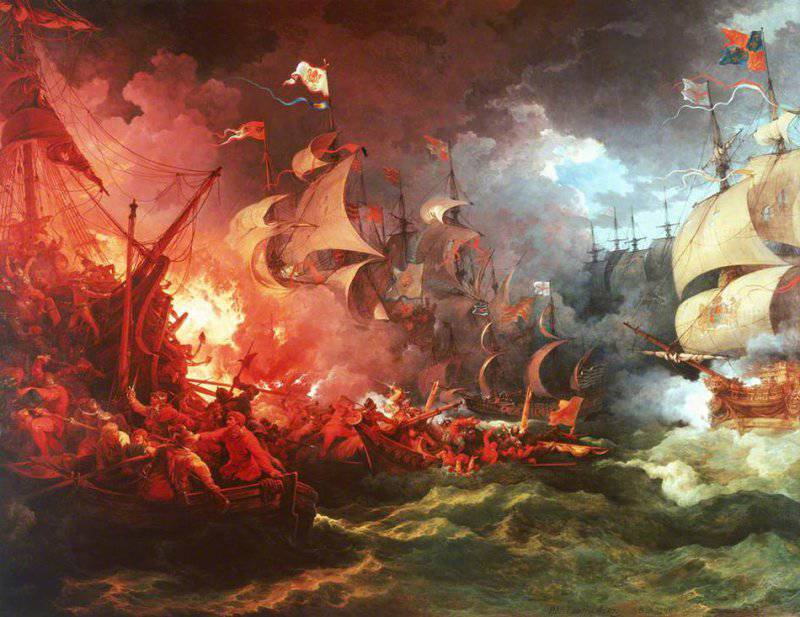 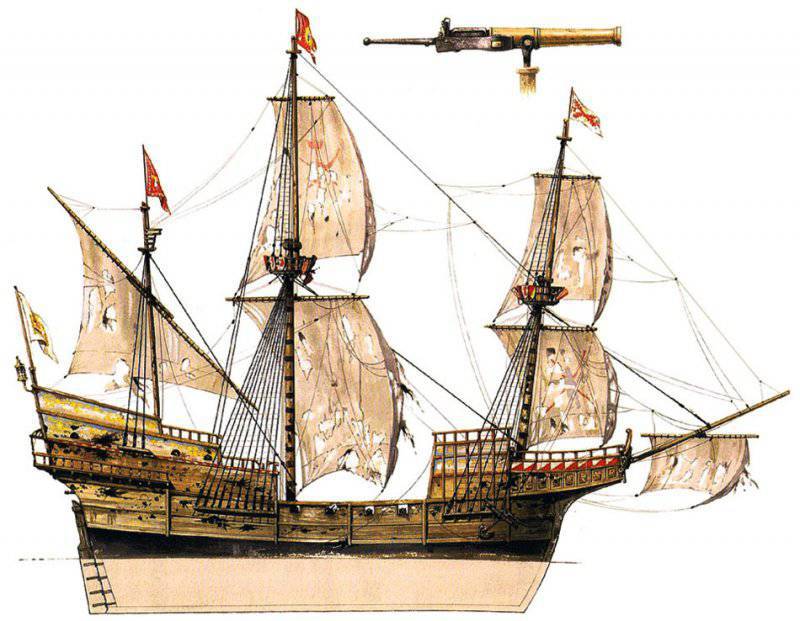 Galleon "San Juan Batista". Some Spanish ships looked like this or even worse after the battle.
Above - a bronze breech-loading falconet used in the Spanish fleet in the XVI-XVII centuries. 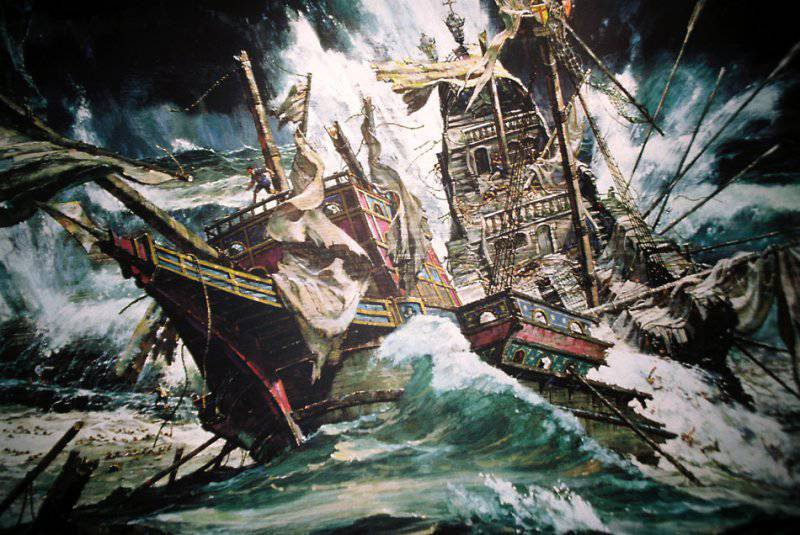 The death of the galleas "Girona" during a storm off the coast of Ireland. Of the 1300 sailors, rowers and soldiers stationed on it, only nine survived. Such a large number of people on the Girona was explained by the fact that on the eve of it he had taken on board about 800 sailors rescued from previously killed Spanish ships. 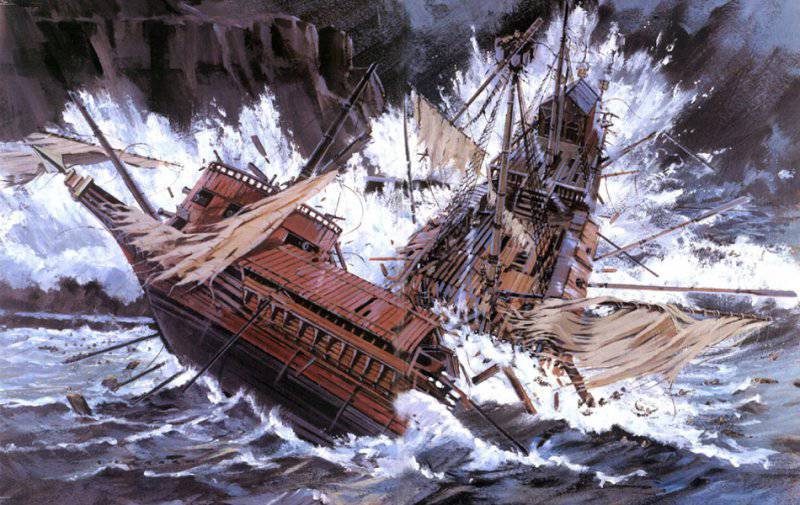 Galeas "Anunsiada" is broken on the Irish coastal cliffs. This disaster also claimed hundreds of lives. 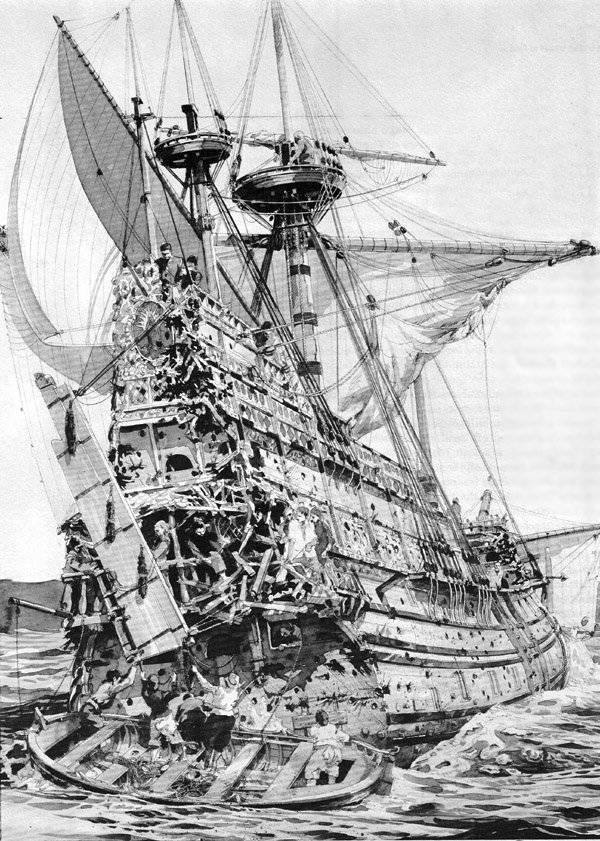 The Dutch are examining the Spanish galleon that has been thrown out onto the sandbanks and abandoned by the team. 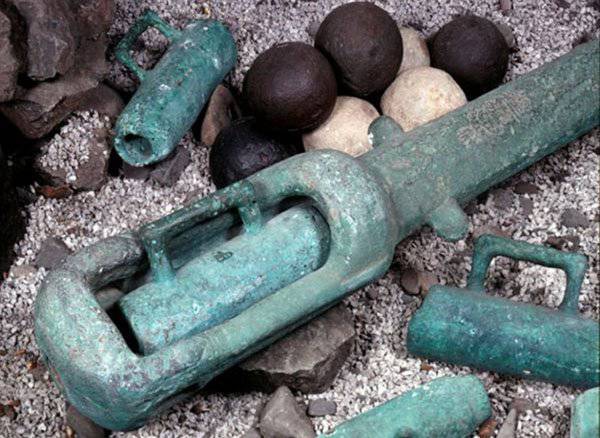 Diving finds in the remains of one of the ships of the Armada: cast-iron and stone cores,
Bronze breech-loading small-caliber gun and charging chambers for it.

In addition to the note on the Battle of Gravelino, a small selection of photographs of the artillery shells used in this battle. Since many Spanish ships after the battle threw a storm on the coast of Ireland, the guns from them went to the Irish and are now on display in local as well as in English museums. These relics give an idea of ​​how the ship's artillery looked like in the second half of the 16th century.

Spanish bronze kulevrina caliber about four inches. At the time of Gravelina, cannon barrels already had trunnions, however, the four-wheeled gun-carriage for the era of sailing ships was not widespread. Such carriages appeared in England in the middle of the XVI century, later spread throughout the world and were used almost unchanged for 300 years. But the Spaniards to the 1588 year, this innovation has not yet reached, and they put their naval guns on two-wheeled carriages such as ground, only with small and, as a rule, solid wheels.

The carriages were very low, because the distance between the battery and upper galleon decks did not exceed one and a half meters. Even the undersized by modern standards, the then sailors had to walk on the battery deck, bent over in three deaths or on all fours, and they charged and directed the guns while sitting or kneeling.

Another Spanish cannon from the Armada ship at the Dublin Museum. Judging by the form, its carriage is clearly new.

Richly decorated English bronze cannon on a four-wheel machine made in our day according to drawings of the end of the XVI century. Such gun carriages made it possible to quickly roll guns after a shot, which increased the rate of firing. In the battles with the Spaniards, this gave the British sailors an advantage.

In the 16th-17th centuries, on the upper decks of Spanish ships, guns were often placed on ordinary land carriages, which, if necessary, could be lowered ashore and used in field battles or during sieges of fortresses. The pictures - one of these guns. The carriage is also new, but it completely copies the original.

Along with the bronze in the XVI century and iron tools were used. Their trunks were welded by forging from long strips of metal and additionally fastened with hoops, worn by the hot-fit method. This watercolor drawing shows what these trunks turned into from a long stay in sea water. On it is a cannon of one of the sunken ships of the Armada, found at the beginning of the XIX century. It is built into a primitive wheelless machine in the form of a simple deck. Such machines were widely used at the dawn of artillery in the XIV century. By the middle of the XVI century, they were considered hopelessly outdated, however, in the Spanish fleet, as is evident, such anachronisms also occurred.

And this is a falconet with a government charge. Small-sized breech-guns with interchangeable charging chambers appeared in the 16th century, but after about 100 years they fell out of use, since they only slightly exceeded muzzle-loading guns of similar caliber in the rate of fire, being much heavier, more expensive and more difficult to manufacture. In fact, these guns could produce at a fast pace only a few shots, until the supply of pre-charged cameras was exhausted. The “second coming” of breech-loading artillery, as is known, happened only in the second half of the XIX century.

The cannon in the picture is rather crudely cast in bronze. The pin of the mounting fork is broken off.

Drawing a gun similar to the one depicted in the upper photo, but of a larger caliber. It is installed on the "Spanish" two-wheeled carriage, to the bed of which are interchangeable charging chambers.