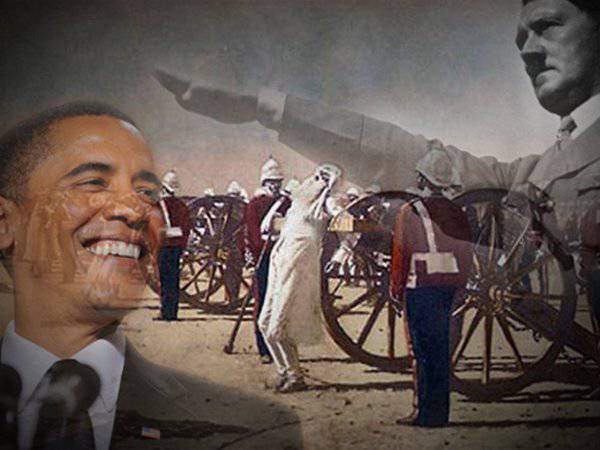 Today, the Western ruling elite is mentally a collective Chamberlain. The English Prime Minister, Neville Chamberlain, was once famous for “pacifying” Hitler in every way and pushing him to march against the USSR. The current collective Chamberlain (the leadership of the United States and the European Union) in every way "pacify" Bandera in Ukraine and pushing them to war with Russia. And not just for a local war, but for a world war. For the call of Bandera Irina Fahrion "to destroy Moscow" is a call for a world war.

And how does the collective Chamberlain behave in this situation? It turns out misanthropic, manic anti-Russian policy of Bandera - is an expression of the most genuine democracy and European values. So it turns out that Bandera is in the language, then Western politicians have in mind. Under the guise of Pharisees lamenting on the establishment of peace in Ukraine, the collective Chamberlain seeks to turn Ukraine into a NATO springboard in his march on Moscow. Therefore, it is not by chance that, having established control over Kiev, the collective Chamberlain intends to take the Russian-Ukrainian border under "international" control. And who is invited to the "international" controllers? Germany, France and Italy. Just like in the time of the Munich agreement. The goal of such a “control” is absolutely clear: to launch Bandera on the Russian border in order to establish a fascist order in the Donbas and the Luhansk region. Vladimir Yakunin is absolutely right that “in Ukraine there are not just nationalists, there are pure neo-Nazis, their hero is Bandera. This is fascism! ”

Historical reference. In the interwar period, the so-called Western democracies fostered fascism, thereby proving the undoubted kinship between their democracy and Hitlerism, and also demonstrating the moral limit of the fall of their civilization. By the way, fascism was born not in Italy and Germany, but no matter what in the "old" "good" England. English colonial policy was a purely fascist policy. The most consistent bearers of fascist ideology were the British colonial officials and officers who hold the lead in creating the first in recent history concentration camps during the Anglo-Boer War of 1899-1902 and the secret society The Lost Legion. This prototype of future SS troops was glorified by R. Kipling, who wrote that “only people with the hearts of the Vikings” could serve in the legion. As for one of the first peoples who became a victim of British colonialism - the Irish, during the famine of 1847, it was not some hardened philistine, but the English philosopher Thomas Carlyle who proposed to paint two million Irish black and sell them as slaves to Brazil. In fact, Thomas Carlyle was the spiritual forerunner of fascism. It was he who, without hesitation, expressed his philosophical pearls: “Whom heaven made a slave, no parliamentary vote will make him a free man.”

The distinguished Indian writer and thinker Rabindranath Tagore noted with bitterness: “Just think how England picked up on the grubs of starving India! But many in England believe that to feed them forever is the great mission of India! What a misfortune if, for the sake of prosperity and the rise of England, an entire nation remains in slavery. A foreign civilization, if we can call it a civilization, robbed us. The day will come when, by the will of fate, the British will be forced to leave India, while still part of their empire. What India, what terrible poverty they will leave after their departure, what havoc! ”Hitler was only a student of the English colonialists. He considered it reasonable and fair that “many hundreds of thousands of people in England can enjoy leisure, because millions of representatives of“ alien races ”work for them.

In this regard, in the mentality of the Western elite, nothing has changed even now. Racism, xenophobia, hatred, violence - all these ideological attributes of fascism dominate in her mind. The difference between, say, some Cameron, Holland, Merkel, and the straightforward Thomas Carlyle, is that the former have all their Carlyle pearls covered with a veil of religious hypocrisy and pompous political chatter on democracy and freedom. As Paul Craig Roberts, an American publicist, deeply noted, “Putin’s diplomacy’s flaw is that it relies on the goodwill and triumph of truth. However, the West does not have goodwill, and Washington is not interested in the triumph of truth, but in the triumph of Washington itself. Putin is not opposed by reasonable "partners", but by the Ministry of Propaganda directed against him. Washington lied for so long that it was unable to do anything else. ”

This is where the genetic affinity of Western politicians and Bandera comes from. Nature they have the same. Violence and obscurantism. Hype and hate. Hypocrisy and lies. And as a result - fascism. But the fascists never existed alone. If there were fascists, there were collaborators. The Polish ambassador in Paris, Jozef Lukasevich 25 of September, 1938 declared to US Ambassador Bullitt: “A religious war begins between fascism and Bolshevism. Poland is ready for war with the USSR shoulder to shoulder with Germany. The Polish government is confident that in the 3 months the Russian troops will be completely defeated, and Russia will no longer even be a kind of state. ” And the Polish General Staff 31 of August 1937, in its directive No. 2304 / 2 / 37, was even more categorically admitted that the ultimate goal of Polish policy is “the destruction of all Russia”, and not only Soviet. It turns out that, as ordinary collaborators, Bandera, with their obscurantist calls to “destroy Moscow,” do not say anything new, they merely voice the secret desires of today's so-called leaders of Western democracies, whose policies are essentially no different from fascism. This is confirmed by a recent investigation by the Associated Press agency, which established that the US government paid benefits to Nazi criminals who agreed to leave the country so that, so to speak, they did not spoil the sign of American democracy.

Ignoring the danger of the revival of neo-fascism in Ukraine and Moldova, in the Baltic republics, in other European countries, as well as the frank support of Russophobic, neo-fascist, terrorist parties and movements in the post-Soviet space by the bureaucracy and the oligarchy of the United States and the European Union clearly show the true face of their "democracy." In this regard, Hitler was no less a democrat than today's Obama, Cameron and tutti quanti.

Therefore, it should be understood that today the western collective Chamberlain represents a real danger to humanity. And to think that it is possible to reach an agreement with him in order to curb Bandera in Ukraine, this is the same naive illusion as the policy of the Soviet leadership in August 1939 agreed with England and France on countering fascist aggression. Only the integration of the post-Soviet republics, the strengthening of their defense capabilities and the measured walk of the iron battalions of the Russian army can be a reliable guarantee of the democratic and independent development of our peoples.