A. Shary: Ukrainian victory in Milan 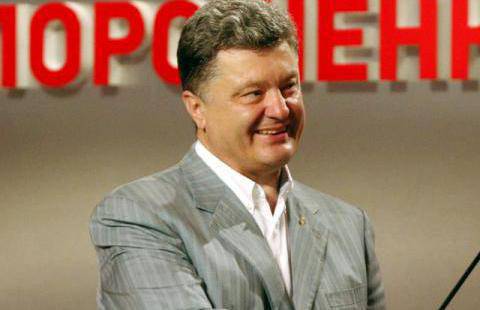 President of Ukraine emerged victorious from the negotiation process. This or similar theses sounded with a harmonious, flattering music from the lips of Ukrainian politicians after the end of the negotiations in Milan.

It is worth figuring out - is it a victory, and is there anything in the reached agreements that remotely resembles a victory.

So, it is no secret that the main task of the Ukrainian side was to make the gas problem a problem for the Kremlin and the EU, having acquired the Western countries as associates.

Putin, in his turn, managed to present the problem as intra-Ukrainian, skillfully playing on the mediocre and populist statements and acts of the Premier, and also, more importantly, he turned the "gas issue" into a Ukrainian-European problem.

The main problem Poroshenko before the talks was not the Kremlin, but its own Prime Minister. The unconstructive, frankly “pre-election” position of Yatsenyuk and the Minister Prodan played into the hands of Putin, because as a result, a kind of “alliance” emerged in Brussels and Moscow, which began long before the talks themselves.

At the same time, Poroshenko’s domestic political position was weakened by the statement of US Secretary of State Kerry about certain agreements between Kiev and Moscow, which are not known in Ukraine:

"There is an agreement that complements the Minsk agreements reached at further negotiations between President Poroshenko and President Putin, in which they agreed on certain terms regarding certain things."

The final touch to the prerequisite of the "victoriousness" of the negotiations was the signing by the President of the law on the "special areas" of Donbass.

Now, actually, about the "victory". From Poroshenko’s interview with the central TV channels of Ukraine, it becomes clear that some kind of compromise was reached, but “adopted the Ukrainian position”:

“The offer was the following: $ 325 in summer, $ 385 - in winter. The position of the Russians - no, $ 385 - a whole year. We reached an agreement, having de facto taken the Ukrainian position, let us now speak only about the winter period. And until March 31 fix the price of $ 385. The Russians agreed to this. This does not mean that Ukraine has taken the position of price, and we have already closed these questions. Not. These issues, the protocol, will be agreed when all the issues of Ukraine are completed without exception. But on the basis of yesterday’s consultations, I can say that Ukraine will be with gas. Ukraine will be with heat. ”

Ukraine may accept the price position, but it may not. Ukrainian issues can be fulfilled or not fulfilled. But the words of EU Energy Commissioner Gunther Oettinger speak for themselves:

“In recent months, we believe a fair negotiation price has been reached - $ 385 per 1 thousand cubic meters”

This is the verdict, regardless of any decisions there are any additional "issues". Another downfall of illusions is South Stream. Oettinger unexpectedly very gently formulated the priority of the project for the EU:

South Stream is a new gas pipeline, bigger than others. But it will not be some kind of new gas. South Stream will still deliver gas from Gazprom. Instead of Ukraine, it will pass through the Black Sea in order to reach the European Union. This is not bad, but it will not be a miracle. ”

Miraculously will not, the pipeline, as the pipeline. Nothing special. There is no priority, but there is no need to TRY. In the light of a very tough phrase of the European Commissioner for the price for Ukraine, this statement sounds extremely unequivocal.

Putin also transferred all the risks to Kiev:

“Russia has always been a reliable supplier, we have enough resources to meet both our own needs and the growing needs of our customers in Europe or in Asia. But there are big transit risks, and if we see that our Ukrainian partners, like in, say, the 2008 year, will unauthorized take our gas out of the export pipeline system, we, as well as in the 2008 year, will consistently stolen cut feed. "

Notice that neither the price nor the volume of GDP was expressed, which means that the positions on these issues are perfectly coordinated with Brussels.

I repeat - an invaluable role in strengthening the "mutual understanding" of Europe and Russia is played by Prime Minister of Ukraine Arseniy Yatsenyuk. Still playing the role of the operetta blackmailer, he, it turns out, does not guarantee gas supply to the EU:

He also talks about the Stockholm court:

All these statements significantly weakened Poroshenko’s already not very strong position in negotiations with Putin. Moreover, some statements Yatsenyuk cause (I will prove below) irritation among Europeans. What “interim solution”, and who will wait for this decision ?!

Irritation more and more often results in concrete statements by EU politicians, which also testifies to a kind of "fatigue" from Kiev blackmail.

“We hear that there is interest in the Polish coal from the Ukrainian side, but on condition that it will be free. I'm just in shock, if not call it even stronger. It is absolutely obvious that the Ukrainian side is also interested in importing coal to the problems of as many states as possible. ”

Ban Janusz voiced what many have in their heads. “Cunning”, according to Yatsenyuk, the plan to draw European countries into Ukraine’s problems has failed. How was it possible to get out of the negotiations "winner" with such a negative background?

As a result, we have Poroshenko, who went for ALL the conditions, and these conditions are not Russian, but European-Russian:

• debt repayment before the end of the year.

What concessions has the Kremlin made? Debt reduction by 1 billion dollars.

Is this a rebate? No, this is a fiction, and now I will explain why.

Neither the EU nor the Stockholm court recognized and in the foreseeable future does not recognize the annexation of the Crimea. Thus, the cancellation of the discount in 100 dollars, the very "Kharkov agreements", the EU and Stockholm would never have recognized.

It turns out that the Kremlin has even made a defeat a plus, presenting a concession that would inevitably happen in any case.

Theses of the "loser" (according to the Ukrainian side) Putin:

We would be happy to enter the situation, but it’s impossible to live in debt.

“... our European partners, the European Commission, can also, in my opinion, even have to give Ukraine a leverage and help solve this problem with the cash gap. There are certain tools: either it is a bridge loan, or it is a transfer of the next tranche of the IMF, or a guarantee of a first-class European bank. ”

He clearly follows the policy of shifting Ukrainian problems onto the EU’s shoulders. They say that we would even be happy to help, we are generally “for”, but you - “turn up the shoulder”. Better yet, provide a guarantee. You do provide, do not leave a weak friend in trouble?

"We, Russia, can no longer take on additional risks."

But you, the European partners, take it.

“Russia will not deliver anything to debt. And I will say why. First, we need a certain consumer discipline. After all, the level of collection, for example, in Ukraine is very low, much lower than in Russia. And the cost, the price is quite low. "

Again: and would be happy. But "need discipline." As a teacher about the student.

In this case, you "turn up the shoulder." A country that does not pay bills.

“They do not raise them, these volumes, and do not direct them to the chemical industry of Ukraine. The chemical industry is getting up. But this is like the internal problems of Ukraine. And our problem is that, count: four and a half plus billion eight hundred plus billion four hundred - how many runs there? Already under the top ten runs up. But we can no longer deliver on credit, it is impossible. ”

Without making any concessions, Putin blamed the European Union for the further solution of the gas issue.

Indirectly, the absence of any concessions on the part of the Kremlin was confirmed by Minister Yuri Prodan:

Kiev went for all conditions. But there is no money. Therefore, at a meeting of foreign ministers in Luxembourg, Ukraine asked the European Commission for two billion dollars to cover debts and prepayments.

It is interesting how the head of the European Commission spoke about the possibility of providing such assistance:

“The question of assistance is being discussed, but we are not talking about such a sum”

Czech Foreign Minister Lubomir Zaoralek said that aid could be provided, but subject to control over the spending of these funds:

“The EU may consider providing additional funds to Ukraine, which, among other things, can be used to cover the debt to Gazprom ... However, any money should be provided to Ukraine only under clear guarantees of reform, fighting corruption and meeting all other EU conditions. We must have control over the allocation of the allocated funds. ”

That is, all the requirements and conditions of the EU and Russia are accepted. The reputation of the country as “a girl whom I would not borrow” is cemented.

And now, going back to the beginning of the article - so what did they say about “victory”?