Alexander Zapolskis. What has shaken the petrodollar card house 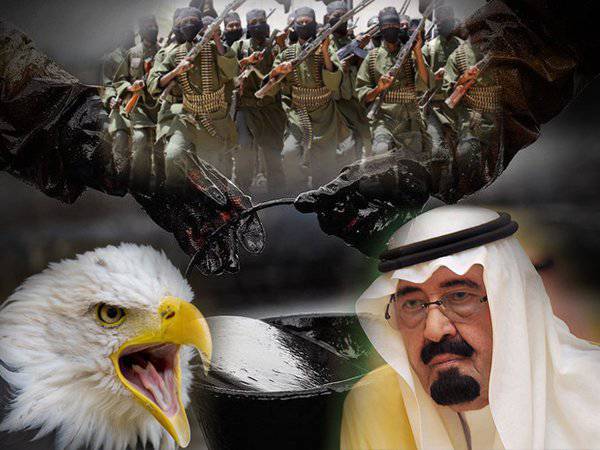 Recently, especially in the light of the Ukrainian events and the aggravation of the confrontation between Russia and the West, the theory of a large conspiracy and secret governments has become fashionable again. Only the candidacy for the throne of the supreme ruler of the world remains uncertain. Rockefellers are tipped there, then Jews. In Europe, they are increasingly talking about Vladimir Vladimirovich, while in Ukraine he is generally considered to be to blame for everything. The rebellion of the battalion of national guardsmen in the administration of the President of Ukraine, in their opinion, “was also organized by Putin”. In general, it is understandable, usually almost everything in the outside world is created, planned, or caused by someone in particular. However, one should not forget that in life a lot happens only because it just happens.

The fact is that the world oil market has long been just such a complex and huge house from a variety of cards. For example, it is assumed that oil prices are determined by OPEC. And the most important country in this country is Saudi Arabia. Hence the conviction that the specific value of the price of black gold depends on the decision of a Saudi prince. At the same time, it remains behind the scenes that the production of all OPEC member countries does not exceed 40% of the world daily oil production. For example, in the 2011 year, the entire world produced 84,09 million barrels per day. Of these, twelve OPEC countries accounted for all 30,89 million barrels, and all other producing countries 53,20 million. The maximum daily production of Saudi Arabia in 2010 was 10 million barrels. So the times when this stereotype was formed are long gone. Together with the fall of the Iron Curtain. In the same year, 2010, the world's largest oil producer, who would you think? - was Russia. 10,27 million barrels daily. Even more than in Saudi Arabia, and certainly more than in the US (7,513 million barrels).

There is another point of view on the essence of the process, based on the balance of supply and demand. Its supporters operate not only with production volumes, but also with the general structure of oil consumption in the world. They say that the market is somewhat over-stocked, which explains some price reduction. Yes, countries like China continue to increase consumption, and the number of cars in the world is only increasing from year to year. So the demand is growing. But the volume of production is growing even faster, and it turns out to be sad.

In fact, if you look not at particulars, but at the general nature of the processes, the picture becomes much simpler. For a long time, the United States diligently lined up the oil market, as they say, for themselves. Two fundamental problems were solved. First, to ensure the country's own energy security. The lessons of the 1973 crisis of the year have been well and solidly learned. Secondly, ensuring the work of the first stage of the American dollar loan. It is the “Arabic” oil that turns colored paper coming out of the American printing press into money. World oil trading is in US dollars. This means that the same Saudi Arabia receives dollars for its oil, which are sent “for storage” to the American banks. Including in the form of purchases of US government debt.

The second influencing factor is the speculative component of world markets for raw materials in general and oil in particular. Oil is not only raw material, it is also an asset with a floating price. If you correctly calculate the price trend, then in the market today you can buy some of its volume in the calculation later to sell at a higher price. The system of futures contracts allows even without the rental of oil storage facilities. According to experts, in 2013, the speculative component in the current price of oil reached 40-42%.

The third component is politics. Oil is always a lot of money. Where is the money, there are all sorts of "state" decisions. The “shale revolution” in the USA began not only because of the rise in oil prices to the 100 level of dollars. To a large extent, it was launched by its own American politicians, worried about the US economy being too heavily dependent on foreign energy supplies. And the new business that emerged soon began to live its own life. Replacing up to a third of US oil consumption in shale oil is politically good for America, but this means that around the world market about 3 million completely extra barrels were formed daily.

But they did not become the trigger mechanism of the process. No matter how trite, but the straw that broke the camel's back was the "Islamic State" (IG), formerly known as ISIS. The fact is that in June of this year, his field units established control over a significant part of the territory of Iraq and occupied the largest oil refinery in Baiji. Theoretically, the main oil fields in Iraq are located in the south, but while the IG was ruining the US-formed government of the country, the Kurdish militia of the Peshmerga had already established full control over the city of Kirkuk.

Experts perceived what is happening only in the form of the threat of a drop in production volumes in Iraq and the resulting supply shortage in the market. In general, yes, the total production of Iraq in 2010 year - 2,5 million barrels per day. Saudi Arabia solemnly promised to compensate for the fall by increasing its own production. But what is curious. First, the extraction of the Saudis and so is at the limit of their capabilities. They are no longer able to raise it in principle. Secondly, there was no shortage of oil supply on the market. Thirdly, from that moment on, IG suddenly had money. Very big money. So big that the rebels began to reformat their army into a regular one, with official salaries, and purchase weapons on the black market, where prices are always high, several times higher than the already cheap official ones. For example, the Ukrainian BTR-4 officially cost 1,5 million dollars.

Formally, of course, nobody caught anyone by the hand. In theory, terrorists from the Middle East cannot sell illegal oil in a market fully controlled by Washington. For example, in May, Libyan separatists attempted to go to sea on the tanker Morning Glory, but the US Navy intercepted it and returned to the port of Benghazi. But! The IG controls two oil pipelines: one supplies Syria, the other the Turkish port of Ceyhan. So - the first Islamists blocked completely, what caused interruptions in electricity in Syria, and the second works to its fullest. Because it is used by the authorities of Kurdistan.

Kurdistan is already exporting Iraqi oil almost officially. Of course, scandals do happen. Two tankers of Palmali Shipping & Agency JSC were chartered for refueling in Ceyhan. But then the Iraqi government made a fuss and managed to block the process. None of the international oil corporations decided to buy this oil. However, Kurdistan just wiped it off and announced a "new price" of $ 57,5 per barrel, and continued to accumulate reserves. Two more tankers are currently under loading. This means that the Kurds and IS have either a buyer or firm guarantees of the deal. Obviously - not the first.

And yet ... additional oil has appeared in Saudi Arabia, which has never produced 10 million barrels per day. Of course, there is an opinion that this is a consequence of the depreciation of reserve reserves, but ... the Saudi budget is balanced at a price of about 90 dollars per barrel, and the current price is already floating around 87. No doubt, for half a century, the Saudis have accumulated a lot of "oil profits" and can live on these stocks for some time. But the costs of the Kingdom are extremely high. Not only for oneself, but also for the policy pursued in the region. And they are absolutely not nervous. However, if we assume that they get some additional volume on 57,5 dollars, then the incomprehensibilities become not so unbelievable.

In general, the world's oil is not just more. Although this is the place to be. A significant amount appeared on the market, somewhere up to 3-4 million barrels / day of oil at a dumping price, very much lower than the market price.

And the market ran out of money. Inflate the credit bubble to infinity is impossible. In fact, by the present moment it turns out that almost all printed dollars are already in the USA. Either in the form of treasures, or in the form of foreign deposits. Formerly, to continue pumping the world economy with waste paper is no longer possible. In view of the risk of its collapse. And the crash itself is already underway. First, the derivatives and stock markets were blown away. But their capacity for tying a giant dollar mass was not enough. The precious metals markets were blown away. Then the fall touched the commodity markets. Finally, the turn has come to the largest recycling mechanism - the oil market. And now the American stock indices went down, breaking through all existing levels of support. Translated into simple Russian, this means, relatively speaking, that all American money is already concentrated in American debt obligations. All, no more money. To refinance the debt take them from nowhere. Attempting to release more paper will bring down the real market. Totally.

So the Americans are the first to be interested in maintaining high oil prices, no matter what the politicians say in Washington. But, alas, the world is changing. The system, built from the end of the 19th century to the middle of the 20th century, ceased to correspond to reality and begins to crack. The United States can not cope with patching holes and inventing temporary patches. Temporary, because neither the time nor the resources to develop something long-term they do not have. At all.

And then on the 40% speculative component ... Even without other factors, only in connection with the departure of speculators, the price should fall to about 67 dollars per barrel. No, it will fall even lower. Both because of the inertia of the process, and because of the interest of its key consumers in the lowest possible energy prices. But the cutoff level of shale extraction in the US is from 80 to 70 dollars. So, minus 3 million barrels of daily production. Somewhere on 73 dollars, Venezuela’s mining challenges are pressing. This is still a minus 2,5 million barrels. Then Brazil. And so on.

The Saudis will last the longest. They have a fantastic cut-off level for today, around 30 dollars, but for half a century, the Saudi deposits have been significantly depleted, and for fifteen years now, Saudi Arabia has been pushing the strategy of the highest prices, rather than the largest market share, with all its might. Therefore, having fallen lower, prices under serious pressure, to 20-30% of the current volume, will reduce the daily production again. By the same 65-67 dollars per barrel. But themselves, and not on the orders of the secret rulers of the fate of all things on this planet.