West is scared by Putin’s visit to Serbia

October 16 2014
231
October 20 1944 of the year Soviet troops and militants of the Yugoslav People’s Liberation Army (NOAJ) liberated Belgrade from the fascist occupation. The Serbian authorities decided to postpone the celebration of the 70 anniversary of the liberation of the capital on October 16. It is reported that such a transfer took place, including in connection with the expectations at the festivities of Russian President Vladimir Putin before his trip to the ASEM Summit in Milan, Italy.

There are posters on the streets of the Serbian capital depicting the President of Russia, on which you can read the inscriptions “Welcome to us” and “Together with Russia”. This emphasizes the spiritual kinship of the Serbian and Russian (in the broad sense of the word) peoples, common Orthodox roots and the joint struggle against Nazism and fascism during the Second World War. 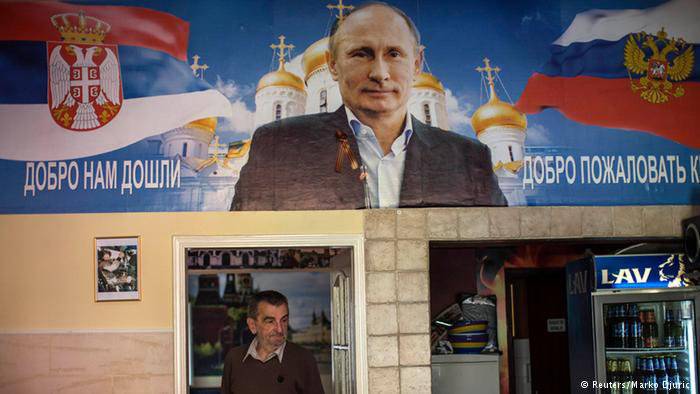 Such a warm reception for the Russian president, prepared in Serbia, could not be ignored by Western “friends”. European publications almost in one voice spoke about the fact that, say, Serbia is not going that way. The German press (in particular, Deutsche Welle) writes that the European Union "is doing everything possible" to accept Serbia, and Belgrade, in response, "allows it." At the same time, when in the comments in the same German press, readers are trying to clarify with the editorial staff, and what Belgrade really does allow itself, which only feeds on promises of a bright future within the EU, then there is no answer. And his (answer) and will not. Just for the West, the figure of Putin himself has become a global “horror”, and if any of the states does not allow itself to be harshly criticized the Russian leader and all of Russia's foreign policy as a whole, then such a state is “taken as a pencil”.

The German media cited the Serbian blogger (or “blogger”?) Dario Hierich, who predictably (since this is an interview for Deutsche Welle) demonstrates his outrage not only by the possible arrival of Putin to Belgrade, but by the military parade, which the Serbian authorities decided spend October 16.

Hayrich:
The elites in Belgrade felt that it would be appropriate for Putin’s visit to hold a military parade in the spirit of the Cold War under the guise of fighting anti-fascism.

At the same time, Mr. Khirich is sure that Belgrade is “bending” under Moscow in order to extract political and economic dividends, and this is not necessary, as the EU is supposedly already about to take Serbia into its hot embrace.

That is, supporters of European integration have now decided to call the march in honor of the victory over fascism "parades in the spirit of the Cold War." It would be interesting to learn from the same Khirich, and how to call frankly satanic dances and torchlight processions under the Nazi banners in the center of Kiev? How to call the parade of "Square", after which Poroshenko sent punitive battalions to kill civilians in the Donbas? How to call the widespread invasion of American troops in the world? How to call the artificial cultivation of world terrorism and the spread of facebook revolutions under the masks of the struggle for freedom and democracy?

He expresses his indignation at the invitation of Vladimir Putin on October 16 to celebrate the 70 anniversary of the liberation of Belgrade from invaders and such as Serbian writer Ivanyi. According to Ivanyi, the Serbian authorities would have done better if they had received a guest on any other day, but would have held the parade exactly on the anniversary, having done it specifically for their citizens, and not for someone else.

As you can see, the Facebook Serbian public, singing to the European tune, is looking for any excuse to insert its hairpin. The progressing disease generated by the Russophobia virus and the attempts to rewrite the results of the Second World War clearly does not give such gentlemen a rest. Some shout that the parade needs to be canceled, others pretend that everything is fine, but supposedly, why invite Putin to the parade.

Much more active than the Serbian ultra-liberals were the “Europeans”. As soon as it became known in the European Union that Putin could go to Belgrade, and even be met with serious honors, the bureaucratic mechanism of the Old World creaked with all its might in trying to show its working capacity. In Berlin, Paris, Brussels (well, and, of course, overseas, too) there were cries that, they say, Putin could take Serbia from under the nose of the EU.

In turn, as soon as they heard the words about the possible “withdrawal” of Serbia towards Russia, the Romanians began to fuss. The most active Romanian users of social networks have distinguished themselves by the fact that they have even outlined a plan for further actions by Putin: he will allegedly begin to cut through the corridor through Transnistria and Moldova directly through Romania - to reach the Serbian border. Thank God, so far, official Bucharest hasn’t locked in their heads so hard to fall into marasmus and follow the Ukrainian example, starting to dig a multi-kilometer ditch on its border. Otherwise, in this case, European contacts will finally turn into equal diplomacy ... But a bad example, as you know, is contagious.

Now Brussels is adding a headache: how to make sure that Serbia, God forbid (for the EU), does not go towards rapprochement with the Russian Federation, and how to simultaneously drag out ad infinitum with the issue of Serbia's accession to the European Union. It is not so easy to solve this by conventional means, but the EU is always ready for unusual ones: from “light” sanctions packages to outright persecution of the current Serbian authorities with the simultaneous preparation of new Facebook coups. So Serbia needs to decide who it is with, while not forgetting who stole Kosovo from Serbia, trying to deprive the country of its historical roots.

Notable trolling of the West from the Serbs: 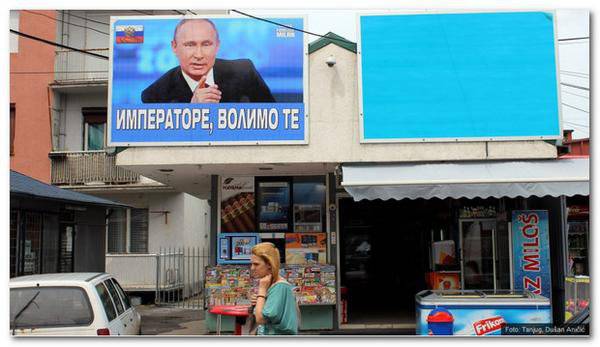 And this photo from the scandalous Serbia-Albania match: 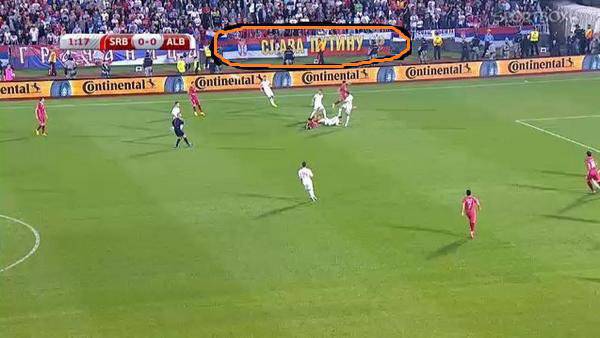