Red revenge in the New Russia 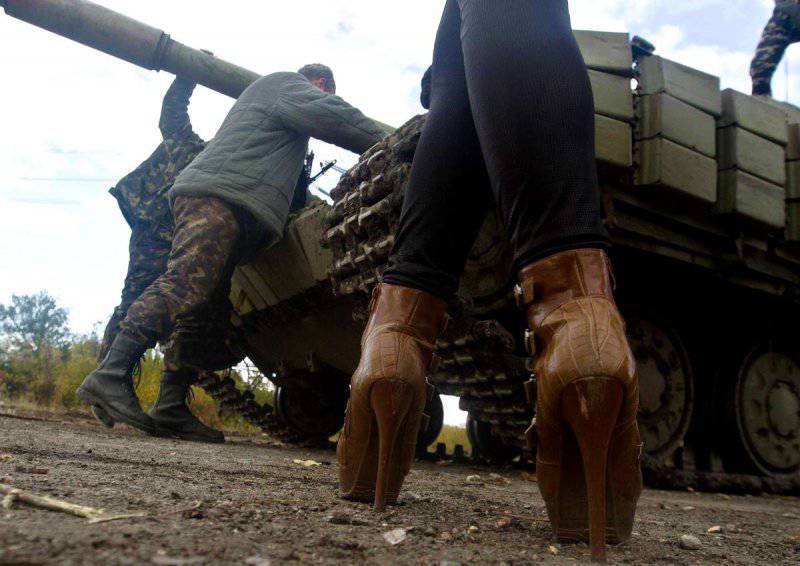 The first is a wave about the “discharge” of Novorossia, which has been going on for a long time, at least several months. If you remember, it all started with the Strelkov alarms, which were picked up by gentlemen like Dugin, positioning themselves as patriots, whose mouthpiece is the notorious El Murid. And these gentlemen are trying to hang the "drain" of New Russia on GDP.

For this group, IIS (Igor Ivanovich Strelkov) became willingly or unwittingly a ram. Which they intend to ram the GDP. At the same time, the IIS itself categorically positions itself outside politics and, as is appropriate for a soldier, is in support of the commander in chief - that is, GDP. Then an interesting strategy was adopted: if IIS refuses to oppose GDP, then it is necessary to oppose "Surkov." And who keeps Surkov in power? Right, GDP. So the strikes on Surkov are indirect strikes on GDP. Even if he does not “merge Novorossia” directly, he cannot cope with the marmots, who are merging Novorossia, and should, apparently, according to these gentlemen, leave.

On the same side there is a reel on the Kremlin-supplied head of the DPR Zakharchenko. In this regard, I was finished off by the last trick of El Murid. When, commenting on the reaction of the authorities of the DPR, namely the Deputy Prime Minister of the DPR, A. Purgin, to the Ukrainian law regarding the special status of Donbass in the “all gone” style, he colorfully painted that the DPR leadership recognized itself as subjects of Ukraine, “merged Novorossia”, because This law is welcome. But he modestly kept silent about the fact that according to the same statement Purgin, "this law does not cancel the desire of the residents of the DPR for independence." Well, it’s probably not worth paying attention to such trifles. But now everything fell into place. If Nesmiyan’s neighborhood at a press conference with IIS somehow made him doubt my former opinion of him, then the latest trick confirmed the “misguided Cossack”, which has been known since Gadhafi’s times.

By the way, I draw attention to the fact that the IIS itself has been silent recently. Perhaps, the person understood, in what fornicator “well-wishers” try to write him? The more terrible are the rumors about his “arrest” or murder. After all, the slaughtered "bloody gebney" of IIS will turn from a failed ram into a banner, and on behalf of his martyr's crown all kinds of Nesmiyan may well speak. Who will call patriots in Moscow Maidan.

The second moment, less dangerous, but very unpleasant. Many, I think, had expectations that Novorossia would become a place for the rebirth of the Russian people and a just social state without oligarchs. Mind, it was clear that the oligarchs can not build a just society. But the heart so wanted it. However, the miracle did not happen.

The Great New Russia with Kharkov, Odessa and Zaporozhye was sacrificed by the leadership of Russia to lower the passions, to stop the escalation of the conflict. In the end, for the rejection of the maximum success in Ukraine, the stability of the economic and political situation in Russia was bought. The stability of our life with you. So to say, a “peaceful divorce” with the West is being made, time is won to reorient the economy from west to east. Whether this concession will help or not, or the West will aggravate the confrontation itself and bring the “divorce case” to the scandal with the smashing of dishes, we will “see” soon. But this is not the main thing, in the end, if the West does not fulfill its obligations under the Minsk agreements, everything is reversible, and Russia will be able to take not only the areas of New Russia I have indicated, but even most of Ukraine, at any time.

Worse, oligarchs have come to power in Novorossia. The same Zakharchenko, as correctly indicated, is, apparently, really a protege of Surkov, who is entrusted in the Kremlin to "settle" the situation with the "peaceful" version of its development. In the suit falls and hit on Strelkov from Kurginyan. Surkov did not spare his offspring, sacrificed the political weight of the essence of time, made Kurginyan Kenguryan - just to take power in the DPR. In the LC, everything was simpler, the Kremlin’s people initially rushed there, without any shooter's creativity. But the DNI had to "clean up", which was caught by the pseudo-patriots of the IIS. And now we see the classic oligarchic war in the Donbass with massive mud-watering of opponents, custom-made or pseudo-attacks, squabbling among militia commanders. We, ordinary people, are no longer able to make out in this mess, Brainstorm is right in striving to continue the war in winter, or is not right who Gubarev is a thief or ideologue of Novorossia, merge Novorossia or not merge, and if they merge, who merges it. As a result, all parties to the conflict lose the support of the people, and then, when everyone is tired of following the flood of lies, you can calmly “clean out” all the unwanted in the peace of the world.

With these two points in mind, we can say that the New Russia is to be, the pseudo-patriots will not wait for a “plum”. Because in the Kremlin they understand: “merging” Novorossia, they will “merge” themselves. And with the existence of Novorossia, Maidan in Moscow is impossible. So there everything is under control and was under control all the time. You can also say that at least a social-oligarchic economic model is being established in Novorossia, as in Russia, and maybe even without a social component: will the oligarchs want to spend money on Novorossia? No, of course, they also need a profit now. And in the conditions of let it be extinguished, but the conflict with the West, and the Kremlin will not have enough budget money to help the New Russia. In Novorossia, a monarchical-Orthodox project was discredited, the banner of which was "raiderly seized" by representatives of the "patriotic" fifth column. Given that the oligarchic-capitalist project has compromised itself in 90, Russia and Novorossia are left without ideology.

And here comes a small “window of opportunity” for “red revenge.” In this situation, the left forces can offer Russia and Novorossia their alternative. But not from the Communist Party, which has long been laid down by the oligarchs. They need real communists, who must be tough, in the style of October 1917, to take power and put the leadership of Russia before the fact of Red New Russia. In the same way as Russia put all before the fact of the return of the Crimea. The leadership in the Kremlin will be forced to put up with the redness of Novorossia, because the alternative will be the notorious “plums”, which they cannot afford. On the Internet, I came across an interview with a communist militia that said that there were communist militias. If this is true, comrades, it's time to act! As the great Lenin said, the delay of death is like!