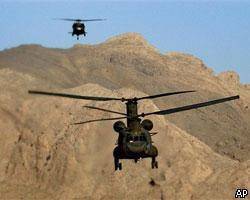 As a result of a helicopter crash in eastern Afghanistan, 31 soldiers of the United States and 7 of the Afghan military died, reports Assocoated Press referring to the statement of President Hamid Karzai. The number of casualties from today's incident was a record for the entire history PE of this kind in the country.


H. Karzai expressed his condolences to US President Barack Obama in connection with the death of American servicemen.

Recall, a NATO helicopter crashed in Wardak province on the night of 5 on August 6. The Taliban Islamist movement claimed responsibility for the attack on coalition forces: Taliban spokesman Zabulla Mujahid said the helicopter was shot down by members of this terrorist organization after the coalition pilots attacked the building, destroying eight militants.

It should be noted that the Taliban movement has noticeably intensified after the assassination of the brother of the country's president, Ahmed Wali Karzai. Militants of the organization organized explosions during a farewell ceremony with a relative of the head of state and his funeral. Some time later, the mayor of the city of Kandahar perished from their hands.

The war in Afghanistan between NATO forces and the Taliban continues with 2001. The leading role in the fighting is played by American units. US forces lost in the war killed at least 1 thousand. 605 people, wounded - 11 thousand. 684 people.

We are in Yandex Zen
US expert community is trying to identify ways out of the Afghan impasse
How to ease an unbearable burden
19 comments
Information
Dear reader, to leave comments on the publication, you must to register.