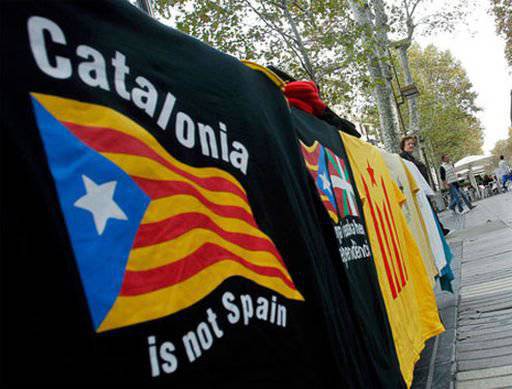 Political analyst Vladimir Matveev on the upcoming referendum on the independence of Catalonia. The parade of such referendums in Europe - what is the main reason here?

"TOMORROW". What are the main reasons why Catalonia’s desire to secede from Spain?

Vladimir MATVEEV. I would single out the reasons for the economic, religious and cultural plan. The national and cultural differences of the peoples of the regions that were not previously part of the central European state are combined with the growth of nationalism and the desire for greater economic independence of rich regions, usually associated with the extraction and transit of energy resources.

The autonomous region of Catalonia, with its capital in Barcelona, ​​is one of the most industrially developed and in the tourism market. This region accounts for one-fifth of Spain’s GDP. Catalonia gives Spain more than all the other regions of Spain to the treasury, providing 20% of the country's GDP, but it receives back a year less by 16 billion euros.

There was also growing discontent among local voters regarding the distribution of taxes collected in Catalonia, a significant proportion of which is sent by Madrid to finance less prosperous regions of the country.

In the context of the stagnation of the EU economy, some regions in Europe, first of all, Scotland in the UK, Catalonia in Spain, consider separating from the central states as a way to overcome a difficult economic situation.

Catalonia has 7,5 million inhabitants and a two hundred billionth euro economy more than Belgium and richer than Portugal, although these countries are in the EU.
In the region with a distinctive culture, the positions of nationalists are very strong, who have long fought for autonomy. The promotion of the policy of the so-called “multiculturalism” of the unviable ideology of European liberalism weakened the nation states and the internal cohesion of the countries.

In addition, it should be noted the absence of the existence of the Spanish Catholic monarchy in the ideological aspect, as well as undermined the cultural factor, which previously united the various provinces of the country. Experts note that without a common “ideological element” capable of rallying the Iberian Peninsula, it will be extremely difficult to keep the Catalans or the Basques by force together with Madrid.

The struggle for the independence of the Catalans is pushing discontent with the fact that the central government refuses to admit that the Spanish Constitutional Court deleted the words about Catalans as a nation from the preamble of the Autonomy of Catalonia’s Statute and that the Catalan language in the region has no advantage over Spanish.

The inhabitants of the region speak their own language, which belongs to the Gallo-Romanesque group of languages ​​and is very close to the Occitan language in French Provence, which for many generations has been oppressed by the Spanish authorities.

Vladimir MATVEEV. She is not only in this. It is also important that the Spanish shale gas occurrence zones in Spain that Western TNCs are interested in are located within the autonomous regions of Catalonia, the Basque country and Cantabria.

In the context of separatist tendencies in Spain, it should be noted that according to a survey conducted in June, 59% of the Basques support the idea of ​​a referendum on the independence of the region, provided that it does not entail automatic exclusion from the European Union.

The crisis in Spain exacerbated nationalist and leftist sentiments in these regions and led to an increase in the number of supporters of the secession. Despite the fact that the Spanish Constitutional Court 29 September accepted for consideration the claim of the government of the country on non-compliance with the basic law of the decree on holding a referendum in Catalonia on November 9 and the law on polls, which automatically means their suspension for five months, the protests poured into the streets again.

"TOMORROW". Is there a real possibility for Catalonia to leave Spain?

Vladimir MATVEEV. Unlike the referendum in Scotland, where the Edinburgh Agreement is in force, according to which all parties must recognize the results of the vote, in Catalonia the victory of the supporters of independence would not entail the complete separation of this region.

In 2006, Catalonia received even more powers, including its financial autonomy was expanded. However, unlike the Basques, the Catalans themselves can not determine the amount of taxes to be paid to the central government. Largely because of this, the parties could not reach a compromise.

The Catalans believe that they will be able to set duties and customs duties themselves, provide tax and financial benefits to a foreign investor and increase the attractiveness of Catalonia for investment.

The polls conducted in the Spanish region show a stable predominance of supporters of "secession" - the department. The Omnibus Sociological Center, based on a survey of 1600 respondents, reported that 58,8% of Catalans support the independence of their region.

However, the mood of supporters of independence is reduced when asked whether they want to see independent Catalonia outside the European Union, what will happen if it leaves Spain. This is due to the fact that the tourist business is very developed in Barcelona, ​​and the euro is actively used.
Unlike the UK, in Spain, declaring the people’s right to self-determination and the freedom of their will, the authorities are on guard of the constitutional order.

The very fact of the announcement in September of this year. the date of the referendum on the independence of Catalonia confirmed the strengthening of the “trend” to greater independence in Europe of economically developed and original regions, and is also one of the most serious challenges to the Spanish state in recent years.

Earlier, the Spanish government warned that the temporary deprivation of Catalonia’s autonomy status and complete subordination to the central authorities could not be ruled out.

"TOMORROW". And what is the possible reaction of the EU to the output of Catalonia?

Vladimir MATVEEV. At the beginning of the year, the President of Catalonia, Arthur Mas, was officially told that if independence was declared, Catalonia would be excluded from the EU. Consequently, it will subsequently have to negotiate accession to the Union as a new member state.
Catalonia will automatically withdraw from the EU, and the international court in The Hague will not restore it in the EU, Spain may impose a veto on the reception of Catalonia. It is possible that the Catalans will not be afraid to develop outside the EU, being the most economically developed region of Spain.

It is possible that the tendency towards separatism will push both the authorities of Spain and the EU towards the implementation of corresponding reforms. After all, the issues of separatism will be an additional factor in the economic recession and the weakening of the euro. Interestingly, the weak euro is advantageous, first of all, to Germany, as the main industrial exporter of the EU.

"TOMORROW". What are the possible economic and political changes in the EU as a result of the desire of individual territories to gain independence?

Vladimir MATVEEV. The “war of sanctions” with the boomerang effect and macroeconomic problems are factors that have led to an extremely complex economic and political situation. It is characterized by a “referendum parade” of independence from a central state of economically developed regions with a distinctive culture and language.

In the second quarter, German GDP fell by 0,2%. His rise in the 3 quarter is not expected due to the difficult economic situation in France, which pulls the eurozone into a debt trap.

Italy is slipping into recession, and French growth is nearing zero. Thus, the three leading countries in the euro area are mired in recession. Finland in the first half of the year was in the red. Nominal interest rates for sovereign debt of peripheral countries remained extremely low, and real interest rates are also low.

The tendency of a number of EU regions to secession from the central state is understandable in the context of a weakening eurozone. In the future, it can very significantly change the configuration of forces in the European Union as a whole.

Spain recorded a decrease in the number of Russian tourists, exports and sales of real estate. Analysts believe that as a result of the boomerang of the sanctions imposed on Russia, economic growth in the eurozone this year will decline by 0,3 points.

The EU is not only an economic union, but also a political union. The permission of Catalonia to immediately become a member of this bloc can undermine or weaken the EU from the inside. The example of Catalonia can become a legal precedent for other European autonomous regions that can gain independence and still remain within the EU.

In addition, nationalists and euro skeptics have become more popular in the EU. Despite the low voter turnout at the European Parliament, these parties won in Great Britain, France and Belgium. In Britain, supporters of the country's withdrawal from the European Union won. The main thing is that in Europe the support of those who demand the curtailment of European integration has sharply increased.

"TOMORROW". And what changes in this case are possible in the EU itself. Who benefits?

Vladimir MATVEEV. The reasons for the growth of separatism are the causes of the economic and religious, socio-cultural order, but the “external trace” is also traced.

Historically, Germany has always supported the “Europe of the Regions” side. Germans traditionally lived for centuries in a decentralized empire. But, playing the role of EU leader, Berlin recently decided to promote the fragmentation of large European states.

The problem is more complicated. British Foreign Secretary William Hague said recently that dissatisfaction of the majority of EU member states with the community structure is a crisis of legitimacy. According to him, the European Union does not contribute to solving problems, but only aggravates them. In the near future, the EU will increasingly feel the consequences of the stagnation of the economy and the threatening recession.

The crisis revealed the difficulties and imperfections of the modern form of European integration and the European social model.

Conflicts are often purposefully inflamed in the zones of US economic interests, powerful Western TNCs. Spain recently announced its readiness to provide Europe with gas in the event of a cessation of supplies from Russia.

Geopolitical considerations can give Spain a good chance if the sanctions result in France allowing certain volumes of Algerian gas and Spanish electricity to be supplied to the countries of Central Europe.

In recent years, Spain has actively invested in the infrastructure for the processing of liquefied natural gas, becoming the leader in its imports into Europe. Of the 21 regasification terminal located in Europe, seven are located in Spain. The country has six gas pipelines connecting it with other countries.
The main thing is that the existing regasification terminals in Spain can also be used to store shale gas, which is planned to be supplied from the United States and some other countries. The largest Spanish companies Fenosa and Endesa have signed contracts with US companies Corpus Christi and Sabine Pass for the supply of shale gas from 2016 to 2018.

The EU is not only torn apart by contradictions from within and seriously economically weakened, but also highly dependent. EU policy is strongly influenced by those who founded and are shareholders of the Fed and major transnational corporations. Therefore, not only in many European countries, but also in the European Parliament, the voices of Eurosceptics are getting louder and louder.