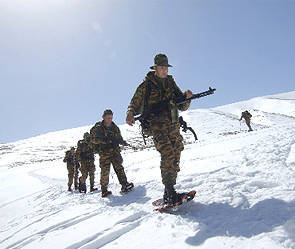 To understand the situation that is today forming around the Arctic territories, it is necessary to understand how important these territories are economically. There are two main riches: oil and gas. And a lot of them. According to preliminary estimates, the reserves of these minerals, which the Arctic sea plume has, constitute 30% of all world reserves. Today, due to a decrease in ice cover, polar deposits have become easily accessible. With the onset of summer, the vast territories where gas and oil reserves are located are free from ice. It is quite possible to exploit them easily, taking into account that the shelf is shallow.


In order to prove its rights to develop the Arctic territories, Russia sent a second scientific expedition to the North Pole. The main goal of the expedition is to prove that the Mendeleev and Lomonosov ridges in the Arctic Ocean are a natural continuation of the Russian continental shelf. However, not everyone agrees with such actions by the Russian side.

Russia's first attempt to expand its borders of the continental shelf by attaching to it the territories of the Arctic Ocean in 2001 failed, but despite this, Russia continues to defend its own interests in this region. Such actions of the Russian side have caused discontent among other states that have their own interests in the Arctic - the USA, Canada, Denmark and Norway. Canada is the most painful of claims coming from Moscow related to claims to the Arctic territories. Today, military experts point out that this, while a scientific confrontation, may well be the cause of a local military conflict, the main participants of which will be Russia and Canada. The reality of such an outcome is evidenced by the fact that at the moment Ottawa is actively increasing its military presence in the Arctic. Not far behind the Canadian side and the northern fleets of Russia and the United States.

This year, the Canadian military is planning to conduct an exercise called “Operation Nanook” (Strong Bear) off the coast of Baffin Land. During the exercise, new patrol ships will be tested, designed to serve in the difficult conditions of the Arctic. The cost of the project is $ 3,3 billion, reports TSAMTO. The Canadian Navy plans to purchase 8-like patrol ships. With the help of new patrol ships, Canada plans to protect its own national interests in the development of natural resources in the region.

Moscow is no less determined: already in 2012, Russia plans to submit an application to the UN, in which it will prove its right to expand its own borders in the Arctic (Canada plans to submit a similar application), which will further provide it with the right to develop mineral resources in the disputed region . According to unofficial data, Russia is even ready to form military units at the North Pole, whose task will be to protect state interests.

As a confirmation of this version in the Western media called the creation in Russia of a unique military uniforms, which allows soldiers to perform various combat missions in low temperatures, to -60 C. The kit includes three different types of underwear, vest, jumpsuit with straps, jacket with a hood, hat, mittens, protective helmet and boots. All individual items of clothing and footwear are based on the Thinsulate insulation (is artificial down), anti-bacterial and wind-and moisture-proof. The average weight of one complete set is 5 kilogram. The excellent elasticity of the material does not hamper movements, which allows you to perform combat missions at ultra low temperatures and adverse weather conditions.

Leonid Ivashov, president of the Academy of Geopolitical Problems, in one of his interviews stated that a convenient form is essential for the support of the Arctic forces, because if hostilities take place there, their character will be based on mobile operations.

At the same time, Leonid Ivashov noted that at the moment Russia does not have a sufficiently clear understanding of which types of military operations are permissible in the Arctic: there is no general conceptual plan on this issue, no scientific research has been conducted. “Parties that today claim to the Arctic reserves, make an attempt to state their claims on the territory of the Arctic and weaken the justified claims of Russia. Today, the confrontation is purely legal in nature. But who can guarantee that, over time, each of the parties to this process will not attempt to strengthen its position through the use of military potential, ”L.Ivashov said.

It is possible that the UN will be able to do it in view of various objective research data on an equitable basis to divide the disputed region among the applicants. At the same time, many fear the possibility that one of the states will not have enough patience to wait for the decision of the organization and it will use force to protect its own interests. This, by the way, is not the only cause of concern. Active attention to the disputed region is also shown by such an “Arctic” state as China. The so-called studies conducted by Chinese scientists are opaque, and there are very real suspicions that they, bypassing the existing international agreements, make up their mineral maps of the Arctic region. Experts point out that if the military confrontation for the Arctic between Russia and Canada is acceptable, but it can be avoided, then Beijing’s intervention in the territories to which it does not even have the slightest relation has all chances to start a global military confrontation.

We are in Yandex Zen
Our shelf
Arctic: thawed or frozen?
11 comments
Information
Dear reader, to leave comments on the publication, you must to register.