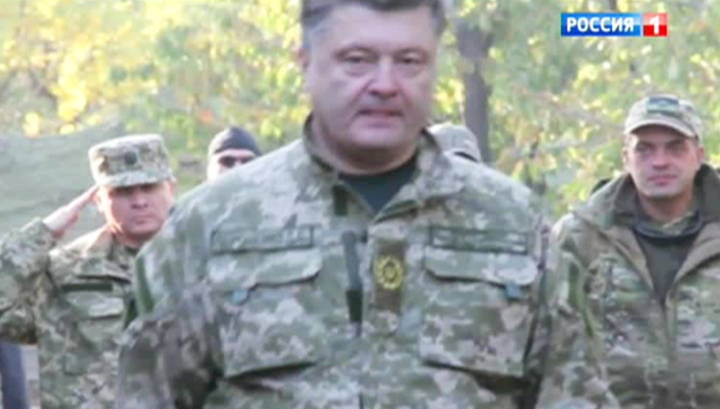 Last week, the head of the Security Service of Ukraine Valentin Nalyvaichenko was punctured. In an interview with Petro Poroshenko TV channel, he suddenly spoke of the Malaysian Boeing that had been shot down over Ukraine. Actually, not his topic. Never in any country in the world has the head of the special services conducted an investigation into the crash of a passenger plane. For this there are special bodies and international commissions. But then Nalyvaichenko, coming out of the barred building of the SBU on Vladimirskaya, where the CIA occupies a couple of floors, suddenly appeared as the head of the investigation and immediately stinked.

"It should be determined who will be responsible for compensating the relatives of the victims, that is, those Russian servicemen who used the modernized Buk-M missile system, which was brought from Russian territory to Ukraine. Ukrainian investigators need to fulfill the plan developed jointly with the Netherlands and other participants in the international investigation, to arrive at the scene and find what we lack, - fragments of a specific missile of a specific "Buk", said Nalyvaychenko.

In other words, a plan has been drawn up, we will find what we need. That is, what is not needed, we will not find - this is about the upcoming SBU operation at the suggestion of colleagues from the United States. That is, they did not go to the place yet, they still didn’t find anything out of what is “not enough” for the version of Russia's guilt for the catastrophe, but the conclusion is already predetermined.

The stupidity of Nalyvaychenko also lies in the fact that he speaks about the installations "Buk-M". There are simply no such weapons in Russia. All "Buki-M" - Ukrainian. Commenting on the passage Nalyvaichenko about the "Buk-M", a source in the Russian General Staff said: "As for the statement of Mr. Nalyvaichenko about the" modernized Buk, the speech, apparently, is about the anti-aircraft missile system, which was really modernized by the Ukroboronprom enterprises " . We know about these works with "Buk" in Ukraine. By the way, at the end of June of this year, this information was confirmed by a message on the official website of the Ukrainian military department about the deployment of the modernized Buk complex on combat duty.

But Nalyvaychenko has a plan! According to him, they will now present some kind of steel pellet, declare it a striking element of the Russian rocket, and then pass to the State Department, where the world will be frightened by the already cheerful Jen Psaki, where it is not clear where the piece of metal is taken from.

However, not even a piece of metal, but a muddy photo of a piece of metal that anyone can watch on the Internet before the Nalyvaychenko people go to the Boeing crash site. While there were not. The photo is already there. Those interested can familiarize themselves with it on the website of CyberBerkut.
Meanwhile in stories with Malaysian Boeing - new and very unexpected turns.

All points over the "i" in the question of who and what brought down the Malaysian Boeing, President Poroshenko set. In Kharkov University, he came to communicate with students. The most interesting thing happened when he entered the office, where they train specialists in the management of Buk anti-aircraft missile systems. The president, of course, knew that he was being shot, but apparently he thought that without sound.

"Is this the same complex that was used to bring down the MH17?" - Poroshenko asked.

MN17 - the side number of the Malaysian liner, shot down over the Donetsk region. Apparently, realizing the strangeness of the question, no one answered Poroshenko. Subject immediately transferred. Further, the president with a tense face, already silently, watched how students master radar technology. After, speaking from the podium, Poroshenko 15 minutes thanked the leadership of the university for the fact that it was graduates of Kharkov University and it was in July that they did what the so-called anti-terrorist operation would be impossible to do.

The crash of Boeing occurred on July 17. It was at this time that graduates of Kharkov University actually worked in the ATO area. One of them - Alexander Gavrishuk. In 2010, he graduated from the faculty of anti-aircraft missile forces of Kharkov University, based in the area of ​​Ilovaisk - this is about 30 kilometers from Hrabovo, where the airliner fell.

Yury Muzychuk, a colleague of Gavrishuk, is also a graduate of Kharkov University. I posted a video on my page on a social network. The whole calculation - 7 machines, including 4 launchers "Buk" are preparing to perform tasks. For this operation or some other, but President Poroshenko and the graduates of Kharkov University promised material assistance.

For the entire time of the visit, Poroshenko did not explain where he got the information that the Malaysian airliner was shot down by the “Buk”, and in addition an exact modification of the M1.

Neither Ukrainian investigators, nor international air safety specialists at the site of the crash of the fallen plane. What is more striking is that in the Ukrainian document exchange, in a secret report signed by the head of the Air Defense Forces and the Commander of the Land Forces of Ukraine Igor Zorin, photos appeared where the black spot is called "a fragment of an anti-aircraft missile fragment." It is important to note: the information appeared at the same time as the head of the SBU made a statement that the plane was allegedly shot down by a Russian rocket.

The document on the Internet published a group of Internet activists "CyberBerkut." What is called the Buk missile fragment is about 2 centimeters in length, one and a half wide, and about one and a half in thickness.

"According to the shape, deformation of these fragments, it is impossible to conclude that they belong to at least some warhead of any of the missiles. Any fragment, any piece of iron can be photographed and foaming at the mouth to prove that this piece of iron belongs to some warhead zenith missile complex ", - said Alexander Maslov, in 2004-2009 years - Chief of Staff of the military air defense of the Russian Armed Forces, Lieutenant-General.

If you look closely, it is clear that a piece of metal, if it is a metal at all, is very crumpled, which is very surprising for Russian experts.

“The hardness of the metal from which the striking elements are made is such that they pierce the hull of any aircraft through without being deformed. The photographs presented are supposedly elements that hit the liner - this is a direct fake that contradicts the elementary laws of physics,” the military expert, chief editor said. magazine "National Defense" Igor Korotchenko.

Ukrainian military experts did not limit themselves to the definition of the warhead alone: ​​they went further and found out which complex they had fired from.
“Analysis of photographic materials gives grounds to assert that the deformed fragments placed on them are striking parts of the 9H314 warhead of the 9М38 anti-aircraft missile,” their document says.

Neither the “Buka” nor the “Buka МХNUMX” are in the Russian army, much less the militia of the Donetsk and Lugansk people's republics. Understanding this, the Ukrainian side probably kept the document secret for two months - it is dated August 1. Why?

“The modifications of the Buk anti-aircraft missile systems listed in the texts of the document are routinely in service with the Ukrainian army only. After the collapse of the USSR, the Buk anti-aircraft missile complexes, inherited by the Ukrainian army, were actually on the territory of the Kiev and Carpathian military districts. around 70 such launchers ", - said Igor Korochenko.

Another important point, given that the document was signed in early August: the Ukrainian side had a special relationship with the international commission that is conducting the investigation. The materials of the international commission, apparently, were secretly delivered to the Ministry of Defense of Ukraine, and specifically to Colonel Igor Zorin. It was he who signed the secret report.

Although the topic was not his, Zorin himself in his specialty to such long-range anti-aircraft missile systems, such as Buk, had nothing to do.

"Mr. Zorin, who signed this document, who is now the head of the air defense of the Land Forces of Ukraine, graduated from the Poltava Higher Military School, which studied short-range air defense systems. This person performs either a direct order of the senior commander or participates in some games that are also not aimed at finding out the real situation, and creating a certain background of public opinion, "said Alexander Maslov.

Whether the experts will appear at the crash site of Boeing is a big question. New data from an international investigation, members of the commission said, will be only a year later.