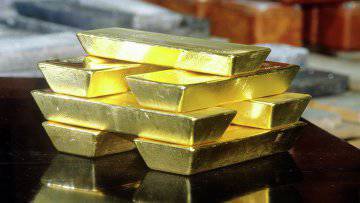 Russia, which is in fifth place in terms of foreign exchange reserves, has begun active buying up of gold. According to the IMF, its gold reserves have increased significantly over the past five months. For this indicator, the Russian Federation has already overtaken China and Switzerland. The fact is that Russia has concerns about the dollar and the euro in connection with the sanctions caused by the situation in Ukraine. Against the background of increasing debt obligations of leading countries, the Kremlin is trying to reduce financial risks through the redistribution of investment in gold.

The IMF said that Russia's gold reserves at the end of August amounted to 1112,5 tons. Since January, it has increased by 77 tons, that is, it has grown by 7% in seven months. The share of gold in gold and foreign exchange reserves increased from 8,3% to 9,8%.

This was affected by the deterioration of relations with the West in connection with the Ukrainian crisis. After the March annexation of Crimea, the United States and the EU imposed anti-Russian economic sanctions. Defense and other enterprises lost the opportunity to pay in dollars. There is a danger that the new sanctions will already hit energy exports, the calculation for which is also carried out in dollars.

70% of Russia's foreign exchange reserves are dollars and euros. The Putin administration, which has embarked on an exacerbation of the confrontation with the United States, decided to "reduce its dependence on these currencies in order to counter sanctions." Reform of foreign exchange reserves was accelerated. On the one hand, the Russian Federation began to buy more gold and Chinese yuan, and on the other, to reduce the share of dollars and US government bonds in its reserves.

The decline in gold prices contributes to this process. The market continues to sell gold, which, due to the forecast of the Board of Governors of the Federal Reserve System that interest rates will soon rise, does not pay interest, and therefore in September its price fell to the lower limit for the first time this year. As a result, Russia was in favorable conditions for buying gold.

Experts believe that the Russian Federation is trying to avoid the negative impact of Western financial problems on the Russian economy. Putin’s authority, which managed to avoid financial complications from oil revenues, is watching the West’s increase in debt obligations with concern. It can be said that by increasing the gold reserves, which is considered an “international currency” and which is not affected in any way by the financial problems of the state, Russia hopes to overcome the upcoming global financial crisis.

During an economic forum in St. Petersburg in May, President Putin told reporters that "it is important to accumulate gold and foreign exchange reserves in a rational and safe way." Most experts believe that in the coming years, Russia will continue to buy gold. It is believed that by the end of the year, the Central Bank will acquire more 200 tons of this precious metal, since so far the share of gold in Russian gold and foreign exchange reserves is relatively small: compare with France and Germany, where it is 60%.

China, strengthening economic relations with Russia and criticizing anti-Russian sanctions, has also been increasing its gold reserves in recent years. If the two major powers that are in conflict with the West continue to switch to gold, the position of the dollar, which is the key currency, may falter.