Do you want to avoid war - get ready for it

October 8 2014
43
The other day on the channel "Vesti" Alisa Romanova’s video titled “China Prepares for War with Japan and the West.” One of the famous Chinese generals explained the philosophy of the Celestial Empire in one phrase: "To avoid war, you must prepare for it." Here China is preparing. But politics is peaceful: "China has always been peaceful." 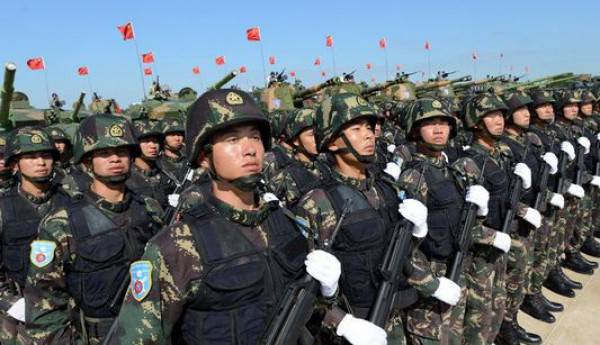 An interview with a Chinese general appeared on Chinese state television. Sun Xijin was not so much a military as a philosopher. This is understandable, if we recall the long Chinese history. In Celestial, not so much talk about today or tomorrow, as planning for the ages.

It is said correctly - in order to catch up with the USA, the Celestial Empire will need an incredible jerk. Namely, the United States has chosen, as is known, its Asia Pacific strategic priority in the second decade of the 21st century. And here it is not with Vietnam that they “intend to sort things out in case of anything.” In Beijing, they understand this perfectly well, whatever the current temporary owner of the Oval Office says.

Vesti reports that fragments of an interview with the general were shown in Chinese the news, and then on the CCTV channel broadcasting abroad in English. The news that swept the whole world cannot be called secondary.

The official indicator of the increase in the military budget of China in the 2014 year, as they say, inspires fear: there is an increase of 12,2% (to 800 billion yuan). Rockets submarine "Jin", it turns out, can get Alaska.

Sun Xijin believes that China has the right to protect public interests at sea.

“We must protect our maritime interests, especially if we are capable of it. We must build a powerful fleet to protect our rights to the sea. Our direct responsibility is to cooperate with countries around the world in order to guarantee accessibility and security in common oceans, ”the Vesti quoted the general as calling both of his posts: Sun Tzu, Chairman of the Society for the Study of the Art of War Academy of Military Sciences of China.

So, neither more nor less: the Celestial is taken to "guarantee availability and security in common oceans."

Presumably, these “accessibility and security” do not concern the United States, but the People's Republic of China.

Comrade Sun Xijin convinces his opponent with the thesis: "To avoid war, you must prepare for it." This is a quotation from a treatise on the war, written two and a half millennia ago by Sun Tzu.

The general is no stranger to specifics. The island question is what worries official Beijing, and, therefore, the general. After all, the generals, as you know, carry out orders.

“The modernization of the Chinese army is aimed at protecting China’s statehood and its territorial integrity. As the PRC Chairman Xi Jinping says, not a single inch of the land, which our ancestors handed over to us, should not be seized. Some Western countries are constantly trying to get together in the so-called alliances to challenge us. The Taiwan issue, the situation around the Diaoyu Islands and the South China Sea all threaten integrity. And what would you do to be silent? ”The military man said in an interview.

The general recalled that the main US ally of the United States in the region, that is, Japan, sharply increased defense spending.

The Chinese general calls the policy of Tokyo "parochial reasoning." In his opinion, the Japanese "even deny the idea of ​​the appearance of any strong adversary among the neighboring countries."

As for Russia, the general did not say a word about it. Probably because today it is an ally for the Middle Kingdom.

The statements of the general, kindly filed by Peking in English, did not appear in a vacuum.

In recent weeks and months, Washington has repeatedly stated that the concentration of Chinese forces in the western Pacific Ocean annoys the United States.

This is not surprising: the White House still claims hegemony not only on this section of the planet, but throughout the Earth. The growth of the Chinese "threat" is therefore not embarrassing, but annoying. Therefore, in order to reason with China, Washington supports the territorial claims of its regional allies, and among the first, the Japanese.

However, this support has recently been limited to declarations. The White House is quite cautious in Chinese matters.

The White House now needs to solve problems: a) in the Middle East, where the heads of American and other journalists from democratic countries are cut off; b) in Ukraine, where Putin has sold himself to the point that he is about to capture Canada (information from leading Canadian media); c) in his own country, where the presidential rating is rapidly going down, and not only the Ministry of Internal Security, but even the Ministry of Agriculture is arming itself to the teeth.

China, on the other hand, makes good use of this political pause and is engaged in the development of disputed sea areas.

Recall, back in June, the PRC began to pour and concrete artificial islands in the disputed area of ​​the South China Sea. On the island of Spratly claim, in addition to China, Brunei, Vietnam, Malaysia, Taiwan and the Philippines. But it seems that soon there will be no more contenders, since the Chinese have gathered on the island to build an air base.

In June, the mayor of the Philippine municipality of Kalayan, Eugenio Bito-Onon, told reporters that the Chinese are working "without stopping" and that the creation of the islands "will allow China to fully control the South China Sea."

Indeed, the Chinese builders on the Spratly Islands lift tons of stones from the seabed and dump them on reefs and underwater rocks. Then the stones are fixed with concrete.

Chinese excavator works in the Spratly archipelago all day and night. No one has any doubt that the Chinese are drawing new maritime boundaries.

And not only with the dredger China manifests itself in recent months.

Another argument for Washington is the SCO.

In September, a summit of the Shanghai Cooperation Organization was held in Tajikistan, and earlier, at the end of August, the joint SCO anti-terrorism military exercise "Peace Mission 2014" was held. They did not pass anywhere, but at the Chinese Zhuzhihe proving ground (Inner Mongolia, an autonomous region in the PRC). The maneuvers were the largest large-scale joint exercises of the armed forces of the SCO member states in the entire history of the organization.

At the Zhuzhihe training ground, the Chinese created unique conditions for practicing urban combat skills. Several blocks with houses, a bank, a cinema, a supermarket, a post office, administrative buildings, road junctions and so on.

Large-scale exercises confirm nothing less than Russian-Chinese cooperation in the military field. And this is also a hint by the United States that if Washington has an ally Japan, then Beijing has Russia.

Gas cooperation between Beijing and Moscow can be put in the same piggy bank. Especially when you consider that the sanctions that Washington "persuaded" Europe contributed to it contributed to it.

That is why the Chinese general did not say a word about Russia. The task of the general - to cope with opponents. And the allies will shake hands with politics.