Eggs of the head of the NBU, misunderstood Vitaly and ATO 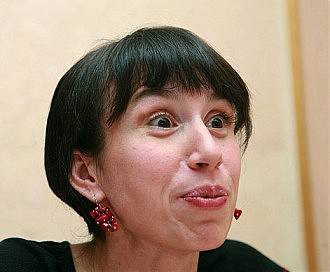 There are election boards with scary aunts on the sides of the road. Even prostitutes on Brovarsky Avenue are embarrassed to stand next to the “face” of Tanya Chernovol. The one who had a faulty Chinese video recorder who independently edited the recording of the attack of seven bloody hirelings of Yanukovych on an auto activist. Yes, and Yulia Vladimirovna, despite the sophistication of the "fotozhop", is impressive with the asymmetry of the face and the clearly overlooked gun above the upper lip.

I think this is a barbaric provocation of enemies. It was they, the dregs, who placed the icon in the St. Michael's Cathedral in such a way that Vitali Klitschko missed a straight line to the head from the salary and for a while looked like a real idiot. Which, however, is his usual condition. Judging by the deep sound that came at the moment when the mayor's food intake organ came into contact with the icon, Vitaly’s skull was about a third full. I do not know what. But in fact, it is impossible to mock Klitschko, as well as Tymchuk, who could, this time, judging by a fresh report, fifty times a night.

Klitschko is not as stupid as it seems at first glance. In any case, he is familiar with the principle of uncertainty of Heisenberg, which he tried to tell enthusiastic viewers on the example of his own wife. According to this fundamental principle of the whole, blah, of quantum mechanics, two characteristics of a particle cannot be determined simultaneously: velocity and position. If there is speed, there is no position, because she, bitch, has long flown away. If there are positions, there is no speed, because when a particle is standing, there is naturally nothing to measure. Some females may argue that there is something, and they will be confounded. Same quantum mechanics, instead of a metal ruler in a man's toilet. It is necessary to think.

Vitaly absolutely answered the question about the physical location of his spouse: "She is everywhere." He explained in detail the speed of her movement around the world, and anyone who has minimal knowledge of the bitch, quantum mechanics, can make the right conclusion: the Heisenberg principle works. Therefore, even though Vitali seems to be a moron, in fact is not as simple as it seems. In its large skull, esoteric knowledge of modernity is hidden, sporadically bursting out in rather primitive forms. Remember his canonical phrase “not everyone can look at tomorrow with confidence, more precisely, not only everyone can do it, very few people can do it”. How many mocks were in social networks about this. But Vitalik tried to explain the basics of the theory of relativity by Albert Einstein, who is undoubtedly proud that he is Ukrainian. Why Groisman can be proud, but Einstein is not? So what if he died? This is irrelevant.

Klitschko in paradoxical form outlined the dependence of time on the speed of light in the space-time continuum. The speed of tomorrow depends on the speed of movement of the subject looking into tomorrow relative to the speed of light, which is a constant value. Therefore, not everyone and further in the text. Vitali is simply far ahead of his time and is faced with a cold misunderstanding of those around him who are trying in every way to humiliate the genius. Yes, he hit his head in the presence of a large number of people. However, what does the saying “force a fool to pray to God, he will break his forehead”? In fact, this is a provocation of the Russian special services, which forced Klitschko to lose orientation in the current space.

You know, after the Altai armored police division invaded Ukraine, which gave irrefutable evidence on Facebook, you should be extremely cautious about facts. Especially to those of them that are connected with the activities of politicians and state employees that are especially popular in the electoral environment.

For example, I was surprised to read the message of the respected news agency Interfax-Ukraine about the eggs of the head of the NBU Valeria Gontareva.
Of course, these are not her eggs, but some people who have performed a performance with the house of the country's chief banker. At five o'clock in the morning, a group of unknown persons threw the habitat of Gontareva with three trays of eggs and bags of paint. For some reason everyone thought that it was an attack. In fact, delighted depositors of Ukrainian banks in such an unusual way expressed their admiration for the NBU macroeconomic policy. Eggs, as we know, symbolize the stability of the exchange rate and a balanced demand for dollars. I just don’t understand why the mainstream media serves this act of admiration as an act of vandalism? In the end, after all, Gontareva was stuck in a trash can.

In addition, Valeria herself is optimistic, she is going to fly to Washington on Wednesday to meet with some woman from the IMF. She says that as soon as we restore our industrial potential, the exchange rate will be set at the level of UAH 11,7. for the dollar. That's all. The eggs were just right. The industrial potential is already recovering, as the president looked at the Zhytomyr armored plant, located near the former tuberculosis dispensary and the current mental hospital, and the ATO forces completely control the Donetsk airport. So in the news said. Moreover, I personally met a person who believes in the news. He says: "I do not believe what they write on the Internet, I have watched the news and now I know." The smartest person, only throws garbage out the window, and, of course, a patriot. There is nowhere to sample.

Meanwhile, the situation in the ATO zone is developing positively. U-armies brought warm pants of the 1973 model of the year. The institute of military chaplains, which had already been congregated by many, began to work. An organic complement to the chaplains are the military prosecutors, who have been granted the right to do everything right on the spot. Therefore, the life of the army became orderly and logical: they collected, imprisoned for desertion.

The “antiterrorist operation” is already listed in the Guinness Book of Records as the longest antiterrorist operation in the world. No other country has conducted such a large-scale operation, which resulted in the retreat of the ATO forces from areas controlled by a handful of separatists. Closer to the parliamentary elections there will be new heroes, whose exploits will be included in textbooks stories as amended by the press center of the ATO. There is no, even the slightest doubt. We have much to be proud of: Klitschko, Chernovol (Tatiana), Paruby, Avakov, Yatsenyuk. These people before our eyes are writing the history of modern Ukraine within the borders of 2014 of the year.