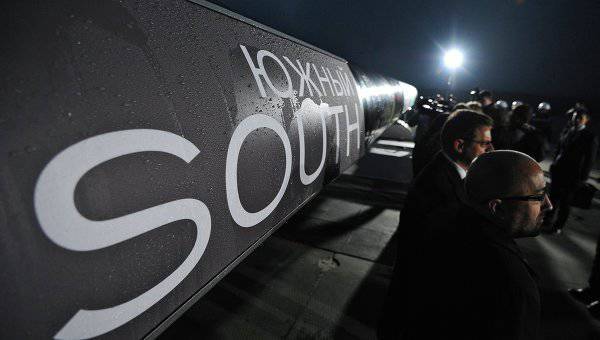 Attempts by the United States, the European Union and Zionist plutocrats to isolate Russia and harm its people with the help of economic sanctions are doomed to failure if the latter news from Central and Eastern Europe are true.

According to the German newspaper National-Zeitung, Austria showed the nose to the Brussels bureaucrats, bringing the moment of construction of the gas pipeline, which will allow to supply natural gas to this country, bypassing the territory of a politically unstable Ukraine. The South Stream gas pipeline is part of a multi-purpose project to diversify energy supply channels, launched in 2007 by the Russian oil and gas giant OAO Gazprom and aimed at increasing the volume and stability of energy supply to the European continent.

During the visit of Russian President Vladimir Putin to Vienna, which he completed in June of this year, the Austrian energy concern OMV signed several contracts with Gazprom for the construction of the Austrian section of the gas pipeline, through which natural gas will start flowing into this Central European state by December 2015 of the year. According to numerous branches of this gas pipeline, Russian gas is also planned to be delivered to Italy and Germany.

The Russian section of this gas pipeline has already been laid along the bottom of the Black Sea, and currently its section is being built, which passes through the territory of Bulgaria.

Hungary, Serbia, Croatia and Slovenia, as well as, possibly, Greece and Montenegro, can also benefit from this project. Some of these countries are completely dependent on the supply of Russian energy resources. In addition, Gazprom has entered into partnership agreements with corporations from other European countries, such as France.

The US imposed economic sanctions against the Russian bear, based on the false assumption that Putin is responsible for political unrest in Ukraine. The United States forced the EU apparatchiks, who did not want this, to also impose sanctions.

However, all this is only a facade, since most of the continental European states have serious trade interests associated with Russia. The US and European Union sanctions are likely to harm only our European “vassal allies,” and not Russia at all, because Russia is now actively seeking alternative markets, particularly in China.

Austrian Foreign Minister Sebastian Kurz rejected the criticism of the representatives of the European Union: “We do not need to increase the number of suppliers. On the contrary, we need to diversify the routes by which energy resources are supplied to us. ” In other words, it is necessary to close the question of the Ukrainian bottleneck once and for all.

At present, the European Union has managed to persuade the Bulgarian government to suspend the construction of the South Stream through the territory of this country under the pretext that Russia's bilateral contracts with companies of partner countries violate EU regulations prohibiting gas producing companies to own a gas pipeline . However, in this case, these restrictions are aimed at pumping out both Russian gas and Russian profits to the detriment of the interests of European workers.

The Bulgarian government decided to suspend construction immediately after a visit to this country by the wandering war bomber, Senator John McCain and other belligerent senators.

“McCain appears everywhere where conspiracies against Moscow are built,” wrote the author of an article in the National-Zeitung.

Meanwhile, all the countries participating in the South Stream project are determined to complete it, therefore, most likely, the European Commissioner for Energy will not be able to hold back the project for too long. According to some rumors, it is quite possible that Gazprom will soon conclude an agreement with the European Union.

OMV General Director Gerhard Roiss said earlier: “I think everyone understands that Europe needs Russian gas, and I believe that the European Commission also understands this.” According to him, Gazprom has remained a reliable partner over the course of 50 years, so he expects profitable cooperation over the “next 50 years.”

The United States and Israel - if we ignore political reasons - they want to get the European market to sell their own natural gas, squeezing Russia out. However, their attempts are not crowned with success, because the European port infrastructure is not adapted to cope with any significant supply of liquefied gas, which will cost Europe much more expensive than the supply of Russian gas.

The volume of gas reserves in Russia reaches 44 trillion cubic meters, and by 2019, it plans to pump around 63 billion cubic meters of gas annually through the South Stream - in addition to the volumes it already supplies through its two northern pipelines. This is enough to provide 38 with millions of homes with energy.

Ironically, the militaristic imperialism of the United States in Eastern Europe and their desire to constantly intervene in the affairs of other sovereign states was dealt a powerful blow by the force that once made America a great power, namely, free enterprise and nationalism.