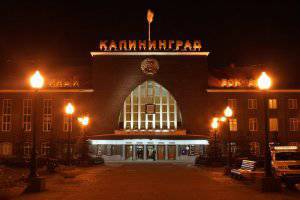 The idea expressed by President Medvedev during the St. Petersburg International Economic Forum to create the Moscow federal district seemed to inflame the local parliamentarians ’imagination. While Moscow is pondering ways to implement the "construction of the century", in the most western Russian region they are already rushing to take an example. True, peculiar.


Kaliningrad lawmakers prepared a draft version of the draft law on granting this region the status of a federal district or a separate federal territory right for the visit of the head of state. Now, I recall, this area is part of the North-West Federal District, although it is separated from it geographically, as well as from Russia. In the very fact of a physical (but not state!) Department, we suppose there is nothing extraordinary. Alaska is geographically separated from the United States in the same way (some islands from Russia and the United States are not counted, they are not separated by states), but it is difficult to imagine a situation where Governor Sarah Palin submits to Barack Obama a “petition” about a separate state status. The creativity of our other local legislators is simply fascinating.

Thus, the regional deputy Solomon Ginzburg, who belongs to the group of developers of the draft law, decided to go beyond the simple separation of the Kaliningrad region from Russia and proposed ... unilaterally to cancel entry visas to the territory of the Kaliningrad region. Here a completely reasonable question arises: does Ginzburg perceive Kaliningrad land as part of Russia? If so, then it turns out that a separate deputy in all seriousness (and, as is supposed a priori, in his right mind and good memory) actually suggests abolishing entry visas to Russia as such. Strong! I recall, of course, that similar ideas were repeatedly voiced, in particular, by Prime Minister Vladimir Putin. But being a prime minister, not a deputy of the regional legislative assembly! And it is clearly not unilaterally, when Russia cancels entry visas for the EU, but the EU for Russia - by no means.

But it seems that the authors of the bill do not conceal their intentions to make the Kaliningrad region actually sovereign, although on paper they denote this as streamlined as possible. Otherwise, how then can the following explanation given to Nezavisimaya Gazeta be interpreted: they say, separating the region from the rest of Russia will help “protect the local business from the flow of departmental instructions that prevent Kaliningrad’s economy from developing”?

Of course, one should pay tribute to the almost childlike sincerity of the authors of the document. It inevitably refreshes in its memory the speeches of party bosses from the then Soviet republics at the dawn of “new Russia”. This was the forerunner of the ever-memorable “parade of sovereignties”, which the (sovereignty) republics took (each for themselves) as much as they could carry. And they talked about the same with almost the same words: departmental instructions then oh, how farms were to the farms on the ground! Sovereignty received, and then as soon realized it, gasped ... but it was already late.

Déjà vu in politics is a familiar thing. History generally spiraling, and "nothing is new in the sublunary world." With President Medvedev during his visit to Kaliningrad, the idea of ​​a separate federal district with sovereign ambitions, as can be judged, has not yet been pronounced in detail. The President, as befits the head of state, received a naval parade, and the road to the magnificent motorcade was decorated with freshly painted facades of houses ... That is, everything is according to the classics. But someone still can not wait to twist the spiral of history.

Aleksey Mukhin, General Director of the Center for Political Information, in an interview with the KM.RU columnist, gave a general assessment of the initiative of the Kaliningrad deputies regarding the isolation of the region:

- This initiative of the Kaliningrad legislators is objectively unjustified. I believe that in the end it will be judged at the top as inappropriate. At the same time, I think that both the Prime Minister’s office and the President’s Office perfectly understand the concern of the Kaliningrad authorities about the need to give the region a special status. Recently, the population in the Kaliningrad region had difficulties in obtaining European visas and a number of others. These difficulties are known to all, only the acquired status of the federal district is unlikely to be able to resolve them.

I suspect that the interest here is above all, of course, monetary, since the creation of a new federal district implies, among other things, the allocation of additional funds, including for the support of the officials of this region, so in this light their concern is also understandable. But another thing is that this will inevitably fall as another burden on the federal budget, and I think that Finance Minister Kudrin will clearly not be delighted.

- According to the thought of one of the Kaliningrad parliamentarians, Solomon Ginzburg, the Kaliningrad region would not be a bad thing to unilaterally cancel entry visas for EU countries, that is, regardless of Russia. As if this is not a separate federal district, but already a separate state.

- The fact of the matter is that any direction towards the sovereignization of this territory has its own pitfalls. This process will certainly be supported by some interested parties in the same Germany, in Poland, in the Baltic countries. In one way or another, they are interested in the fact that the Kaliningrad region will eventually become more and more separated from Russia. The Baltic countries initially critically assessed Russia's right to the Kaliningrad region, so that any form of sovereignization of this region would certainly be perceived by them rather as a joy.

At the same time, I suspect that ideas of this kind are deliberately thrown into the information space just on the eve of the electoral cycle, with the simple goal of simply increasing the references to some politicians and at the same time proving to Moscow that everything is okay But judging objectively, such initiatives ultimately lead only to undermining statehood and simply worsen the connection of this territory with the "mainland".

We are in Yandex Zen
Stalin and Mao are listening to us! Towards the June 2016 visit of Putin V.V. to Beijing
Military reform as an integral part of the security concept of the Russian Federation: Systematic dynamic assessment
26 comments
Information
Dear reader, to leave comments on the publication, you must to register.