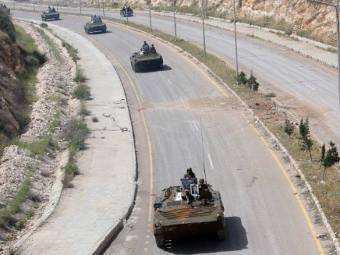 The situation in Syria is becoming increasingly complicated - the West is increasing its pressure, and in the state itself blood is shed. Syrian troops on the morning of July 31 began storming the major city of Hama, they were sent to the city a few weeks ago, but they did not go to storm the city, confining themselves to sweeping suburbs. Hama is one of the largest cities in Syria, with a population of over 600 thousand people. He became one of the center of anti-government speeches, this city was previously at the epicenter of the bloody events - in 1982, there began an uprising against the regime of Hafez Asad (father of Bashar al-Asad), he was drowned in blood.


According to the Syrian authorities, unrest in Hama was triggered by foreign intelligence services, so the ambassadors of the United States and France in Syria visited 8 in July. After that, Damascus accused France and the United States of interfering in the internal affairs of Syria. Therefore, on July 20, Damascus demanded that foreign diplomats request permission in advance to travel around the country. Threatened to completely ban foreign diplomats from traveling around the country.

"Counter-terrorism operations" Damascus conducts in several cities - the troops entered Deir al-Zaur, and on August 1, began the sweep of the border town with Iraq, Al-Bukamal.

The Syrian opposition follows the footsteps of its Libyan predecessors - 16 July in Istanbul (another signal that Turkey made a decision to intervene in Syria) held its congress and created a “Council of National Salvation” to confront the regime of President Bashar al-Assad. It includes representatives of liberal and Islamist movements, as well as independent candidates. What a touching alliance - the West was able to unite completely opposing forces, showing the world that it can perfectly use both its liberals and the Islamists as its “fifth column”.

Did not stop the Syrian opposition and news on the introduction of a multiparty system in Syria. This 25 July said the Syrian cabinet ministers. It would seem that “dreams come true”, what more could the Syrian opposition and Western critics of “authoritarian rule” want? In fact, the monopoly of the Baath party on power in the country was abolished. In addition, the official control over the Syrian elections passed from the executive branch (Ministry of Internal Affairs, regional self-government bodies) to the judiciary. The Supreme Electoral Council, consisting of five judges appointed by the Supreme Court of the state, will oversee the election process. The next step for Damascus, according to the Lebanese newspaper Ad-Diar, is to introduce a provision for holding presidential elections in the Syrian state, with the participation of several independent candidates.

In July, the EU approved a new package of sanctions against Syria, four Syrian companies that are associated with the security forces of the country, as well as seven officials who, according to Brussels, are responsible for the use of violence against the civilian population, were subject to sanctions. Currently, they plan to expand the sanctions by adding five more Assad associates to the “black list”.

Israeli Defense Minister Ehud Barak 1 August reported that the end of the reign of the regime of Bashar al-Assad is very close, giving him a deadline of several weeks. Israeli President Shimon Peres at the end of July called on Assad to resign.

Their embassies in Syria have closed Qatar and Italy. The Italian Foreign Ministry proposed that "all countries of the European Union recall the heads of their diplomatic missions from Damascus." The UN is discussing the adoption of a resolution condemning violence in Syria, Western countries insist on this, but China and Russia are still against such a resolution. Beijing and Moscow oppose interference in the internal affairs of Syria.

What will lead the victory of the opposition in Syria?

As the example of Iraq, and a number of other Asian countries, shows, a country can be held in stability and in the world only by a strong authority, of a centralized, authoritarian type, with a strong leader. Otherwise, civil conflict awaits Syria, liberals and Islamists will not be able to get along peacefully, plus religious conflicts, the problem of the Kurds. Thus, the Syrian "Muslim Brotherhood" is supported by Turkey and Saudi Arabia. Turkish Prime Minister Teyip Erdogan has repeatedly demanded that Syrian President Bashar Assad stop the pursuit of this extremist organization. As a result, if the state comes out of this situation, the victims will be much more than with the rigid restoration of order by the central government. Yes, and the independence of Syria, with the victory of the opposition will have to forget.

Considering the experience of revolutions in a number of countries, it can be said with iron confidence that the standard of living of the population will drop dramatically - serious problems will arise with the education system, medicine, food, work, etc.

It is clear that for the West “controlled chaos” in Syria, by the way, the anti-Western regime will be destroyed, the ally of Iran will be crushed, the destruction of Syrian statehood fits perfectly into the picture of “Eurasia in flames”.

We are in Yandex Zen
"Army Games". As the Venezuelans tank drowned. Photo report
Syria: Americans scare themselves, and Asma Asad buys chairs
14 comments
Information
Dear reader, to leave comments on the publication, you must to register.