US left without a gold reserve 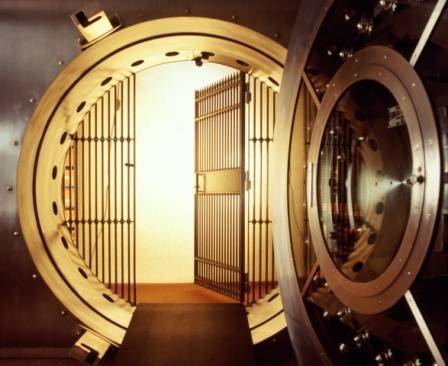 In the beginning of summer, a scandal erupted in the media over the sale by the US Treasury Department of fake gold bullion to China last November. When the specified batch was received, the Chinese government ordered a special analysis of the purity and weight of the gold bars received. As a result, it turned out that the ingots were fake.


It is also known that 26 Jun. Ron Paul, a US congressman, proposed to audit the entire gold reserves of the United States. But the government prevented this by all means. This mysterious refusal to conduct an audit and scandalous история with fake gold sold to China has further confused the situation.

But back to the fake American gold sold to China. These "gold" bars were cast in the United States, and were stored in the famous Fort Knox for many years. The Chinese government immediately launched an investigation and issued a statement, which subtly hinted at fraud by the US government. The registration data of this batch of gold bars indicated the fact that fake bullions came from the Fed banks during the administration of the Bill Clinton administration. It was then that, directly by request, the Fed’s bankers were cast from 1.3 to 1.5 million tungsten tiles weighing 400 ounces. Of the total, 640 thousands of these tungsten tiles are plated with gold and sent to Fort Knox, in which they remain at the moment. According to the data obtained during the investigation, the remainder of the specified 1,3 − 1,5 million tungsten pigs, each weighing 400 ounces, was likewise covered with gold film and then sold (like real gold) in the international market. Besides the fact that fake gold was put in the US federal gold reserves, the Fed’s bankers deceived the world market. The cost of the so-called Golden Clinton Scam is estimated at 600 billion dollars.

The scam is also indicated by the fact that among the possible and very real reasons for inflating the grandiose sexual scandal with the participation of the former head of the IMF, D. Strauss-Kahn, was the announcement of information on which the US has no gold reserves. Dominic Strauss-Kahn "began to express growing concern" since the United States slowed down the shipment of 191.3 tons of gold to the IMF, based on the agreements reached, for use as a kind of alternative to reserve currencies. During his stay in the United States, Dominique Strauss-Kahn received directly from the CIA officers actual confirmation that the American gold reserves had disappeared. Of course, he was not lucky that he learned about the real situation with the US gold reserves. After that, D. Strauss-Kahn wanted to leave New York immediately, but he was simply slowed down with a similar “baggage” of information in his head. As a result, tungsten plates lie in Fort Knox, and the dollar is provided with only certificates that cost no real gold, exactly ZERO.

FedReserved: "We have no gold"

"Federal Reserve Admits: We Have No Gold"

The next dialogue between Congressman Ron Paul (Republican, Texas) and Fed spokesman Scott Alvarez leaves no doubt that the Federal Reserve has no gold to secure the US dollar. Most people using alternative news sources, they suspected this before, but now it is a fact.

The Federal Reserve does not own any gold at all. We do not own gold from 1934 of the year, so we did not participate in any deals with gold ...

In any case, we can analyze the basic facts and come to certain conclusions:

1. The widespread perception that the Fed has gold is false. The consequence of this view is the erroneous opinion that the Fed understates the gold holdings on its balance sheet, reporting only gold certificates at the legal price of 42,22 $. The American gold reserve, multiplied by the market price of gold, does not actually belong to the Fed, unless, if the Treasury defaults, but in this case everything is far from clear. The Fed really holds a debt claim for, in total, $ 11,1 billion, and it has a small chance to rise significantly in value if the Treasury overestimates its gold and continues the practice started under the Nominal Modification Act.

2. The fact that the Fed has no gold or claims for any gold means that the dollar lacks any security, apart from the building and equipment of the Fed. Dollars cost much less than many people think, and the Fed, with all its skill, is much more helpless in using assets and pursuing monetary policy in general. Overall, the clarification of Alvarez reinforces confidence in the high dollar value of gold.

An interesting perspective, and if this is true, then we can assume that the purchasing power of the dollar, from the point of view of gold, is much less than usually thought, is actually close to zero.

Our currency is not only not backed by gold, but in the case of a dollar meltdown, the only assets that provide the world's reserve currency will remain worthless poisonous mortgages bought out by the Federal Government in recent years from insolvent banking institutions.

The only thing holding the dollar at this point is trust in the market. When it leaves, everything else will go along with it ...

We are in Yandex Zen
Golden geopolitics. Why does Germany evacuate its gold from France and the USA
Gold and the "end of the world"
22 comments
Information
Dear reader, to leave comments on the publication, you must to register.