German character of the black continent 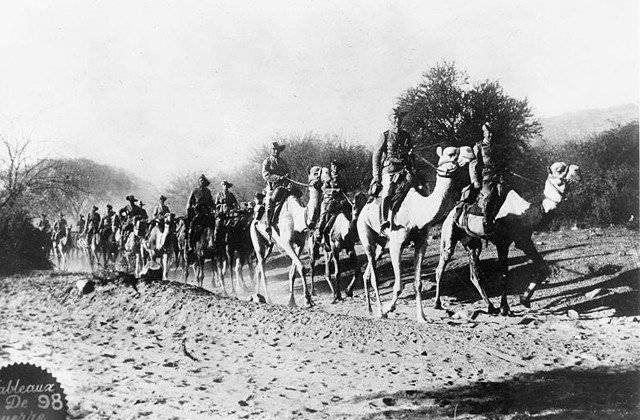 The most successful campaign of the First World German Army conducted far from Europe - in East Africa. Even the fighting operations of the colonial corps operating there ended a few days after the signing of the 11 November 1918 of the armistice in Europe. In successful battles to protect the entrusted colony and campaigns, his command did not think of surrender and learned about the loss of the country's war almost by accident.

Motherland can not help

With the beginning of the First World War, all the Asian and African colonies of Germany found themselves in complete isolation from the metropolis, in the depths of the vast British and French colonial empires. There were no chances for the Germans to get reinforcements and supplies. Therefore, the colony was initially doomed. However, the fate they have been different.

Of the Asian-Pacific colonies, only Qingdao was able to resist, however, which ended with the surrender of November 7 of 1914 of the year. In Africa, it turned out somewhat differently, although not everywhere.

In South West Africa (now Namibia), the Germans had about 2 thousands of troops and about 1,5 thousands of police officers. The British from the territory of the Union of South Africa could put up to 60 thousands of people. The problem for them was that South Africa was a synthesis of the British colonies proper and the Boer states occupied during the Anglo-Boer War. Although the Boers were on a formally equal basis co-opted into the population of the British Empire, among them were very strong sympathy for the Germans. Because of the handling of internal problems, the British were not able to start the campaign against the Germans only in January 1915. In the future, however, they were hampered, basically, only by desert terrain and long distances. The remnants of the German forces capitulated on July 9 on 1915. 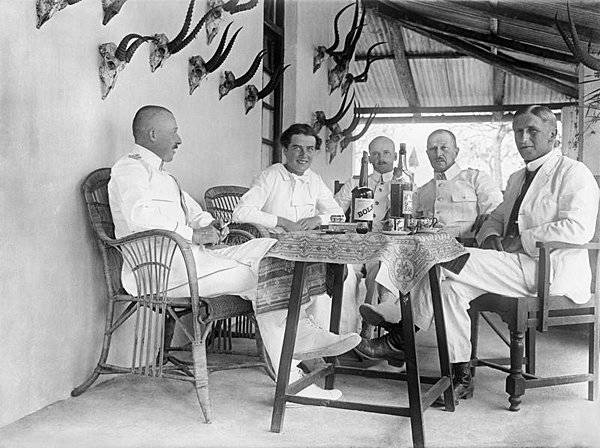 Paul von Lettow-Forbeck (left) on a veranda in East Africa. Photo: Imperial War Museum
In Togo, the Germans had no troops at all, only the police, because of which this very small colony was captured by the French in one day 26 of August 1914 of the year.

Very interesting events unfolded in Cameroon. Allies invaded here from all directions: the British from the west from Nigeria, the French and the Belgians from the north, east and south from Chad, Gabon and Congo. By the beginning of the war, the Germans had about 1,8 thousands of troops in Cameroon, 1,7 thousands of British, 7 thousands of French and Belgians 600 were against them. 6 September 1914 in the battle for the town of Nsanakong, the Germans defeated the British, throwing them back to Nigeria. But on September 27, the Anglo-French naval assault forces captured Douala, the economic capital of Cameroon, and German troops retreated to the central region of the country covered in jungle and mountains. At the same time, due to mobilization, the number of German troops increased to 3 thousand people, and the allies at the expense of reinforcements - to 25 thousand.

In April, 1915, the Germans had already raided the territory of Nigeria, trying to capture the English fort, but without success. The parties had to fight in the most difficult climatic conditions, and in such a situation, as a rule, it is easier to defend than to attack. However, the numerical superiority of the Allies was too great. They gradually captured the German fortified points. The last of these, Mora, fell only on February 16 of the year 1916. The remnants of German troops were interned in the Spanish colony of Rio Muni (now Equatorial Guinea).

Colonel Lettov-Forbeck goes on the attack

In this colony, by the beginning of the war, the Germans had 2,7 thousands of military personnel and 2,2 thousands of policemen, the overwhelming majority of Askari Aborigines, descended from mixing Arab colonists with local tribes. He commanded the German contingent, Colonel Paul von Lettow-Vorbeck. During the war, by mobilization, the number of personnel was reduced to 14 thousands of people. (by the end of 1915 of the year), of which at the time of the end of hostilities no more than 10% remained. The troops opposing them in total for the war had a population of 250-300 thousand people. Naturally, the British had absolute domination of the sea.

But it was the Germans who first began active operations in the north of the colony, on the border with English East Africa (present-day Uganda and Kenya). However, having received reinforcements from India, the British launched a counteroffensive. However, their attempt to seize the port city of Tanga in the north of Tanganyika in early November 1914 ended in a heavy defeat. As a result, by the end of the year, the Germans retained full control over the entire territory of the colony and even slightly advanced into British territory and raided the railways in Kenya and Uganda. 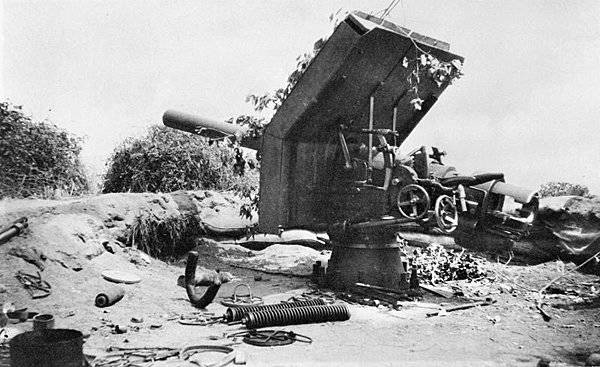 Guns from the German cruiser Konigsberg, installed on the ground to protect the city of Mwanza, Tanganka. Photo: Imperial War Museum

In the summer of 1915, thousands of Boers were transferred from South Africa to 15 in English East Africa (since the campaign in South West Africa was already ending). However, until the end of the year, clashes continued in the border strip, and the advantage in them was, rather, on the side of the Germans. Equally successfully they held the front in the west of the colony, against the Belgians from Congo (Zaire). Even at sea, the Germans were successful: the only cruiser “Koenigsberg” based in Dar-Es-Salaam, in September 1914, sank the English cruiser “Pegas” off Zanzibar, and also seized one English transport vessel. In the end, the British drove the “Koenigsberg” into the Rufiji River in Tanganyika. In a river battle with 4 English cruisers and 2 gunboats 11 July 1915, he was sunk. However, the Germans removed their guns and used them on land.

Thus, by the end of 1915, all the other German colonies had already been defeated (except for residual resistance in the south-west of Cameroon), but German East Africa was not only alive, but unscathed, retaining all of its not very small territory.

At the beginning of 1916, the British launched a serious offensive from the north. In March, a battle unfolded near the largest peak of Africa - Mount Kilimanjaro. Under pressure from superior enemy forces, the Germans began to retreat deep into their territory. In the middle of the year, the situation significantly worsened, as the Belgians launched an offensive from the west (from Congo), and the British opened another front in the south-west, advancing from the territory of modern Zambia. The problems of the Allies were created by the great African lakes (Victoria, Tanganyika, Nyasa), which broke their front into fragments, but for the Germans this was a weak consolation. Insufficient development of the road network and limited forces prevented the Germans from taking advantage of domestic operating lines. The British cut the central railway crossing the colony from east to west at the end of July.

The main German forces, having surrendered Dar es Salaam, were forced to retreat to the southeast. True, now and here they had an enemy: in March 1916, Portugal entered the war on the side of the Entente. In Europe, no one noticed her participation in the war, but in Africa it was the Portuguese who finally took Tanganyika into the ring, advancing up to 3 thousands of people to its southeast from the territory of present Mozambique. However, the Portuguese fought much worse than the Belgians, not to mention the British. Therefore, the Germans quickly drove them out of the territory of their colony. Moreover, in a sense, the entry of Portugal into the war became a blessing for African Germans: now they were where to go without being interned.

By the beginning of 1917, the Germans held the southeast "corner" of German East Africa. Here they lasted almost a year, inflicting a series of heavy defeats on the English. However, they were experiencing ever more acute shortages of food, heavy weapons, and ammunition. Therefore Lettov-Forbek decided to transfer the war to the territory of the nearest, while the weakest enemy - Portugal. At the end of November 1917, the Germans invaded Mozambique. 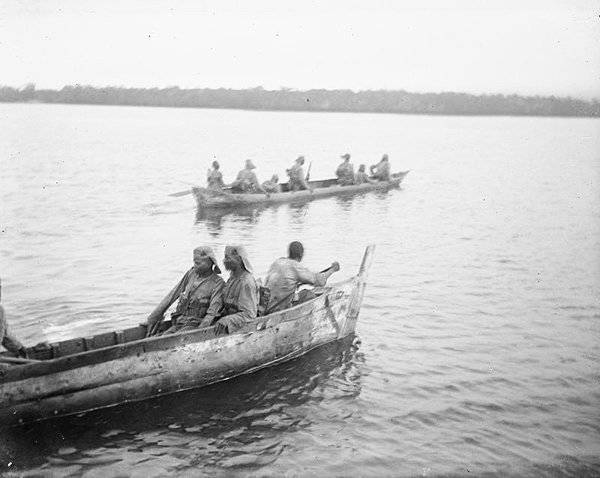 In Mozambique, the Germans were mainly engaged in the search for food, smashing the camps of the Portuguese army and seizing peaceful farms. In January, the British began to arrive in Mozambique, 1918, to help the Portuguese. For the first time since the beginning of the war, the Germans had the problem of the mass desertion of the Ascari aborigines, of which their army basically consisted. The reason for desertion was that the army had gone too far from their native places, and this was much worse for the natives than the war and camp life.

Nevertheless, the Germans managed to fight half the territory of Mozambique, reaching the Zambezi River in June, and a large number of modern rifles and ammunition were seized. However, due to the increased resistance of the enemy (first of all, the British, the Portuguese were completely incapacitated), they had to turn back to the north and move back. In September, 1918, they returned “to their native land,” passed through its southern part, and in November invaded British territory, Zambia. It was here that the 14 of November 1918 of the year - three days after the official end of the war - Lettow-Forbeck received a report on an armistice in Europe, that is, in fact, on the surrender of Germany.

By this time, the German forces were reduced to 1,3 thousand people, of which about 130 Europeans. Nonetheless, unlike their compatriots in Germany itself, they were ready to fight for quite a long time — the East African natives in some sense turned out to be greater patriots of Germany than the Germans themselves. A four-year epic Lettov-Forbek troops, perhaps, can be considered the best page of the German army throughout the First World War.