22 September 2014
74
On the day of arrival in Donetsk, a column with Russian humanitarian aid was launched a missile attack on the capital of Donbass. Three missiles of the “Tochka-U” complex fired from the vicinity of Artyomovsk in the capital of Donbass fell on the city. The first one fell on the Astor building materials plant, the second one was torn off in the immediate vicinity of the Skochinsky mine, the third one destroyed the state-owned chemical products plant and its warehouses. One day - two loads. The first is humanitarian aid from Russia for the needy residents of the city and the republic, the second is the deadly ballistic missiles from the leadership of Ukraine. This is a word about aggression ...

The blows were struck at the very time when the next armistice agreement was reached in Minsk between the conflicting parties.

And who specifically struck in Donetsk? The “unequivocal” answer to this question was given by the Ukrainian media: terrorists shot at Donetsk with rockets. And in this case, there is every reason to agree with the Ukrainian media. Of course, the terrorists. And how else can you name representatives of the Ukrainian law enforcement agencies who are in positions near Artyomovsk and who decided to strike at the city at the very moment when trucks with humanitarian aid were unloaded in Donetsk, and at the very moment when, on behalf of the current Ukrainian president, the ex-president Kuchma signed a memorandum on a cease-fire and the withdrawal of heavy machinery outside the city agglomeration. The terrorists are there! - Ukrainian media correctly noticed.

What informational alignment is observed after a rocket attack by the Ukrainian security forces of Donetsk? Firstly, this shelling once again proves that a truce is SUCH a truce ... Secondly, the 100500 desire of the Ukrainian newsreaders to issue Donetsk shelling for "they themselves have fired." I remember how at the end of July CNN aired a program in which materials were presented (referring to sources in the American security forces) about the use of the Ukrainian army "Point-U" on the positions of the DPR and LPR militia. The footage from the site of the fall of the rockets, already filmed near Lugansk, demonstrated that the rockets (many of which, fortunately, did not work) fell on urban areas. If the rockets had exploded, this would have resulted in a huge number of civilians wounded and killed.

Ukrainian lie in July was lowered on the brakes. What about today? How are things going with the fixation by representatives of the OSCE mission of outright aggression of the Ukrainian security forces against Donetsk? It would seem that the strikes of ballistic missiles at the time of the signing of the “conciliatory” memorandum should be immediately taken by the OSCE missionaries to a pencil with all the consequences. But... 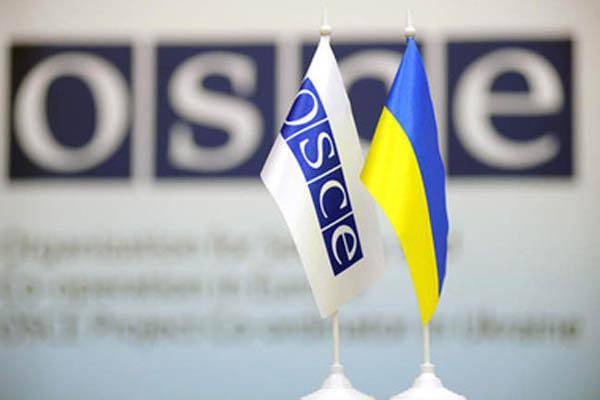 We read OSCE reports and find in them the following:

OSCE observers assess the situation in eastern Ukraine as calm. There is a partial restoration of the normal operation of infrastructure facilities.

Ballistic missiles bursting in a city in which hundreds of thousands of inhabitants remain - is this a calm situation ?!

On its website, the OSCE recalls that the mission in the east of Ukraine is aimed at monitoring the situation on the establishment of facts of the use of weapons by both parties, the recording of war crimes. The mission aims to achieve a multilateral dialogue to comply with the terms of the truce in the region.

I wonder what secret notepad the OSCE records in such data. After all, in fact, there was not a single articulate explanation about how the organization responded not only to the rocket attacks of Donetsk, but also the attack of the OSCE mission itself, which took place a few days ago. The shelling is under way, the “missionaries” themselves are firing at the vehicles, civilians continue to die in the Donbas, and in the OSCE they have collected water in their mouths. If this silence is the meaning of the work of the organization, then what is the point that the number of its representatives in the east of Ukraine will grow from 300 to 500 people? Or silence in 500 mouths weightier? ..

And the work of the OSCE in Ukraine is aptly characterized by the quotation of a wonderful football player and coach, a native of Kiev, Anatoly Byshovtsa, said, however, in a completely different way:

You have to be a complete idiot to believe everything that happens.

More precisely (about the OSCE mission) and you will not say ...