17 September 2014
122
Against the background of the continuing depreciation of the ruble against the dollar and the euro in Russia, more and more questions arise: is there a limit in the foreseeable future at which the ruble can stand still and breathe a little? At the time of preparation of the material, the value of the American currency has updated another record, reaching the value of 38 rubles. 70 cop., The value of the European currency almost came close to the March record value, having exceeded 50 rubles. At the same time, both currencies (dollar and euro) in just one day went up by 72 and 87 kopecks, respectively, bringing the cost of the so-called dual-currency basket to the highest mark - to 44 with more than a ruble. 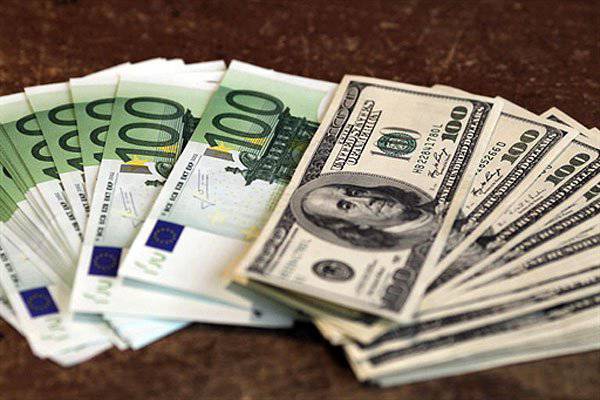 Of course, this situation does not give grounds for great optimism, since the level of import substitution, which is present in the domestic economy today, is very high. In other words, Russia is forced to import too large volumes of foreign goods, and buying them for dollars and euros (mostly), and this directly accelerates the level of inflation. And if the majority of Russians do not care much about the rates of foreign currencies due to the fact that we are accustomed to operating with the national currency, then unfortunately we will not succeed in ignoring inflation growth. If the government initially determined 4,8% as inflation targets, now even the forecast in 6% already looks very optimistic. This is despite the fact that acceleration of inflation in consumer prices is ahead of last year’s by about 1,5%.

If the Central Bank does not take corrective action, and does not support the national currency, the ruble can sink even deeper. At the same time, perhaps, no modern economist can “navangovat”, what is the exchange rate of the ruble against the dollar and the euro by the end of this year. Will the Central Bank provide financial support to the ruble? Today, this question worries absolutely all domestic economists.

By definition, the Central Bank of the Russian Federation seems to support the ruble. Why? Well, not so much because of the great love for the domestic currency as such, but because the Central Bank is guided by the said currency basket, within which the ruble exchange rate can move. If we consider that now the value of the dual-currency basket has reached its peak, then the Central Bank should at least stabilize the ruble, preventing it from falling further - beyond the limits of the basket. It can cost substantial funds. But substantial funds may cost the adoption of a new framework for the basket. And now the same state economists will have to consider the pros and cons: either to spend a lot of money in order to keep the ruble from falling and stall inflation growth, or not to spend so much money allowing you to fall more, but at the same time getting the risk of accelerating inflation to new lines.

It would seem that the first option is preferable. But this is only the external side of the question, rather aimed at the prestige of the Russian ruble. The central bank may well refuse to invest in support of at least the current ruble exchange rate. And there is a good reason for this. The fact is that even Western economists, who are not at all distinguished by respect for the Russian financial system, are inclined to say that the ruble is undervalued. Well, the ruble is not so weak that in a couple of weeks he himself (without outside help) could lose about 10% of his value. Hence, extraneous "help" is still present. The best price for the Russian ruble in the West is 35-36 per dollar and 46-47 per euro. And not only, by the way, in the West.

The current high price of US and European currencies against the ruble is a kind of speculative pressure that suits the Western system, acting under the dictation of the states “not interfering” in the economy. The US and the EU are trying to show with all their might: take a sip, they say, of our sanctions, and in addition, they clearly count on the Central Bank to panic and rush to “save” the ruble from falling, allocating billions in funds and depleting Russia's reserves.

In fact, it turns out that today it is the West that is significantly invested in the revaluation of its currencies, and on the basis of this, there is a struggle until the moment someone is afraid. If the Central Bank is the first to bend, then it will have to go to the financial support of the ruble and spend a lot of money to keep it within the existing bi-currency basket. If the Central Bank resists, then the US and the EU will either have to increase artificial pressure, spending new billions on it, or give up the pressure, which in itself will return the ruble to the adequate milestones indicated above.

They are trying to take our financial system to fright, while clearly relying on the discontent of the masses with the state of affairs. It is clear that to feel the growth of inflation on yourself - very few people may like it. But at the same time, it is necessary to understand that any spending by the Central Bank on supporting the ruble will only increase pressure from the Western economy, which now (and only now?) Is forcedly dancing to a political tune. The pressure will be increased in order to reduce the gold and foreign currency reserves (gold reserves) of the country to a minimum, and a decrease in the gold and foreign currency reserves can be a powerful blow to the entire economy. And this will directly affect each of us.

As soon as the Central Bank invests substantial funds to counteract the growth of the euro and the dollar, the next run-up will come from the West with the simultaneous understanding that the Central Bank of the Russian Federation has been dragged out. If, at first, the Central Bank of the Russian Federation shows that it does not intend to stick to the course, then the sanction-exchange rate pincers will unclench themselves - for the reason that it is not enough for the most risky financiers and even for the cane the system of Washington and Brussels economic policy.