12 September 2014
54
The new leadership of the space center (GKNPTs) them. Khrunicheva assesses his condition as critical, however, after 6 years, with the help of investments worth 56 billion rubles, he promised to turn the company into “the best manufacturer of launch vehicles and upper stages,” the newspaper said Look. 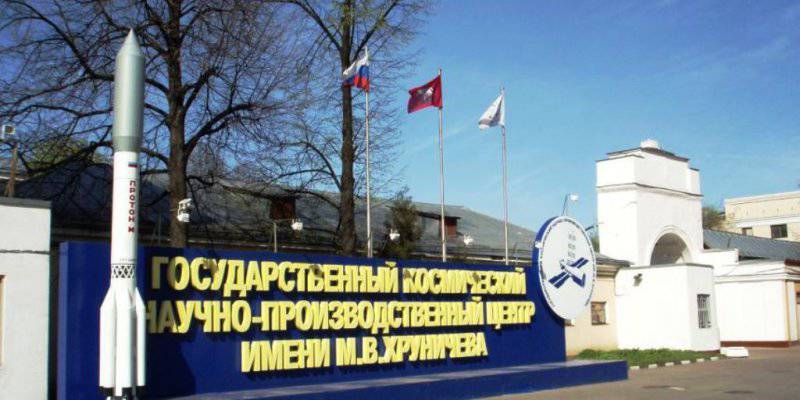 Yesterday, 11 of September, the new general director of the GKNPTs Andrei Kalinovsky presented to the supervisory board of the United Rocket Corporation (ORKK) a project of financial recovery of the enterprise. Led by Andrei Klepach, the board approved the program. In the coming days, the documents will be sent for approval to Roskosmos, and then to the government.

“The program will be adopted in less than a month, as the need for urgent funding is quite serious,” said the head of the SSCC, Igor Komarov, and added that “the situation is not simple, but not hopeless”.

“The accumulated losses from the operating activities of the center since 2007 have reached 11,9 billion rubles, and debts to suppliers - 14,7 billion rubles. The net profit margin forecast for this year is negative - minus 27%, enterprise productivity is 30% lower than in the industry, and the average salary is about 37 thousand rubles. In addition, the center load is no more than 40%, and the production itself is extremely non-rhythmic (up to 42 months with the 21 month per month), equipment depreciation reaches 60%, ”the data Kommersant.ru.

“Now we are starting to lose the market of commercial launches in America and Europe- complained Kalinowski. - The price of federal launches is growing. The task is to reduce the cost of launches if we want to stay on the market. ”.

In order to stabilize the work of the State Committee for Science and Technology, according to specialists, a total of 56,4 billion rubles will be required, most of which are planned to be received in parts as a loan from Vnesheconombank. The possibilities of attracting government subsidies and investments at their own expense are considered.

If everything goes according to plan, then by 2020, according to Kalinowski, the center should become “the world's best manufacturer of launch vehicles and boosters.”

It is assumed that with 2015, the company will begin to receive net profit, and with 2022, it will be possible to pay dividends. According to the general director, "the concentration of production at the sites in Moscow and in the territory of the Omsk association Polet will lead to an increase in labor productivity almost three times the 2018 year."

He also noted that “More than half of the areas of the Protons production plant in Moscow will be transferred to the state-owned banks by 2018 in the year, this will get rid of unused workshops, reduce costs and reinvest in production.”

In addition, the center will reduce the range of products and abandon small satellites and modules for the ISS.

“The total area of ​​the rocket and space enterprise in Moscow will decrease from 140,6 ha in 2014 to 52 ha in 2018, decreasing by 63%. At the same time, the production area will be reduced from 341,3 thousand to 123,1 thousand square meters. meters Salary will grow from 37 thousand to 78 thousand rubles, which will solve the personnel problem in the enterprise ”, - said the head of the GKNPTs.

The space center in recent years has often been criticized by Roscosmos for its unsatisfactory financial condition, as well as in connection with the accidents of rocket and space technology. In August of this year, Andrey Kalinovsky, who earlier headed Sukhoi Civil Aircraft, was appointed to the post of general director.
Ctrl Enter
Noticed oshЫbku Highlight text and press. Ctrl + Enter
Military Reviewin Yandex News
Military Reviewin Yandex Zen
54 comments
Ad