Offensive all over the rear

After the loud resignations of Anatoly Serdyukov and Evgenia Vasilyeva, enough time passed to deal with the activities of Oboronservis. However, the litigation with this society is still a burden on the Ministry of Defense. The structure created by the former head of the military department was not only cumbersome and ineffective, but also very resourceful in creating numerous intermediary firms and mechanisms for pumping out budget money. What lessons should be learned from this stories?

We emphasize right away: in general, outsourcing was the right decision. To free the army from unusual functions, to give servicemen the opportunity to do only combat training, and not chores, is logical and reasonable. But the embodiment of the plan was, to put it mildly, not the best.

What the check showed

Speaking at the collegium of the military department, Deputy Minister of Defense Ruslan Tsalikov cited several reasons that questioned the effectiveness of Oboronservis. Among them:

- a sharp increase in financial expenses, which increased annually by an average of 50 billion rubles;
-the lack of transparency of the activities of the companies included in the OJSC, and the absence of a real control system;
-low quality of services provided, especially in the cleaning system;
-the emergence of a huge number of intermediaries (up to five - eight in certain areas);
- growth of accounts payable: as of August 2014, it amounted to more than 90 billion rubles to counterparties, over a billion rubles in terms of wages.

Until now, the Ministry of Defense is forced to deal with confusing schemes, to sue, to challenge amounts from a billion rubles and above. In the courts there are several dozen cases.

The sluggishness of the divisions of OJSC Oboronservis coexisted with poor quality of work. It would seem that business involves efficiency. In fact, everything turned into a delay in the execution of orders. Suffice it to say that the actuation of completed work in some cases took up to two years from the moment of completion. 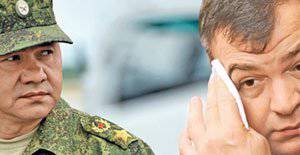 Obviously, it was impossible to tolerate such a mess. For more than a year, the Ministry of Defense puzzled over what to do with the monster. To wave a sword is reckless, unwise. In the structure of "Oboronservis" work many conscientious performers. Behind everyone - families, children. Therefore, to find a way out of the situation, the State Duma, the Accounts Chamber and the public were connected. Only at the beginning of June 2014 was born the consolidated position on the reform of Oboronservis.

The minister also expressed his opinion. “The system of providing services by third-party organizations has freed more than 65 thousands of servicemen and employees from performing non-core functions, however, outsourcing has not become a universal means of meeting the logistical requirements of the Russian army,” said Sergey Shoigu. “First of all, this is due to the poor quality of the services provided, dissatisfaction of the final consumer, a sharp increase in budget expenditures and the lack of transparency in the activities of the involved companies.”

Today, the final decision was made: by December 2014, the structure called Oboronservis will cease to exist. It is proposed to reform the holding by excluding from it the nine existing subholdings. And in the newly created structure, which will be called Open Society "Garrison", to include four subholdings that showed themselves from the best side. It:


It is assumed that a single subholding of construction and housing and communal services will be formed within the framework of the existing JSC Oboronstroy. And on the basis of the former 1470 logistics management, they will create a single center with transport and logistics complexes located in various military districts. The need for this was identified during inspections and in the course of large-scale exercises with the movement of large masses of people and technology over considerable distances.

To increase the effectiveness of JSC Garrison, the qualitative fulfillment of tasks in the interests of the Ministry of Defense, of course, a new effective management system is required. It has already been developed and includes uniform approaches to the disposal of the holding’s property, which, unfortunately, has not been observed before. Until now, many sub-holdings are not in the best economic situation, and some are in debt of tens of millions of rubles.

In part, this became possible because Oboronservis’s activities, its results and especially financial flows remained for a long time a secret behind seven seals. Everything that happened in the bowels of the holding was closed even for the leadership of the Armed Forces.

“Of course, this is wrong. Questions of state secrets - one. And there, where the economic activity is launched, is quite another, - emphasized Ruslan Tsalikov. “We believe that everything that concerns the work of such organizations should be clear, transparent and understandable.”

Now, a unified regulation of the holding’s trading and procurement activities will make it possible to avoid cases where the right hand does not know what the left hand is doing. It will help this and closer interaction with the bodies of the military administration of the districts. At the same time, the task of inventorying the repair enterprises of the Ministry of Defense and synchronizing their work plans in the new conditions with the defense-industrial complex organizations should be solved. These activities must be completed before the middle of the 2015 year.

Today, the basic principles of creating a subholding for the provision of communication services and telecommunications have been approved. Unfortunately, Voentelecom is notorious for confusing financial schemes, which definitely did not help improve the performance of the communication systems in the Armed Forces. But now the situation is changing dramatically in this area. 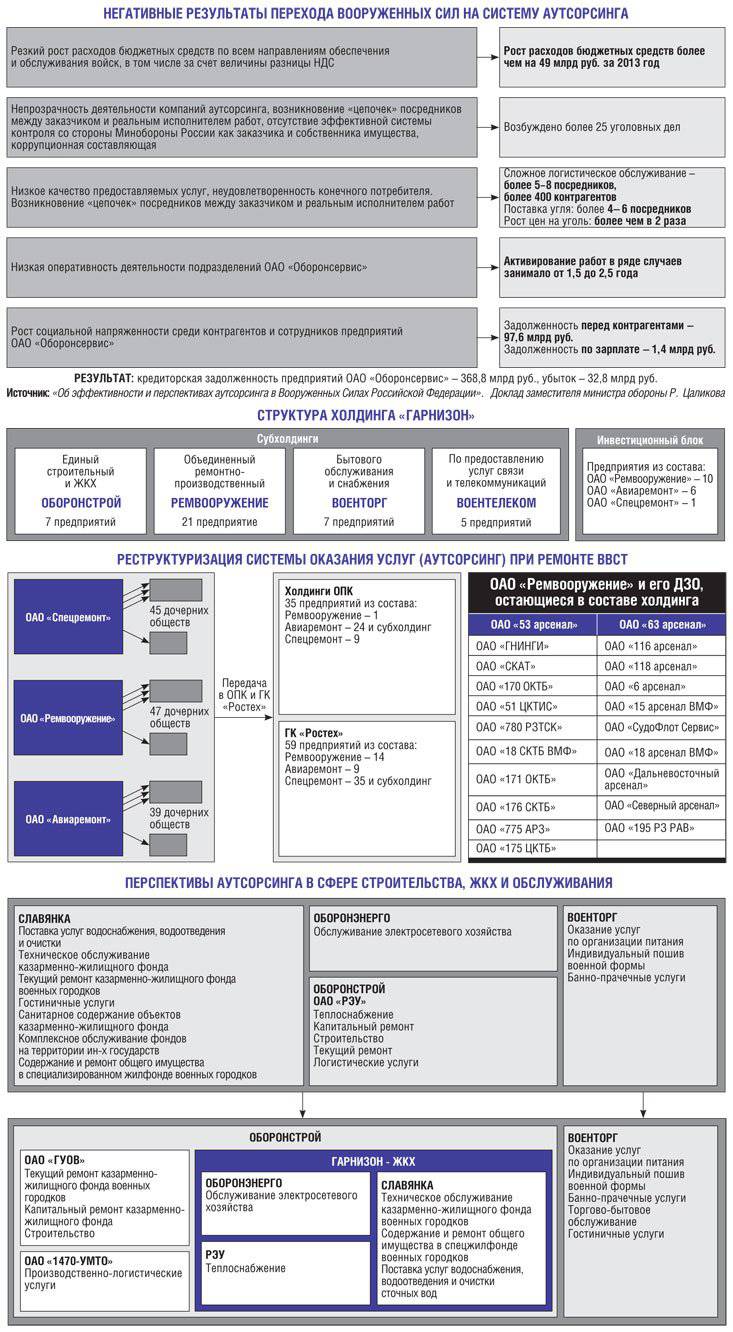 After the transfer of industrial and other units of Oboronservis (and this is a huge property complex), there is a threat that some of the facilities may be out of sight and efficiently loaded. In order not to repeat the previous mistakes, it has been proposed to create an investment unit that will examine in detail the problems of the property complex and submit proposals on the advisability of using it in the Armed Forces of the Russian Federation.

According to the Ministry of Defense, as a result of the reform of the outsourcing system, there will be a significant change in the volume and quality of services. The analysis showed that up to half of those that were supposed to be Oboronservis were not actually provided in certain areas, but were executed as completed. There were also those who did not provide services at all, but nevertheless try to get compensation from the RF Ministry of Defense through the court. Contracts with pseudo-suppliers will be terminated. Garrison OJSC will begin to carry out only those work that the army and the fleet, and most importantly - transparent.

Even today, the work to remedy the situation in this area, carried out by the Ministry of Defense in 2013 – 2014, has produced an amazing result: savings of as much as 22 billion rubles. In particular, at the expense of a reasonable contract policy in preparation for the winter, exclusion of middlemen, other measures. Managed to reduce energy prices (gas, electricity, coal). In other words, it is the result of people’s conscientious attitude towards their duties, honest work. It is easy to calculate how many new types of weapons and military equipment can be purchased for 22 billion rubles.

Of course, in carrying out the reform, a transitional period will be required, during which the Central Administration of the Ministry of Defense of the Russian Federation must ensure the effective fulfillment of administrative functions and prevent a decline in the quality of services.

The measures taken will also allow attracting major investors to the modernization of the existing housing and utilities system. The Defense Ministry has already spent a year searching for interested actors who could ensure the conversion of boiler houses to gas fuel. However, there is no success so far. Previously, problems were created by the clumsiness of the holding company Oboronservis. Now, in this area of ​​work, serious progress will be required, the study of market conditions, the selection of investors.

The economic contractual system should also become simpler, since it is more difficult to imagine more complicated than it was in Oboronservis (especially in financial support). It is enough to cite the following figure: debts within Oboronservis (accounts payable of enterprises) accumulated under 400 billion rubles and 60 percent of them are domestic, which were not there before. This is when one company needs another, and then someone else. Whole chains of debtors appeared, which the Defense Ministry is trying to cut today, which is not easy. After all, we are talking about hundreds of millions of rubles.

“We have been trying to understand these chains for a year, for example, connected with Oboronenergo, a number of other enterprises, their internal relations,” says Tsalikov. “And we come to the conclusion that many of them are artificially built.”

The most pressing issue is the increase in the prime cost of services to the Ministry of Defense in the sphere of housing and public utilities, repair of weapons, military and special equipment. The new structure of OJSC “Garrison” should streamline customer relations with suppliers as much as possible.

In addition, it is necessary to take measures to transfer the shares of Voentelecom OJSC, to restructure its debt. The still functioning Oboronservis jointly with the state corporation Rostec will have to ensure the maintenance of missiles and ammunition in the period before the launch of the arsenals of the integrated storage of the Ministry of Defense of Russia.

In the end, the military department will have to finally determine the scope of the use of outsourcing and the necessary volumes of services provided, to give up something. But in general, such a recovery will benefit the combat readiness of the Armed Forces of the Russian Federation.