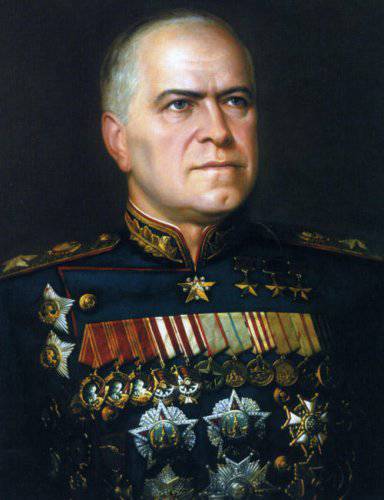 The great commander, it turns out, not only knew how to win, but also the shore soldier’s lives

Perhaps, for the first time in recent years, a book has been published, which claims to have a more or less thorough analysis of the combat activities of Marshal of the Soviet Union Georgy Zhukov. The author, historian Alexey Isaev, made a very extraordinary attempt to debunk the widespread myths about the “bloody victory” of the military commander on Khalkhin Gol, about his “non-participation” to the success at Stalingrad, about the Marshal’s desire to take Berlin first, for which hundreds of thousands of soldiers were laid on Seelow Heights, and some others. Moreover, the value of labor lies in the fact that it was written on the basis of previously unknown, classified, or very few documents studied. At the same time, a number of schemes are presented in the publication, of which the trainer's thoughts in a particular operation are clearly seen.

Why, in fact, what did the modern “Zhukovian” give? Authors often fall into two extremes. Georgy Konstantinovich either appears to be a complete martinet, left-to-right shooting commanders, driving whole armies into the “boilers”; or - by the unsurpassed “Marshal of Victory”, to whom other Soviet military leaders “are no good for candlestick”. Excerpts from the memoirs already published about Zhukov, archival materials, eyewitness accounts are compiled and lined up accordingly.

With the "prozukovsky" books, as they say, everything is clear. But Alexey Isaev speaks about “anti-Zhukovsky” in his work. In dozens of convincing examples, he shows that such authors often do not just stick out some facts while keeping silent about others, but also write simply untruths. Evidence went to the creators of memories. “This is precisely what is most striking in memoirists: ignorance of the facts and failing memory at every step with impenetrable aplomb,” Isaev notes. “Then these passages written with aplomb broke out of context and were used to slander Zhukov” ...

For many decades, there has been a myth about Zhukov as a commander, a “butcher,” who destroyed “for the sake of his own glory” hundreds of thousands of fighters. The main objective of the book “George Zhukov. The last argument of the king "- to change this strengthened even in an environment of kindly disposed towards the" Marshal of Victory "authors and just ordinary people opinion. On a documentary basis, Alexey Isaev shows how, starting from Khalkhin-Gol, “the requirement to take care of people will become unchanged from the first to the last orders of Georgy Konstantinovich.” In some chapters, the most interesting documents are cited in this plan, when Zhukov literally takes the chips off the commanders who made great losses. And this is done not in the spirit of “oh, you are so-and-so!” (Though not without it - but such was the leadership style in Stalin's time). The commander is told how it was necessary to act in order to avoid heavy damage, and how to carry out the combat mission in the future to minimize it. This was characteristic of Zhukov, both during positional battles near Moscow or Rzhev, and during strategic operations.

It was Georgy Zhukov who initiated the creation of special assault groups and detachments during the capture of enemy strongholds and demanded that their subordinate commanders use them. Motivation - "to avoid unnecessary losses."

The marshal himself made certain, seemingly large, sacrifices when it was obvious that if they were not made, then in the development of a particular operation one could either be defeated (for example, Khalkhin-Gola, where Zhukov “burned” a large number tanks), or it threatened much greater losses in the future. The case of allegedly head-on contrary to common sense attacks of the Zeelovsky heights in this context is written out in great detail in the book. It is proved to the point of pedantry that it was absolutely necessary to take these heights (and not bypass them).

“Difficult sections of the front inevitably meant great losses, which tend to project onto Zhukov, creating the image of a“ butcher, ”Alexey Isaev sums up his research. “In reality, the appointment of Georgy Konstantinovich to difficult areas of the front meant a reduction in losses due to his qualifications.” The author also recalls that it has previously been scientifically proven that on all fronts and in all operations commanded or directed by Zhukov, the losses were always as a percentage of the total number of troops than other generals (including Marshal Konstantin Rokossovsky, often expose "good antipode" Zhukov). Moreover, the difference was sometimes tens of percent.

From the documents, emphasizes Alexey Isaev, it is clearly visible that Zhukov knew how to fight. He achieved success by the forces that were at hand, sometimes collecting them bit by bit and concentrating on the right directions (this was the way 1941 was near Moscow in the autumn / winter). It is no coincidence, therefore, that from the year 1939 and from the first days of the war he was often thrown not only at the most responsible, but also at the most critical sectors of the fighting (in a modern way, the author calls the hero his “crisis manager” of the Red Army). And always from an almost inevitable catastrophe he did “non-defeat,” leveling the situation from chaos to a delicate balance.

Because of this, he did not have to become a commander who did not lose a single battle. So, in November 1942, by active actions in the Volga steppe, forcing Paulus to go on the defensive at Stalingrad, Zhukov - two days before the Soviet offensive, which ended with the entourage of Hitler's 6-th army, was sent under Rzhev - once again to help out the Western commander front of Konev. The latter, as a result of ineptly planned actions, was stuck in the development of Operation Mars. Zhukov managed to fix the matter here too. The laurels of the winners at Stalingrad were given to others (at one time Nikita Khrushchev tried on, say, Nikita Khrushchev) ... And there were many similar facts in Zhukov’s practice ...