President on the proposal of the Prime Minister disbanded "Rosoboronzakaz", "Rosoboronpostavku" and Ministry of Regional Development 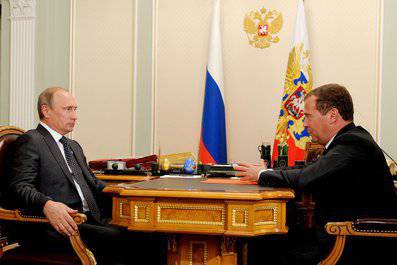 At the meeting of the President of the Russian Federation Vladimir Putin with the Chairman of the Russian Government, Dmitry Medvedev expressed the initiative to abolish several state institutions at once. First of all, it was proposed to abandon Rosoboronzakaz and Rosoboronpostavka, redistributing the functions of these departments between the Ministry of Defense, the Ministry of Industry, Federal Antimonopoly Service and the Accounts Chamber. RIA News reports that President Vladimir Putin has supported this initiative of Prime Minister Medvedev.

Another premier initiative was the proposal to disband the ministry of regional development, which, since October 2012, has been led by Igor Slyunyaev. The initiative Medvedev explained by the fact that the government has several overlapping work of each other departments: Ministry of Regional Development, Ministry of Eastern Development, the Ministry of Development of the Crimea, the North Caucasus.

ITAR-TASS publishes information that Vladimir Putin agreed with this proposal of Dmitry Medvedev.

Thus, the number of ministries in the government of the Russian Federation, as well as departments related to defense orders and supplies, is becoming smaller. According to the plan, this should lead to budget savings. Will the plan grow together with the harsh reality?