Alexander Nevzorov: "The militaristic waste of Russia is completely incomprehensible to me"

3 September 2014
158
In August 1958, a boy was born in the hero-city of Leningrad, who was named Sasha. Sasha was brought up in an incomplete family, having a grandfather “on the asset” - an employee of the Ministry of State Security. Sasha grew up to be an active and versatile boy: he sang in the church choir, then engaged in stunt activities.

Slava came to Sasha, who had turned into Alexander Glebovich Nevzorov by that time, in the late 80s, when he became a recognizable television journalist. "600 seconds", "Look", new and new projects. Sasha was a boy with patriotic notes in upbringing, and therefore, turning into Alexander Glebovich, he made a film about the heroism of the Lithuanian riot policemen, who did not back down from their oath at the moment when the collapse of the USSR occurred.

Filmed by Alexander Glebovich, as is well known, and films about the First Chechen campaign. He worked on stories on the Transnistrian conflict, the crisis in Nagorno-Karabakh. He came to the realization that he cannot be a simple journalist, but wants to try his hand at law-making. Apparently, the desire to try himself in big politics was manifested in Alexander Glebovich after close contacts with Boris Abramovich Berezovsky, who had as much a consultant.

Then somehow everything at Alexander Glebovich mixed up. Then he suddenly began to declare that the deputy’s work was not his, but nevertheless, with enviable persistence, continuing to run for deputy. That Mr. Nevzorov decided that he was an ardent atheist, although prior to this 4, he spent as a seminarian of the Moscow Seminary. His decision to become an implacable atheist was explained by the fact that the clergy of the Russian Orthodox Church literally through one are adherents of same-sex relationships and even pedophilia.

After this, the "confusion of feelings" Alexander Glebovich began to progress. Mr. Nevzorov suddenly became concerned with the problems of ... horses, having shot several films with a bias towards the existence of horse philosophy and harsh criticism of the exploitation of these animals in equestrian sports ... Against this background, Alexander Glebovich takes the path of guardians of "imperial" values ​​and even declares himself one of Vladimir's trusted representatives Putin (before the presidential election of 2012), as a man who, in the opinion, Nevzorov will be able to keep the “empire from falling apart”. The situation with the commitment to Orthodoxy being demonstrated by Vladimir Putin, apparently, did not particularly embarrass Alexander Glebovich ... 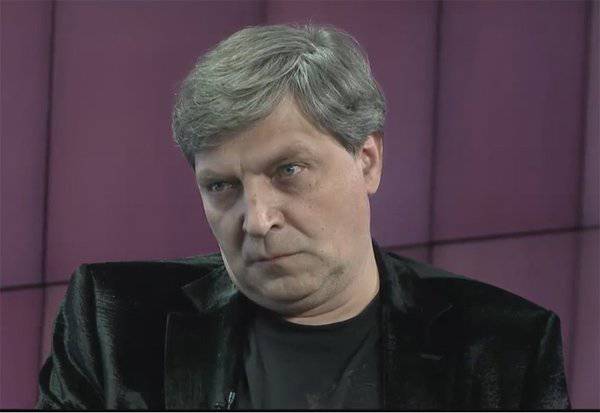 All these contradictions and mental agony allow Mr. Nevzorov to call the defenders of the White House (the government building in 1993), to which he himself belonged, “a possessed shobla”, “madmen”. And whether Alexander Glebovich’s memory became short, or if he had obvious problems with logical thinking, it’s not clear.

In short, Alexander-light Glebovich Nevzorov reached the point of protecting the very possibility of suicide as a form of ending a person’s life, and at the same time came to the idea of ​​the need to return the Crimea to Ukraine and the idea that the Donbass militia is hiding from Ukraine armies are terrorists, and the Ukrainian army, hitting from Gradov and artillery shells at schools and hospitals, is a victorious armada that must crush Russia's militarism.

Alexander Nevzorov. From the recent. Article "Chauvinistic hysteria of the Russian Federation" in the blog of the portal "New Time":

In fact, nothing happens in Russia. And this “nothing” is decorated with the most ridiculous, chauvinistic, silliest hysteria, because of which the country will later be painfully ashamed. (...)

Project Novorossiya slams like a casket. Sooner or later, all the cemeteries will be opened, all cellars will open and all statements about "depressed", stolen, raped will be collected. And all these heroes of Novorossia will get fragrant, salted, like their camouflage T-shirts, the status of international criminals. I think that Ukraine will look for them and find them everywhere, already within the framework of international law. (...)

For us, these sanctions will be expensive, because Russia is absolutely not independent in all matters. I'm not talking about culture, science, technology. (...)

Given that the militarist frenzy of Russia is also completely incomprehensible to me. I just repeatedly saw the Russian army in action, saw how it tragically lost the war to tiny Chechnya - from the strength of 3 – 5, thousands of desperate Chechens decided to confront the whole machine of the Russian army.

In order to “penetrate” in full, the article grown up in Alexander Glebovich Sasha must be read in full (link given above).

Now, if you were not aware that Mr. Nevzorov began to live a separate life from himself, then singing in the church and praying to all the saints, then drumming along the very fibers into militant atheism, then glorifying the Russian soldier, then wiping his feet about him it would be something Alexander Glebovich try to argue, criticize the course of his thoughts. But, as they say, the hand does not rise.

Is it possible to seriously criticize four times a member of the Duma, who himself admits that for all the years he attended the Duma 4 meetings, before that he more than actively urged citizens to vote for themselves ... Is it possible to seriously criticize a person who, apparently, cannot get out of the labyrinth his thoughts: then he helps Putin to preserve the “empire”, then he is already stigmatizing chauvinistic hysteria. And in general, it is strange to subject journalist criticism to a gentleman who rushes between the denunciations of priests and homosexuals and the simultaneous concern for the victory of the Ukrainian troops sent to the Donbass by a group of homosexuals from the Kiev authorities. Is it possible to judge a person who has the Crimea in his head, the crucified and resurrected horses (this is from the film of Mr. Nevzorov), the “joyful” euthanasia and thoughts about Berezovsky’s consultations ... No! It is impossible!