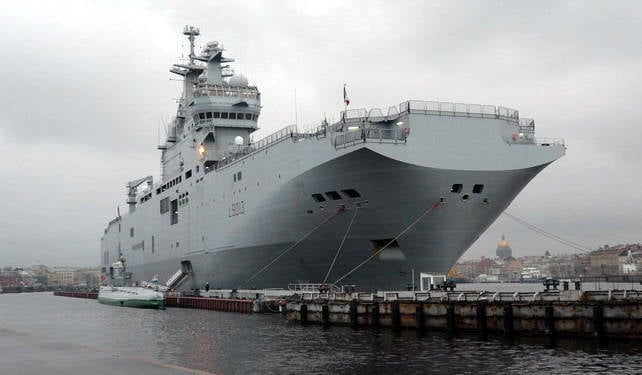 27 in June at The Brookings Institution held a presentation of a diploma of a graduate of Naval Postgraduate School (Monterey, California) Lieutenant Commander (Captain Third Rank) Patrick Baker (Patrick Baker), the subject of which was the analysis of the contract for the purchase of Mistral helicopter carriers in France. P.2 publishes an annotation to this interesting work; its text is also available in the public domain.

The paper discusses Russia's decision to acquire Mistral-class amphibious assault carriers from France. This acquisition marks a new period in stories The Russian Navy, which until then had hardly known the helicopter carriers. In the past, amphibious capabilities of the Russian Navy were provided mainly by tank-type ships, which lacked the ability to "attack beyond the horizon." These four ships of the Mistral type were for Russia the first major arms purchase abroad, since the Second World War.

The current agreement between France and the Russian Federation provides for the construction of two ships in France and two more at a Russian shipyard. Although as of May 2011 prices and individual contract terms were still under negotiation, it is most likely that this deal will eventually take place.

For Russia, it is more profitable to buy modern management and control systems for Mistrals, as well as French shipbuilding technologies, than to develop their own. And if everything depended on the capabilities of the Russian side, the negotiations would have ended long ago - in the interests of reducing the construction time. The Russians see the Mistral as a way to modernize their defense industry and the navy. At present, not a single Russian shipyard is able to repeat the assembly methods used by the French during the construction of the Mistral.

Russia made a choice in favor of Mistral even before it formulated the actual need for multi-purpose amphibious assault helicopter carriers. The attractiveness of Mistral for Moscow primarily consists in the technologies and methods of their construction; in addition, such ships play a crucial role in coastal amphibious operations.

The purchase of “Mistrals” opens up new horizons - this is the first major deal for the purchase of military equipment of the Russian Federation from the NATO country. The reaction to this event of some NATO countries, including the Baltic states and Poland, was naturally not very positive, since such an acquisition could significantly change the balance of power. The impossibility of the Baltic countries to shake France’s determination to sell Russian ships all the same convinced them that security concerns are diminishing in front of economic considerations — in this case, jobs for French shipbuilders. This deal also raised before NATO and France in particular the issue of adherence to the interests of their Baltic partners in the confrontation with Russia. In response to the clearly changing not in their favor strategic situation in the region, the Baltic countries turned to the Scandinavian countries with a desire to conclude defense agreements with them.

In a truly Gallic manner, Paris speaks of the illogicality of calling Russia its strategic partner, while refusing to sell weapons to it, urging not to exaggerate the opportunities that the new ships will bring to the Russian Federation. But the fact that France did not consult with its small NATO partners before selling, coupled with the obvious lack of concern about the legality of such a deal, left many in the Baltic region unhappy and worried. And this despite the new NATO strategic concept, presented at the Lisbon Summit in 2010, which marked the desire to assure member countries of the cohesion of the alliance in matters of collective security.

We are in Yandex Zen
Ship for all occasions
Military reform as an integral part of the security concept of the Russian Federation: Systematic dynamic assessment
5 comments
Information
Dear reader, to leave comments on the publication, you must to register.