From Islamist organizations to the CIA 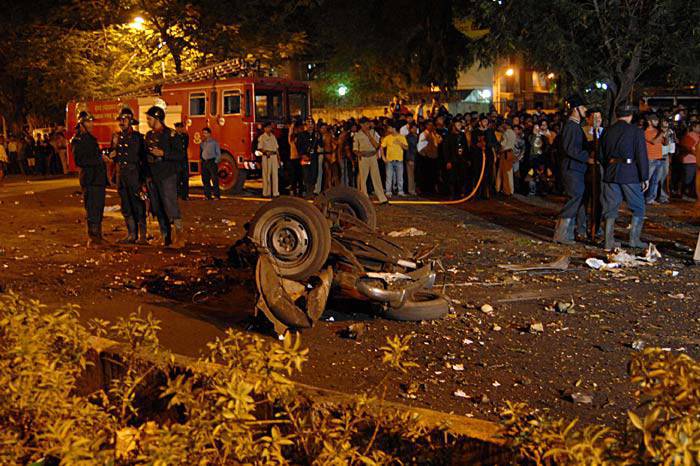 Regional security analysts believe that American intelligence services and Pakistan might have been involved in the terrorist attacks in India. For various reasons, both sides have an interest in destabilizing moods in the region. In addition, it is possible that the attack in Mumbai was the response of Islamist organizations to the actions of the Indian secret services.

Indian authorities will try to do everything possible to further attacks in India did not occur, made a statement Indian Prime Minister Manmohan Singh in Mumbai, where in mid-July (13 number) thundered three explosions that killed 18 people. And more 130-ti people were injured. “The one who did this should be found and punished as quickly as possible,” said the Prime Minister.

A day earlier in the metropolitan areas of India - Calcutta, Delhi and Mumbai - increased security measures. The police came to the attention of railway stations, cinemas, shopping centers, cafes and other crowded places. Indian Interior Minister Palaniappan Chidambaram said that, this time, the city of Mumbai was prepared for the terrorist attack much better than in 2008, when militants attacked hotels, the Jewish Center, the station and a restaurant and as a result 173 people died. However, the head of the Ministry of Internal Affairs admitted that this attack was a big surprise for the Indian secret services: "No intelligence has been received about the future attack." And the people of Mumbai are expressing their dissatisfaction with the fact that the authorities cannot provide security in the city.

So far, none of the Islamist organizations have claimed responsibility for the attack. The authorities do not want to disclose the results of the investigation, but, as always, it is possible that these bombings could involve terrorists from Pakistan, which is in the neighborhood of India. The validity of this hypothesis is almost unquestioned by the security consultant from Canada (Toronto) Sunil Ram. “At the moment there is very little information about the investigation into the attack. But, taking this into account, it is possible to assume that Pakistan may be involved in this terrorist act, or perhaps the CIA, as he put it in an interview with Expert Online. - Earlier this week, several days before the attack, members of the Indian Mujahideen group (paramilitary group) were detained. As the Indian secret services previously reported, the detainees were associated with the Pakistani Islamist organization Lashkar-e Taiba. Therefore, we can assume that this terrorist act in India could well have been a retaliatory strike by the Islamists. ”

Recall that according to the intelligence services of India, the Islamist organization "Lashkar-e Taiba" was related to the terrorist attack in Mumbai in November 2008 of the year. Then the Indian security forces destroyed the terrorists for two or three days. And then the only survivor, the participant in the attack of Pakistani Mohammed Ajmal Amir Kasab was sentenced to death. Already in the winter of India 2009, Pakistan handed over documents proving the involvement of Pakistanis in many terrorist attacks and the demand for decisive action. However, official Islamabad seems to have been busy with other more important issues. In any case, if we recall some data, already in the spring of 2010, the Supreme Court of Pakistan decided to release from custody the head of the Islamist group Lashkar-e Taiba Hafiz Mohammed Said, finding that evidence of his involvement in the attacks on Mumbai was not found.

The place and time were chosen exactly

“Why was this place and this time chosen for this terrorist attack? - argues with us a specialist in India, Ram. “After all, in a few weeks in the plans of the governments, the resumption of the previously interrupted Indo-Pakistani peace talks.” The Pakistani military has a very serious interest in having a “threat” in the form of India. After all, if a peace treaty is signed between Pakistan and India, then the Pakistani military will not be able to further justify requests for the allocation of huge budgets for their activities. In addition, they will not have an explanation of what dictated the need for full control over all the people of Pakistan. ”

Recall that the Indo-Pakistani peace talks were interrupted in 2008 year because of the terrorist attack in Mumbai. But in February 2011 of the year they finally decided to resume. The subject of negotiations is a set of problematic issues, including the most acute one: the territorial status of the state of Kashmir. In June, 2011 Indian Foreign Minister Nirupama Rao began a round of talks with his Pakistani counterpart Salman Bashir. And the visit of Pakistan Foreign Minister Salman Bashir to India in July 2011 was scheduled. Therefore, there is an assumption that the aggression of the July 13 terrorists was aimed precisely at disrupting this meeting.

The attack is definitely linked to Pakistan. But at the same time, as we noted earlier, there may be a connection with the CIA, especially if we take into account the current theater in the political ring that can be observed between the USA and Pakistan recently - did not rule out Sunil Ram.

As we have learned, the United States recently suspended military assistance to Islamabad. The rift between these countries appeared after the incident with the destruction of the leader of the Al-Qaida group, Osama bin Laden. Just remember that the US intelligence agencies conducted this special operation on Pakistani territory, without warning the Pakistani authorities. According to the newspaper The New York Times, the decoded mobile talks of Bin Laden's assistant suggest that Bin Laden himself had a connection with the extremist group Harakata al-Mujahadin, which was supported by Pakistani intelligence. That is why the security services of Pakistan have not noticed that the head of Al-Qaida has been in Pakistan for many years. Note that direct evidence that the Bin Laden was supported by the Pakistani special services were still not found.

However, in connection with these newly discovered facts, US Secretary of State Hillary Clinton said that she doubted the intentions of the Pakistani authorities to fight extremist organizations. And she warned that the US soon intends to reduce military aid to Pakistan. Note that since 2001, the United States has provided support to the Pakistani military in the amount of about 20 billion dollars, an average of about 2 billion dollars annually. Hillary Clinton also warned that until this Middle Eastern country takes measures to combat extremists, the United States will not provide financial assistance in the amount of 800 million dollars.

It can be assumed that US intelligence agencies have some interest in exacerbating the situation that is now brewing in the country so that it becomes clear that the Pakistani armed forces cannot cope with terrorist organizations at all, therefore it would be undesirable to stop providing them with monetary assistance. But we should not forget that Pakistan is a serious hope of the United States in the context of Afghanistan: the Pakistani authorities have contacts with the Taliban, and the United States, which is now withdrawing its troops from Afghanistan, hopes that Pakistan will be able to “force peace” Afghan radical organizations .
Ctrl Enter

We are in Yandex Zen
Delhi narrows its market for Moscow
1 comment
Information
Dear reader, to leave comments on the publication, you must to register.