Americans, all on the Maidan!

August 20 2014
83
"Maidan" in the American Ferguson does not subside. A state of emergency has been introduced, and additional “law enforcement officers” have been deployed to the town. Suppression of protests, tear gas - all this has become a common phenomenon. The other day, black Obama appealed to the black residents of Ferguson calling for peace, but that did not help either. Then the National Guard entered the game. It became finally clear that Obama prefers foreign Maidan. 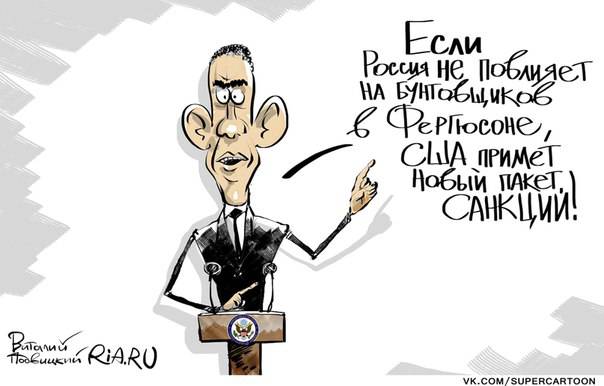 In the city of Ferguson, in the state of Missouri, 21 lives a thousand people, of which approximately 60% are negros. More than a week in the town there is a confrontation of residents with the so-called forces of law and order. The riot of the townspeople began after a policeman shot and killed 18-year-old unarmed black Michael Brown. Neither the state of emergency nor the night curfew prevented clashes.

President Obama urged residents to "calm and unity," but no one obeyed this call (rather strange, given that the protesters are just one). When dispersing protesters, the police repeatedly used democratic means: tear gas, smoke bombs. The crowd responded with bottles. The servants of the White House acted quite democratically and with the press: for example, there is information that the police arrested the photographer Getty Images in the town. Apparently, he did not shoot wrong.

Barack Obama at a special speech 18 August said that he understands the "emotions and anger" caused by the death of a teenager. Apparently, he really understood something, for he further informed that in the USA there is a "gulf of distrust" between local residents and the police.

Probably in order to widen this gulf, the Governor of Missouri, Jay Nixon, signed a decree on the deployment of units of the US National Guard in Ferguson.

Earlier, the captain of the road patrol service Ron Johnson (Negro), appointed by the state authorities responsible for maintaining law and order in the town, told citizens that forty FBI officers were investigating Brown’s death. He did not specify why so many of them are needed, but he told the Fergusons that the investigation would be fair.

Another ridiculous statement. So, it is implied that the EFBA members usually conduct investigations unfairly?

Of course, the townspeople did not believe the security commander. All these heavily armed policemen, including special forces, have long since not inspired confidence in Americans across the country.

Alexey Churikov in "Russian newspaper" He said that the reckless policy of the federal authorities in the United States led to the emergence in the country of police units equipped and armed "no worse than the elite American special forces of the army, keeping duty somewhere near Kabul."

It all started with the "anti-drug units", originating from the second term of Reagan. The implemented National Grant Program generously funds such units.

Today in the USA there are several hundreds of grant-eaters with regional or municipal status. The detachments receive grants from the federal budget, but do not actually report to the government, the correspondent notes. Local authorities have no right to control their budget: after all, it is replenished by the government.

“That is, the public of some American city sees that the local anti-drug squad has acquired several armored vehicles, a tank, two UAVs and the latest offensive army rifles. At the same time, the public understands that all these weapons, if necessary, will be used on the territory of the municipality, that is, against them. But neither citizens nor local authorities are able to seriously affect the current situation. ”

The journalist recalls that after the events of 11 September 2001, the United States was, in fact, at the mercy of the Department of Homeland Security. 2002 to 2011 The government has allocated 32 a billion dollars in grants for police development.

“Now, many police units are difficult to distinguish from regular troops, since they even changed the usual dark blue color of the uniform to military khaki. For example, video reports from the city of Ferguson, where law enforcement forces are now dispersing a peaceful demonstration, can be confused by an unprepared viewer with shots of a military operation somewhere in Somalia or in Iraq. ”

Besides, let us add from myself, it is unlikely that the dove of peace Obama undertook to support the democratic Maidan in his own country. Kiev is one thing, and Ferguson is another. Unlike Ukrainians in Kiev, blacks in Ferguson instead of cookies will get in the teeth.

Simple American people are not accustomed to thinking of such double standards. Yes, and the policy of suppression and murder he is clearly not to their liking. Protesting against the killing of a teenager, the inhabitants of the town thus protest against the American government.

The events in Ferguson are, in fact, something that will soon break apart the precarious building of American democracy brick by brick. Ferguson riots are just one of the manifestations of the negative processes that the United States of America threatens to destroy if not tomorrow, then the day after tomorrow.

Sociological research data tells us that the faith of US citizens in the ability of political elites to govern, as well as faith in a bright future, previously associated with the so-called. "American dream", faded away. Ahead, the Americans see a continuous darkness - and not a single gap.

The other day in the newspaper Washington Post released the sad survey data on the topic of the above-mentioned American dream. The publication reminded that the basis of this very dream is the belief of US citizens that a generation of children will live better than a generation of parents.

A public opinion poll in August 2014 was conducted jointly by NBC News and The Wall Street Journal. People in the streets were asked one question: are they sure that the generation of their children will live better than they lived? And here's the result: 76% answered that they have no corresponding confidence.

This kind of survey is not a sociological “novelty” at all, because it is being conducted since 2001. The publication reminds us that in the distant 2001 year, those who were confident in the American dream had accumulated as much as 49%. Not believing in the future, built on the basis of a dream, was that year 43 percent. August 2014 survey results were the worst for the whole period. history research!

The journalist received a comment from sociologist F. Young, who only confirmed the bitter pessimism of the conclusions of American citizens.

As the sociologist believes, universal pessimism in the United States has already gone beyond both financial well-being and races, regions, ages, genders, and political ideologies.

It becomes obvious that, along with the dream, people in the United States have lost faith in the government and in general in a just state.

14 August on the media company website "Rasmussen Reports" The results of the national telephone survey “Pulse Opinion Research, LLC” were published, during which something curious was found out. So curious that sociologists even made a special “note for President Obama and Congress” in their material - apparently, just in case, that the owner of the Oval Office and personalities like McCain understood them correctly.

What is there to understand? And so everything is clear, without notes and reservations.

If 43% of likely American voters believe that President Obama’s job is no more difficult than theirs, then 42% disagree with this statement.

As for the congressmen, their respondents generally recognized as parasites. The overwhelming majority of potential voters (76%) believe that US lawmakers are no more working than ordinary citizens. Moreover, 70% of respondents are confident that congressmen rest too long on vacation.

Today, only 19% of registered American voters state that most members of Congress deserve re-election. This is one of the lowest historical figures (corresponding surveys are conducted from 1992 onwards).

Such a low confidence in the congressmen will undoubtedly affect the congressional elections, which will be held in the US in the 2,5 month.

The massive distrust of Americans Obama and congressmen, along with accusations of the latter in parasitism, disappointment in the "American dream", the murder of an unarmed teenager in Ferguson and then the "cleansing" of the town by "guardians of order", operating with completely totalitarian methods, clearly demonstrate to the whole world what kind of democracy The United States came in the 21st century. Shoot everything that moves - this principle is armed not only with the American police, but also with the army. Well, who will think? Like who? Psaki