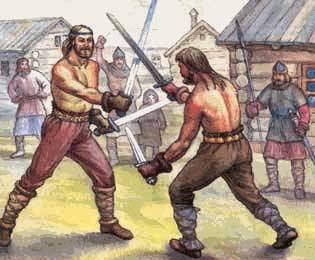 According to a number of sources - Arab, Persian, Byzantine - the warriors of the Rus, Slavs were in the pre-Christian period stories Rus-Russia is a thunderstorm for huge regions: from the most western parts of Europe to the southern countries lying beyond the Mediterranean and Black (then it was called the Russian) seas. So, in the 844 year, "pagans who are called ar-rus" broke into and sacked Seville in Arabic Spain. In 912, the fleet of Rus from 500 Rooks walked along the shores of the Caspian Sea with a firestorm.


What is known about the military techniques of the Rus of that time?

1.Russians, Slavs were excellent sailors, their flotillaThe fleets felt great both on the rivers and at sea. They were masters in the Caspian, Black, Varyazhsky (Baltic), North Seas, made campaigns in the Mediterranean Sea. Their ships - rooks (rooks) accommodated from 40 to 100 fighters in full armament and several horses, if necessary. Therefore, it is completely incomprehensible why, the history of the Russian fleet is carried on from Peter I. The Russian fleet is at least XNUMX years old. Moreover, the tradition did not interrupt - Russian earflaps, Cossacks completely repeated the routes of their ancestors. The use of lodges gave our ancestors great mobility, allowing them to deliver unexpected blows right in the heart of the enemy’s possessions and, if necessary, transport large groups of troops. Flotillas were supplemented by ground forces, which moved on land. 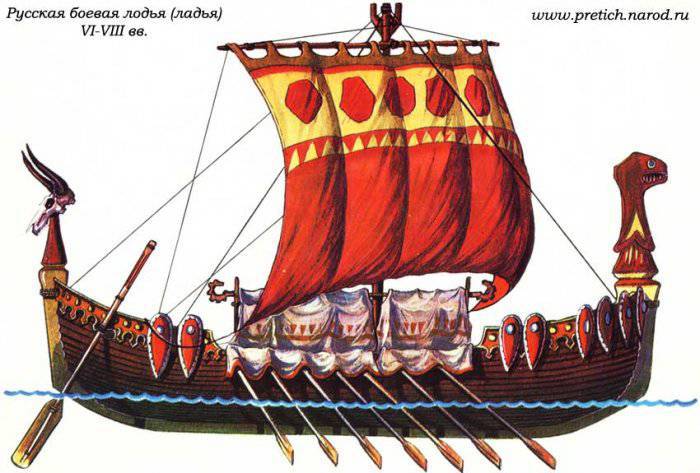 2. On the arms of the Slavic warriors were, according to the Romanian author Mauritius Stratega: bow with arrows (and the bows were complex, not simple, they had a long range — medium XFUMX “shooting” and piercing power — the same distance pierced the arrow 225-centimeter oak board; for comparison: modern athletes are aiming to beat 5 m; a record of medieval Western Europe was set by Henry VIII - about 90 meters; the average shot of an Asian shooter was equal to 220 meters); in archery almost from the cradle. Already in 150-8 years, or even earlier, the boy went and went with his father, the older brothers, to hunt. It can be concluded that the Rus were the best "archers" ("archers" called masters doing bows) of Eurasia of that time. In addition, the armament consisted of two spears - throwing (like a dart) and heavy for battle in the "wall"; “Difficult-to-bear” shield covering the entire body of the fighter from the legs; leather armor in the early period, then chain mail appeared; conical and semicircular helmets They all had knives - "zashozhniki" and long combat knives of the "akinakov" type. Part of the soldiers could fight with axes, maces, in the early period only the nobility and distinguished knights had swords.

3. Unlike the Scandinavians Russ, the Slavs knew and used equestrian combat. The heavily armed cavalry squads of the princes were a powerful striking force, which could make a change in battle, as in the Kulikovo battle. Their power was strengthened by the allied lightly armed detachments of nomadic tribes — the Pechenegs, Torks, and Berendeys; they were also called “black hoods” (according to the headdress). Do not think that Russia only fought with the tribes of the steppe, wise princes such as Svyatoslav, successfully used them in the fight against enemies. Frank enmity began only after the baptism of Russia - right up to the “crusades” of Vladimir Monomakh to the steppe.

4.Rusa used in the battle "wall", which were trained from childhood. “Wall to wall” fights are an echo of that practice. To understand what a “wall” is, we need to recall the images of the Spartan or Macedonian phalanx. All men of Russia were trained in this battle: the "wall", closing with "hardly tolerable" shields, bristling with spears, took the brunt of the enemy upon themselves, shooters were showered from the back rows of the enemy. The flanks and rear were covered by the heavy cavalry of the prince's retinue and detachments of the Allied steppe inhabitants. The "wall" withstood the blow, and then began step by step to oppose the enemy, the cavalry struck from the flanks, completing the rout of the enemy.

5.Ruses and Slavs were considered experts in the so-called. "Guerrilla war" - ambush attacks, various sabotage. Thus, in the Byzantine sources there is a case when a Slavic intelligence officer from the army of Belisarius (commander of the emperor Justinian), penetrated the enemy camp and stole one of the leaders ready, delivering him to Belisarius. In fact, this is the first mention of the so-called. "Plastunov", military intelligence of Russia-Russia of that time.

6. Judging by everything, our ancestors owned and the basics of the so-called. "Combat trance", combat psycho. Cases are described where they engaged in “divine nudity,” or only in bloomers. In the North of Europe, such warriors were called “berserks” (in a “bear shirt”), and the myths about volkolaks were not born from scratch. We are talking about combat trance, when a warrior “transforms” into a wolf, a bear, and without feeling fear, pain, dramatically increases the limits of the capabilities of the human body. The enemy, faced with such warriors, feels mystical horror, panic, loses morale. Zaporozhye Cossacks of such warriors were called "character traits." There was also a collective psychotechnique: the warriors of the Rus and Slavs were direct descendants of the “gods”, therefore they had no equal in battle. It can be said that this military tradition is very tenacious: Suvorov turned his soldiers into "miracle heroes" who can do almost anything. We can also mention the principle of the Airborne Forces - “Nobody but us.”

7.Ruses, Slavs were the best masters of hand-to-hand combat, unfortunately Christianization, the prohibitions of kings, emperors almost broke the traditions of mass fighting culture of the Rus. But now intensive searches and a gradual reconstruction of many types of Russian hand-to-hand combat are underway. 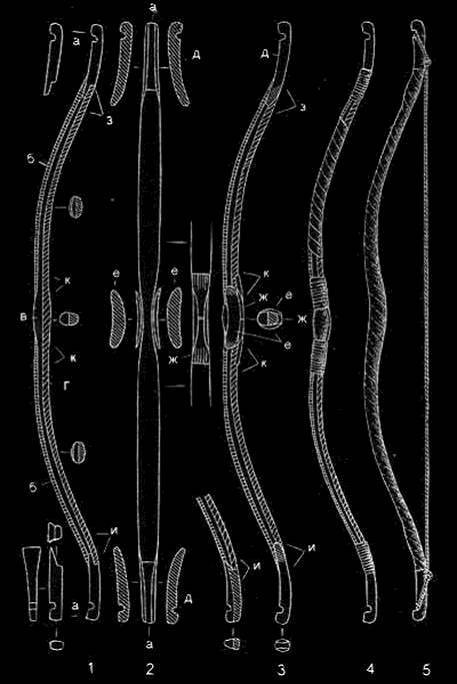 and - the ends with cut for a bowstring

and - knot or junction of the ends, slats and tendons

2) view of the wooden base of the bow from the inside and the layout of the bone linings:

d - trailer covers with cut for a bowstring

e - side pads of the handle

W - lower handles on the inside of the bow

3) arrangement of bone overlays on the bow (side view):

and - the junction at the ends of the bow

to - the place of connection at the handle of the bow

5) onions with bowstring after pasting

We are in Yandex Zen
Secrets of Russian history: Azov-Black Sea Russia and Varangian Russia. Part of 2
10 comments
Information
Dear reader, to leave comments on the publication, you must to register.