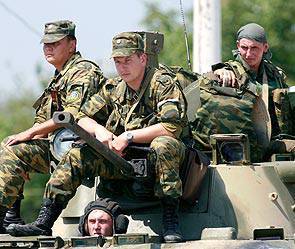 In the military, they developed a new uniform for wearing at high temperatures: the soldiers would look like boy scouts.


As Life News was told in the Ministry of Defense, the set includes 5 items - special berets "with holes", T-shirt, Panama, shorts and a baseball cap.

According to the order of the commander of the unit, they will dress in this form if he decides that it is too hot on a street for a typical summer uniform, the military said.

The Ministry of Defense of the Russian Federation reported that the lowest air temperature for this form is 20 degrees Celsius, but the uniform will be changed for 30 and higher servicemen.

Last year there were several accidents, when the soldiers fainted from the heat, and this pushed the military to develop a lightweight form.

At the moment, the first sets have already entered military units, which are located in the southern regions of Russia and other countries where our armed forces are located - in the Astrakhan region, Armenia, Kyrgyzstan, and Chad.

Uniforms for these countries sand color. But for other regions, the colors may be different - dark green, camouflage, black and any other, depending on the wishes of the command.

Recall that all recruits during the autumn draft were provided with new uniforms. And during 2011, it is planned to change all soldiers and sergeants of military service into military uniform, the military department said.

Nearly a quarter of a million citizens called up for military service in the fall and winter of the 2010 of the year received uniforms at the assembly points and in military units. The same will happen in the following appeals. Thus, by the end of 2011, it is planned to provide all conscripts with a new military uniform.

It will take more time to completely change the military wardrobe of the officer corps. “Today, mainly graduates of higher educational institutions receive a new officer uniform. The rest of the officers are given new-form kits gradually as the old uniforms wear out, ”said the source.

A source in the Ministry of Defense also said that “military clothing was taken as the basis forhistorical colors of outerwear, colored pockets of caps and field shoulder straps, but taking into account modern design solutions of fashion designers. ” According to him, the main differences between the old and the new form of clothing are in the details. So, shirts and tunics will no longer have patch pockets. The caps will not look bulky, as the tulles are made two centimeters lower. And from the hats removed double-headed eagles. Now, as before, the armed forces of the Armed Forces again began to differ in the color of decorative elements - caps of caps, edgings, gaps on shoulder straps, stripes.

The scandal that flared up not long ago in connection with the complaints of the soldiers' mothers (the recruits allegedly had caught a cold and became ill in Yudashkin’s form), the source did not mention.

Ctrl Enter
Noticed oshЫbku Highlight text and press. Ctrl + Enter
We are
The military began to receive a new field uniform
12 comments
Information
Dear reader, to leave comments on the publication, you must to register.