As A. Hitler did the leader of the German nation 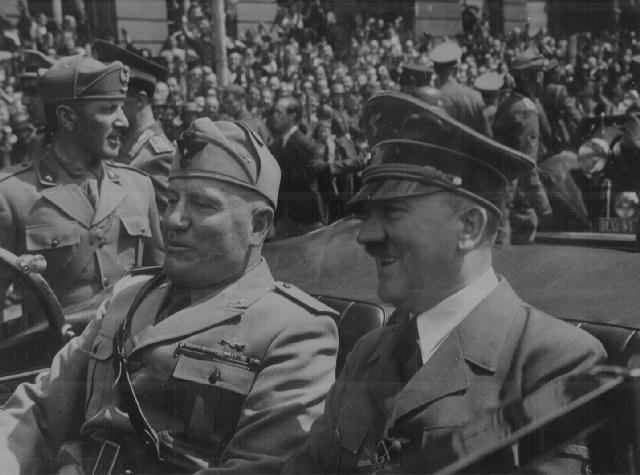 Already 20 in November 1922, the assistant of the American military attache in Germany, Captain Truman Smith, met with a man whom the world did not know yet - with Adolf Hitler. Following the meeting, the captain compiled an analytical report in which it was said that dictatorship would be the best way out for Germany and the United States with England. Only she can prepare Germany for a fight with Marxism.


Hitler was then one of the leaders of a small party of several thousand people. Such parties, organizations, movements in those years, there were hundreds. It would seem to whom he was interested in the United States? There then ruled President Warren Harding, famous for the mass of scandals. Behind him stood the Doherty gang, the Ohio magnates, the antitrust restrictions were lifted, and the famous Prohibition Act was carried out by Justice Minister G. Doherty, which became a blessing for mafia structures. The US Navy’s fuel reserves, a veteran relief fund, and a foreigners ’property fund were plundered. It all ended with the fact that Harding died suddenly or helped him die. Behind him, also suddenly, witnesses of his death - his wife and doctor died. 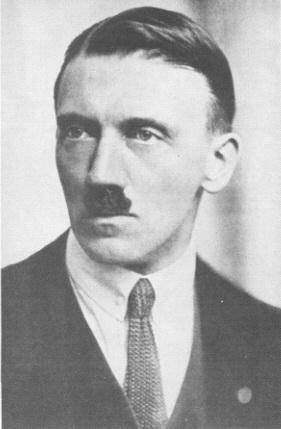 Under the new President Coolidge and his successor, Hoover, power somewhat restored its authority. But the big American “business” has already become popular, American corporations have had few of their citizens, Latin American countries, their order should have spread to the entire planet, and for this they needed control over Europe and the USSR-Russia. And the USSR gradually left other scenarios, began to pursue its course. Yes, and changes were needed to finally undermine the power of the old "control centers" - London and Paris. That is why Otto Kahn began to finance the regime of Mussolini.

Thus, American business helped to ensure that the German industry did not die in the post-war crisis, retained its potential. In August, 1924, at the London Conference, Washington and London insisted that the reparations regime be relaxed, as it destabilizes the German economy and leads to an increase in revolutionary danger. The Dawes Plan was adopted, which softened the repayment repayment schemes, providing large loans to Germany for their repayment. In this regard, the largest financial tycoons of the States — Morgan, Kan, Baruch, Rockefellers, and others — took part. For these financial operations, International Accepts Bank was created, Paul Warburg became its chairman, and his main partner in Germany, Max Warburg, who during this period of time entered the board of the Reichsbank. The Americans not only received interest from this, but also successfully introduced themselves into the German economy. Then, for the aid of Germany and the further introduction of American capital into the country, Jung's plan was adopted.

In 1929, a crisis was arranged in the United States, and the pyramid of the “equal opportunity society” collapsed. The government further aggravated the situation by refusing federal assistance to the population, although the administration used subsidies to support large companies. This crisis has spread to other countries. Especially hard hit was Germany, already strongly associated with the States. In Germany, the number of unemployed in the year 1931 reached 3 million, by the spring of the year 1932 was up to 6,5 million.

The crisis, organized by the American oligarchs, further strengthened their positions and helped them to bring their protege, F. Roosevelt to power, he was among Wilson's associates, and Baruch and Colonel House, the “gray cardinal”, became the “directors” of his election campaign in 1933. President W. Wilson. Roosevelt was presented, as at the time of Wilson, the defender of the "little man", as opposed to the oligarchy. True, House soon died, but Baruch became the main economic adviser, and in addition, Paul Warburg's son, James Paul Warburg, joined Roosevelt's “brain trust”. His team included other figures from the "Wilson team" - U. Bullet, U. Lippman, D. Grew, DF Dulles, Allen Dulles. Even his “New Deal” is reminiscent of Wilson’s program, New Freedom.

In the United States, a real revolution was carried out: all banks were closed “for holidays”, the Fed’s powers were expanded, gold and silver were forcibly withdrawn from the population, which were exchanged for devalued dollars, planning was introduced and something like an economic dictatorship. As a result, the United States was simply robbed - both ordinary people and smaller competitors of the “big sharks”. Not many have understood this, for example, Congressman Louis Mack Fedden stated the following: “The world banking system is being established in the United States.” All monetary and credit resources are controlled by banks D. Morgan and Kun-Loeb. He tried to press charges against them, assessing that only the state had been robbed of 80 billion dollars. But after two failed attempts he died after a banquet. As a result, the American "financial international" put under the full control of finance, the US economy and everything else. 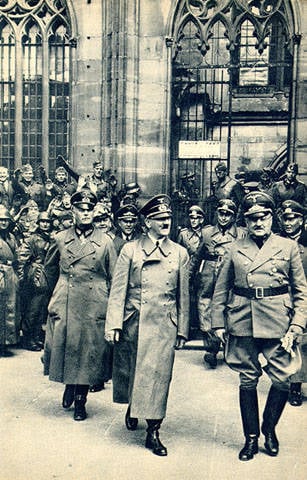 Cooperation oligarchies of the United States and Germany

Back in September, 1923, Houghton, the US ambassador to Germany, visited the German “king” of coal and steel, Stinnes, his words are interesting: “... We must find a dictator and give him the necessary power. This person should speak the language understandable to the people, and such person already exists ... ". And further: “The president will appoint a dictator who will put an end to the parliamentary regime. With the Communists ruthlessly dealt, and order will prevail in Germany. Then the United States will be able to safely invest in German industry. ” After 10 years, this script is implemented. Already with 1923, Hitler begins to finance from abroad, this will be one of the main factors of his ascent.

One of the middlemen between Hitler and the US financial oligarchy was Yalmar Schacht. Father Ya.Shahta was a US citizen, an entrepreneur. Interestingly, he was co-owner of the 35-storey skyscraper in New York, at: Broadway Str., 120. This is the address where the club of bankers was located, the offices of V. Sverdlov, Sydney Reilly, Otto Kahn and a number of other firms, activists who participated in the organization of the February revolution in Russia, its looting. Another financial guardian of Hitler was Wilhelm Köppler, who owned half of Odin-Verke’s shares, and the second half of shares belonged to the American company Eastman-Kodak. Since 1931, Köppler is A. Hitler's chief economic adviser. His other financial assistant, Kurt von Schroeder, is a representative of the international financial family. The shredders were related to the clans of Mallinkrodt, Bischoff, Kleinworth, who in turn had connections with the Morgans, the Rockefellers. Kurt von Schroeder himself was the son-in-law of Richard Schnitzler, the owner of the IG Farbenindustry Chemical Corporation, and this concern was associated with Standard Oil (the Rockefellers).

The party of Hitler, step by step, expanded its position in the democratic elections, and this is big money. Many German firms were connected to his ascent. In 1927, at the request of the coal “king” Kirdorf for the business world, Hitler wrote a brochure entitled “Paths to Revival”. The money was “washed” in the party “mutual aid checkout” (answered by Hess and Bormann), but officially it was intended to help attack aircraft.

The British were also sponsors, for example, oil tycoon Deterding, the “newspaper king” Lord Rotermere. The same Ruhr industrialists who supported the Nazi party were associated with the “Economic League of England”. The Austrian Rothschilds participated in the financing of the Nazis.

From 1930, German industrialists put pressure on President Hindenburg and Prime Minister Brüning to give power to the Nazis. 19 November 1932, the German industrial and banking circles already demand that Hitler be given power. As a result, on January 4, 1933, a meeting between Hitler and ex-Chancellor von Papen took place at Schröder’s Villa, where agreement was reached on the specific conditions for the transfer of power. 28 January 1933 was an old Hindenburg under pressure from von Papen, dismissed the government of Schleicher, Hitler was appointed chancellor.

Schacht, after winning the election, became head of the Reichsbank. The financial situation of Germany was not so hot - foreign debts of almost 19 billion marks, together with investments - 23,3 billion marks. Schacht goes to the USA and convinces everyone that there is no more democratic government than the government of A. Hitler, as a result he receives new loans. In the same year in London, Schacht earns almost a billion pounds. In addition, he seeks a reduction, and then a general cessation of payments on old loans. 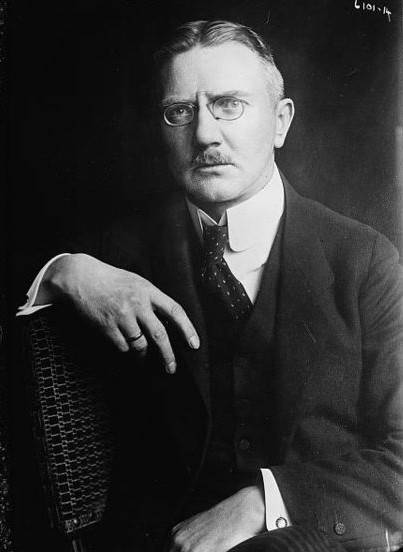 The active cooperation of American corporations with German ones in terms of the militarization of Germany begins. Schacht, Rosenberg and Huguenberg drafted and submitted a memorandum in London in which they argued that only Germany could save Europe from the “danger of Bolshevism”, therefore it should be allowed and helped to arm itself.

Hitler was originally a puppet, which was used for "reformatting Europe", hitting Russia and not with the aim of the German "New World Order", but to establish the American "World Order". 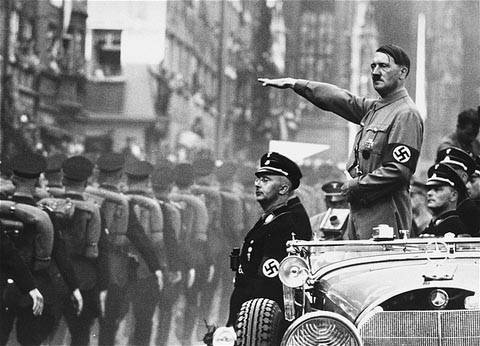 We are in Yandex Zen
Diplomats of the People's Commissariat of Defense: on the eve and during the war
The failure of the "Hoffmann Plan" - the forerunner of the plan "Barbarossa"
5 comments
Information
Dear reader, to leave comments on the publication, you must to register.