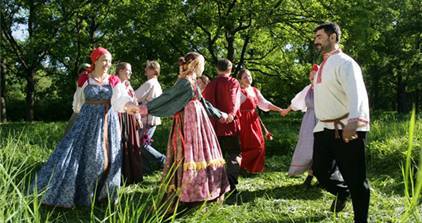 “Your customs, your laziness, your fights, your arrogance are repugnant to me,” says a colleague’s son, an 22-year-old student who has returned from 5 years of studying in the US, who is now preparing the documents to leave, “You don’t know how to work, but you know how to envy, you have no business vein, in fact you are all slaves, and you complain about the boss who clamps you.


You are inhospitable, walk with gloomy mugs, never smile, and by sight it is clear that you will not interrogate snow in winter. If you are not nakhamili in the store, on the street, in transport, then consider that the day went well.
I hate how you decorate the home - ugly chipboard furniture, ugly elephants, ugly pissing boys, ugly carpets on the walls. And no individuality. You walk on familiar and can not even understand who has just been.

You are all poor and complain about the rich and hate them, but still you dream of becoming one. Moreover, the rich - this is another song. In America, the rich horseradish distinguish from the poor. Man can not wear sneakers for zapadlo 30 bucks here every wealthy in the worst traditions of the Negro from Harlem, who published a platinum disc, weight wrong bryulikami, buying an expensive car, puts on the claw gold Rolex and shit on others. In the USA, I had many rich friends about whom I knew that if not themselves, then their parents got their loot honest. Who had startups who started their own business. If you have at least a million bucks, then you must be a thief, a bribe taker, or the rarest bitch with whom you have to greet you by the hand. I have not seen a single rich man who would not show off money.

Your officials are all thieves and extortionists; without a bribe, it is impossible to receive a single piece of paper. I had to change my passport, so the aunt in the passport office looked me in with her eyes, and hinted at something, and when I did not understand, she wrote me a list of the required papers coming from Tsar Pea, that it all became clear.
Your art is all some kind of shit imitating the West. I almost died of shame when I came for a vacation with a friend, an American, three years ago, and from all the holes and cracks some kind of dull rubbish rushed in burry English, and it turned out to be a group of two homosexuals who, in addition, are popular. There is not even one original series, everything is licked off one way or another from the US, and not from the very best. I was very ashamed. I was screaming at a comrade about the great Russian culture, but you have nothing of your own, you recognize Americanism in everything, and not the best examples. By the way, the original culture, some kind of folk art, you are all ashamed. In the west, no one is ashamed of country music, it has its own huge niche, and many country musicians are more popular than pop performers, you all blush at the mention of the balalaika, and some sad old fart listen to folk music.

Your women -... love, do not respect themselves. For example, Tom, the guy I brought, the 20-year-old girl I introduced him to, gave on the first date, and all the two weeks that we were here, hinted that he would take her to America. The same success was with other girls in the department of linguistics, where we went to prepare reports. It was worth saying that he was American, the girls melted and began to run after us.

All that you have, you zasrat and crap. It is necessary to go out into nature, into the forest, to see that everything is inundated with govnische and bottles. You have no future, and I am glad that I will leave here. "

Here is an opinion.

The answer to this opinion on one of the sites:

As a person who has lived and studied in the USA for a while, I can say the same about America !!! That's really who exactly has no future. so it is in the United States .... I regret terribly that I gave this worthless country 2 my year of life, but now I am firmly convinced that America has no future !!! This country will fall apart through 15-20 years into a bunch of miserable third world states ... education in the USA, for which I went there and actually went - just none !!! What have we forgotten there: derBmokratia? Their whole democracy rests solely on green pieces of paper, which they call money, and military power, which they demonstrate to the whole world ... the US authority in the world community is zero (I mean sensible people), there is no culture at all, as far as "weed" is concerned, in New York, even litter is on Fifth Avenue, and Harlem and the Bronx are just one big dustbin ... the same thing in all major cities. As for dissolute girls, this amerikos simply didn’t meet with those girls, not everyone is torn in the US, believe me, but American schoolgirls are ready to sleep with the first person they meet, and the furniture is very personal in Russia too))), I declare as a twice-graduated designer ...

In the continuation of the topic, it painfully touched the living: our people are sincere, and if everything in their life is bad, they will not smile at you on the street, but the Americans are smiling right and left, openly hating everyone and everything - everyone its, as they say ... yes, we are not perfect, Russia is drinking altogether, mothers, is conducted on all that vomit propagating in the media the "American" way of life and the "American dream", but we, the Orthodox, have a future, at least because we believe in God, and they only go to church and sitting on a prayer, eat their popcorn, write down waving a cola and not taking off the headphones ... this is such a "culture" ... and a gun is dragged into the school and fired at the teacher if he gives the wrong grade ... I don’t need such a democracy !!! The dream of American schoolgirls is to cram more silicone into boobs ... it would be better to buy new brains for yourself. And finally - ALL my friends, who left for the United States to work or study, have returned to Russia, because they DO NOT WISH to work for their enemies and because they HAVE A MOTHERLAND. Let it be with flaws for now, but ONLY and FAVORITE !!! ps all psychics and soothsayers assert that the revival of spirituality will begin with Russia, that's it !!

We are in Yandex Zen
Dmitry Puchkov: You can’t defeat someone’s propaganda - organize and lead your own.
What you didn't want to know about England
40 comments
Information
Dear reader, to leave comments on the publication, you must to register.