In the post-Soviet space, they rewrite the history of the Great Patriotic War 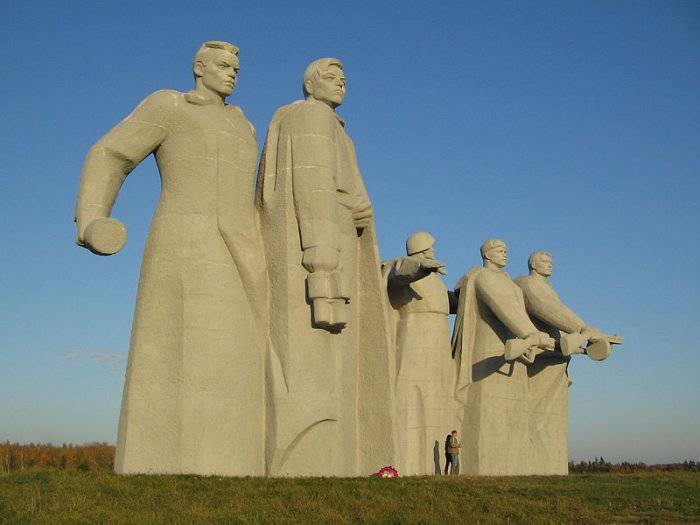 It took only a couple of decades after the collapse of the USSR, and history The Great Patriotic War is being rewritten not only in the USA and Western Europe, but also in the former republics of the Soviet Union. For the sake of the pro-Western political elites and local Nazis, historical facts are turned upside down.


So, in Moldovawhich during the war years was occupied by Romania and then many Moldovans fought in the ranks of the Romanian army on the side of the Third Reich, when others remained loyal to the Soviet Union and fought for it, they no longer study “History of Moldova” in schools, but “History of Romania”, which states that the Romanian army together with the Wehrmacht "liberated" Bessarabia, the north of Bukovina and the Hertz region, which were "occupied" by Soviet troops. Moldova is identified with Romania, which lost the war.

In addition, Moldova even calculated the damage from the "Soviet occupation" - 27,8 billion dollars. Russia is accused of the destruction and deportation of Moldovans in the period before, during and after the Great Patriotic War. According to the historian Vyacheslav Stevile, who was a member of the state commission for the study and evaluation of the totalitarian communist regime in Moldova, this amount includes: the prewar deportation of 72 thousand "unreliable elements" - by 6,23 billion dollars; death "on the first line" (that is, on the front line) 55 thousand Moldovans - 5,9 billion dollars; death by starvation in 1946-1947 174 thousand Moldovans - on 15,72 billion dollars. In this regard, Moldova does not lag behind the Lithuanian and Latvian Seimas, which have filed claims on the Russian Federation with 23 and 18,5 billion dollars, respectively.

Especially Russophobia and anti-Sovietism flourished in Moldova under President Michael (Michael) Ghimpu, leader of the Liberal Party. He proclaimed himself "Romanian", refused to go to 65 anniversary of the victory in Moscow, with him one of the streets in the suburbs of the Moldavian capital Chisinau received the name of Hitler Germany's ally, the Romanian dictator Ion Antonescu.

In Georgia also rewrote history and continue its "format." The Georgian people made a great contribution to the victory - hundreds of thousands of Georgians fought against the Nazis, about 300 thousand of them laid down their heads, Kantaria was one of the fighters who planted the Victory Banner over the Reichstag. Even before M. Saakashvili, the 9 holiday of May was canceled, made it a working day. Saakashvili ordered to blow up the memorial in memory of the dead Soviet soldiers, including Georgians, in Kutaisi.

The Georgian textbooks state that the non-aggression pact between the USSR and Germany “unleashed Germany’s hands”, that the CCC also thanks to him the opportunity to realize its “aggressive plans”. At that time Georgia was a “conquered country”, “it was Russia that deprived Georgians of state independence, and Georgia turned out to be forcibly united in the Soviet Union. And now she had to fight in the interests of the Soviet empire that had won her, sacrifice her life for her, giving away her intellectual and material resources, ”the authors report. Preparations are under way for the announcement by the 30-40 heroes of thousands of Georgians who were supporters of the Nazis.

In the Baltic countries: in Lithuania, which gained a third of the territory (including Vilnius and Klaipeda), thanks to the USSR and personally Stalin, they equated Soviet symbolism with Hitler and Nazi. According to Lithuanian textbooks, the Lithuanians met the news of the beginning of the war “with joy”, because they saw in it salvation from the “Soviet terror”. There are no reports of Lithuanian partisans who killed traitors serving in German institutions or in self-governing bodies. They do not recall the Lithuanians who fought on the Soviet side. It creates the image of the victim country of the two occupation regimes - the Soviet and Hitler. At the same time, they do not recall the Lithuanian punitive battalions that participated in punitive operations against the Belarusian partisans, in the extermination of the Jews.

In Latvia, the “glorification” of the Nazi collaborators is even more outspoken - the Nazi shortages, the veterans of the 15 legionnaires and the 19s of the Latvian SS divisions became real “heroes”. With the support of the US embassy, ​​a “work” “History of Latvia: The Twentieth Century” was published, containing many interesting opinions. Thus, the concentration camp in Salaspils, where thousands of people were killed before 100, is called "corrective labor", and it allegedly contained: "criminals, deserters, vagrants, Jews and others." Latvia is the “victim” of two tyrannies, the USSR is guilty of unleashing World War II. They try to forget about the Latvian punishers who have "distinguished themselves" in the Leningrad, Pskov and Novgorod regions of the Russian Federation in Belarus. The Riga Occupation Museum was created - Russia, the USSR, Russians for Latvian schoolchildren - “Oriental barbarians”, “invaders” guilty of the “genocide of Latvians”.

Children are raised in the same spirit in Estonia: in fact, the “heroes” for them are fighters of the 20-th Estonian SS division, sabotage battalion of the Abwehr “Erna”, who fought for “independence”. The “exploits” of Estonian punishers are not reported at all: that the Jewish question was “resolved” in Estonia, Estonians were guarded by dozens of concentration camps, and that Estonians participated in atrocities in the adjacent territories.

Similar processes are taking place in other republics of the former USSR, just these states are the most vivid examples. It is especially sad when such phenomena are inculcated in the mass consciousness of the citizens of the Russian Federation, young people are turned into “Ivanov, who do not remember their kinship.”

We are in Yandex Zen
There are more Romanians in the world than Moldovans and Ukrainians think
Dreams of "Great Romania"
21 comment
Information
Dear reader, to leave comments on the publication, you must to register.