Barack Obama "very angry with General McChrystal for the article" 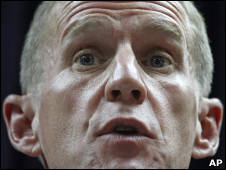 US President Barack Obama angrily reacted to a journal article in which the commander of NATO forces in Afghanistan, General Stanley McChrystal, criticized the most senior officials of the US administration, the press service of the White House reports.

White House spokesman Robert Gibbs said that General McChrystal "made a huge error in the estimates."

The publication in Rolling Stone magazine contains incriminations and ridicule of key players in American politics.

General McChrystal has already apologized for the content of the article, but was still called to Washington for clarification.

Official sources in the White House have yet to comment on whether the general can lose his position in view of the situation.

When asked how Barack Obama reacted to the article, Gibbs replied to reporters: "He was angry. You yourself would understand if you would see [him at that moment]."

According to Quentin Sommerville, a BBC correspondent in Afghanistan, the emerging critical publication is a clear indication that there has long been a deep rift between military and US officials.

One of the critically acclaimed McChrystal representatives of the US authorities - Pentagon chief Robert Gates said in an extremely harsh statement that "General McChrystal made a gross mistake and demonstrated his inability to give sober evaluations."

“General McChrystal has already apologized to me and is now looking for contact with the others whose names were mentioned in the article in order to apologize to them too. I called the general to Washington to discuss the situation in a personal conversation,” Gates said.

An article in Rolling Stone under the heading "Runaway General" will only appear in the magazine next Friday, but General McChrystal decided to launch a preemptive strike and reduce damage to his image.

“It was an appraisal mistake that I had no right to make,” the general admitted. “Honor and professionalism have always been fundamental values ​​for me, but in this article I have changed them.”

NATO spokesman James Appathurai said on Tuesday that the article was indeed “unfortunate,” but the secretary general of the Alliance, General Anders Fogh Rasmussen, “completely trusts General McChrystal and his strategies.”

The main blow in the article is directed against Karl Eikenberry.

According to McChrystal, the ambassador "betrayed" him during the debate at the White House about sending additional troops to Afghanistan.

The general assumes that Eikenberry used the leaked data of internal correspondence, which raised the question of the expediency of sending additional troops in order to protect himself in case this decision would later be criticized.

“I like Karl, I have known him for many years, but he never told us anything of the kind,” McChrystal writes. “He decided to cover the flanks for future textbooks stories, and if now we fail, he will say "well, I told you so!"

Got in the article and the special envoy of the United States in Pakistan and Afghanistan, Richard Holbrooke.

According to analysts, McChrystal objected to the decision to begin withdrawing troops in July 2011.

In an article in Rolling Stone, much attention is paid to the rapid diplomatic processes in Afghanistan.

On Monday, the most senior British diplomat in Afghanistan, special envoy Sir Sherard Cowper-Coles went on a long vacation after a conflict with a NATO representative and the US administration.

The report of the US Congress, which states that the security companies are being paid for the safe passage of convoys with cargoes for the US military, caused no less sensation. The report argues that if these firms do not receive money, columns are attacked.

Meanwhile, Stanley McChrystal has already found support in the face of Hamid Karzai, who considers him "the best commander."

Hamid Karzai’s spokesman, Wahid Omar, said that the president of Afghanistan strongly supported the general and hoped that Barack Obama would not rush to replace him.

According to Omar, Hamid Karzai considers General McChrystal "the best commander who perfectly understands the Afghan people and Afghan culture."