Putin refused to give in to WTO requirements 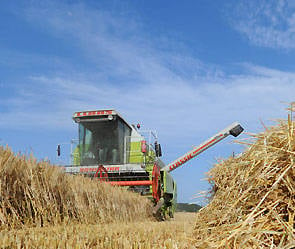 
Russian Prime Minister Vladimir Putin spoke about this at the congress of the Russian Agrarian Movement in Rostov-on-Don. The head of government said that when entering the WTO, the country will retain the right to increase agricultural subsidies. Putin noted that the Russian representatives at the negotiations are trying to achieve the best conditions for the domestic agro-industrial complex. “I can say once again that we are ready to carry on a dialogue with partners only on an equal basis. We will firmly uphold the interests of domestic consumers and producers,” the RIA head of government quoted as saying News.

They talked about one of the most pressing issues of the ongoing negotiations regarding the entry into the WTO - the supply of livestock products. The Prime Minister said that Russia would not make concessions on those items that could harm domestic agriculture. "We have spoken all that we wanted to overcome - except for the access of animal products to our market. They insist that we keep the current order of access," the premier said. Putin stressed that Russia is not satisfied with these conditions, the country will seek to reduce quotas. For their part, the current suppliers want to maintain the status quo, and in addition Brazil has begun to demand quotas for itself.

Regarding the development of the domestic agro-industrial complex, the chairman of the government said that in 2012, 130 was allocated for agricultural needs billion rubles, that is, 12 billion more than previously thought. In this regard, Vladimir Putin asked the participants of the Russian Agrarian Movement to make proposals for the preparation of a new state program for the development of the village for the next planning period.

Putin also raised the issue of expanding collateral for loans for agricultural producers. "I propose to think about expanding the range of possible collateral. For example, to lend more actively to enterprises on the security of agricultural land or a future crop," said the Prime Minister. Putin instructed the Agricultural Bank to develop appropriate concrete proposals.

During a trip to the Rostov region, Vladimir Putin visited the Zavety Ilyich Agricultural Production Cooperative. The prime minister talked to the company’s employees and watched the harvest. The head of government inquired about the situation with the availability of fertilizers, agricultural machinery and fuel and lubricants.

The chairman of the cooperative, Sergey Ponkratov, replied that the average price for diesel fuel is much lower than the market price, and subsidies were allocated for the purchase of fertilizers, which saved about 20% of funds in this expenditure column. The equipment used by agrarians is mainly Russian, and foreign equipment is used in the absence of domestic counterparts. Putin, in response, said that it was decided to save the preferential prices for fuel and lubricants until the end of the year, and a long-term agreement was concluded with mineral fertilizer producers to limit the growth of their products.

The prime minister also recalled the lifting of restrictions on the import of agricultural equipment. Speaking about the situation with an increase in the fuel standard, the head of government said that this process will go gradually, but the transition to a new technological level is necessary to increase the competitiveness of the village.

Vladimir Putin expressed his support for the domestic producer, noting the excessive enthusiasm of European farmers for chemicals. “I also love ice cream. I’m watching that if our ice cream is ours, I’ll take it,” said the Prime Minister.

At the end of the meeting with farmers, the head of government asked a question about the social situation in the cooperative. Upon learning that the agronomist, who decided to marry in September, lives with the bride in a one-room apartment, Vladimir Putin offered Sergei Ponkratov and the Minister of Agriculture of the Rostov Region, who was right there, to make a gift to the young family.

We are in Yandex Zen
The action “Military service under the contract is your choice!” In Rostov-on-Don: future contract servicemen, exhibitions and “Russian Knights”
11 comments
Information
Dear reader, to leave comments on the publication, you must to register.