24 2011 June
11
Not so long ago, information appeared in the press that Chechen investigators appealed to the Ministry of Defense of the Russian Federation with a request to provide accurate addresses and personal data to officers and soldiers of military service who took part in the liquidation of the militants during the first and second Chechen campaign. For the first time, this fact was reported by the Free Press publication just a few days after the murder of the former officer, a participant in the war in Chechnya, Yury Budanov. The press service of the head of the republic of Chechnya, Ramzan Kadyrov, confirmed the published information and, moreover, all copies of the documents in which the publication has been recognized as authentic. 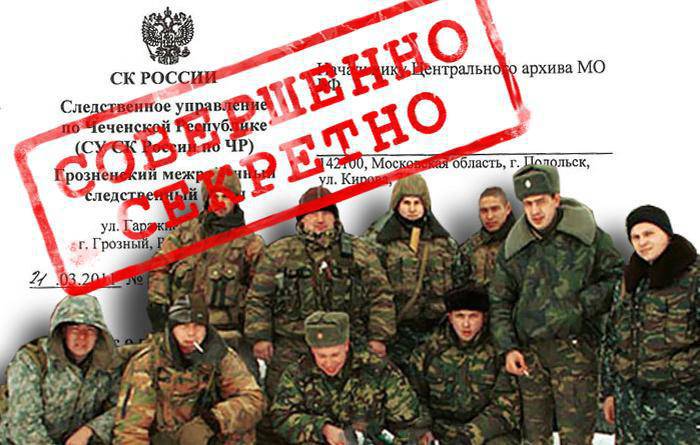 The first mentions of requests to the Ministry of Defense of the Russian Federation from the Investigative Committee of the Republic of Chechnya appeared immediately after the murder of Yury Budanov and were considered as one of the versions of the murder. So, in particular, Russian investigators suggested that law enforcement officers helped the killer to go to the ex-colonel. As is known, after Budanov had served the sentence for the murder of the Chechen woman Elsa Kungaeva, his whereabouts was known only to a narrow circle. Similar assumptions about the transfer of data on the location of law enforcement officers were made after the murder of Anna Politkovskaya.

Copies of the documents mentioned above were handed over to the SP by the unknown person who wished to remain incognito. Each of these documents constituted a request for a specific soldier or a requirement to provide data on military personnel who served in a particular place. The request indicates that the Investigation Department of the Republic of Chechnya requires the transfer of all personal data specified by the military, including addresses of current residence, marital status, place of work. The press service of the head of the republic of Chechnya, Ramzan Kadyrov, explained that all the information requested by the investigators is necessary to conduct investigations into the facts of war crimes during the first and second Chechen campaigns. Ramzan Kadyrov’s position in the federal security structures is refused to be maintained and requests for the transfer of personal data are ignored. Chechen investigators, receiving rejections at their requests, claim that the Ministry of Defense of the Russian Federation frankly sabotaged the investigation and identification of those involved in war crimes.

But the question arises why, after so many years, the Chechnya Investigative Committee suddenly became so interested in war crimes? For the most part, this does not resemble legal actions, but as an attempt to reprisal Russian military personnel who are now accused of war crimes. At the same time, banditry and full-scale training of terrorists continue to flourish on the territory of Chechnya, but local investigators simply do not see this, they are not interested.

Russian soldiers in Chechnya, excuse me for not collecting flowers, but participating in a war, a cruel, bloody, merciless war. And those with whom they fought were not peaceful and innocent citizens, but specially trained and sufficiently funded militants and not only representatives of Chechnya, but also militants from many countries of the world.

Today, Chechen law enforcement officers can talk about their dedication to the law as much as they like, but for the most part this is reminiscent of the work of snipers during the war (mostly women) who demanded 600 US dollars for a killed Russian officer.
22.06.2011.Sergey Dorenko: Chechen Investigator Requests

We are in Yandex Zen
Who is interested in discrediting Ramzan Kadyrov?
“As I told you, it was so. Do not trust anyone!"
11 comments
Information
Dear reader, to leave comments on the publication, you must to register.