The President of Afghanistan has already spoken a lot 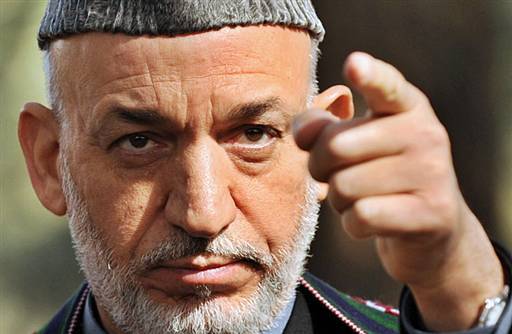 Pentagon chief Robert Gates has officially confirmed that American diplomats are in talks with representatives of the Taliban movement. Moreover, according to him, the meetings are held without the participation of representatives of the Afghan government Hamid Karzai. According to experts, this means that the United States has finally become disillusioned with the Afghan president.

On Sunday, CNN, the head of the Pentagon said that negotiations with the Taliban began "a few weeks ago" and it is too early to talk about any progress. Robert Gates confirmed that the initiator of the dialogue were American diplomats, and representatives of other coalition countries participate in the negotiations. The Pentagon chief refused to name which states were involved in meetings with the Taliban, but he emphasized that official Kabul does not participate in the organization of the peace process.

"We kept saying that this war, like most armed conflicts, must end with a political agreement," Robert Gates explained. "The only question is when this will happen and how seriously our potential partners are concerned." However, according to the Minister of Defense, the fact of holding peace talks does not mean that the United States is trying to end the war in Afghanistan as soon as possible. “I know that the Americans are tired of this war,” he said. “But after winning the first phase in 2001, the United States almost did not pay attention to the situation in Afghanistan right up to 2008. And if we talk about the right strategy and the necessary resources for the resolution of this conflict, they came to us only in the late summer of 2010. "

The unexpected recognition of the Pentagon chief, according to experts, indicates that Washington, hoping to achieve progress in negotiations with the Taliban, no longer intends to rely on the government of Hamid Karzai. And the recent harsh statements by the Afghan leader have forced specialists to re-speak about a serious cooling of relations between Washington and Kabul.

In recent months, the President of Afghanistan has repeatedly criticized the actions of coalition forces. In March, he demanded that the US and NATO immediately cease the military operation, and at the end of May he accused the American command of killing civilians, stating that if the practice of air strikes against populated areas was not revised, foreign troops could be declared enemies of the Afghan people. "History shows how Afghans deal with those who are trying to occupy their country, "he threatened.

Speaking to the participants of the international youth conference in Kabul on Saturday, Hamid Karzai said he no longer intends to thank the military coalition for the assistance provided. "They are here with their goals, perform their own tasks and use our land in order to achieve these goals," the president of Afghanistan emphasized. According to him, the "occupying troops" have already caused irreparable damage to the ecology of Afghanistan and the effect of this will "be felt even for 40-50 years."

“Every time their plane takes off, it produces smoke. When they drop bombs, chemicals come to our land. Our people die, but at the same time nature suffers,” the Afghan leader recited claims. He also questioned the international assistance program, according to which coalition countries are building schools, roads and hospitals in Afghanistan. “They are building these roads not for us, but for themselves, for their large trucks with huge wheels,” Hamid Karzai said.

Until recently, Washington tried not to comment on such statements by the Afghan leader. In private conversations, State Department officials usually referred to the fact that Mr. Karzai’s statements are designed exclusively for “the internal audience and are intended to strengthen the president’s position among voters tired of the long-term presence of foreign troops.” However, the speech delivered by the Afghan leader over the weekend caused an unexpectedly sharp response.

The very next day, US Ambassador to Kabul, Lieutenant General Karl Eikenberry, said that the American side was ready to reconsider its relations with the Afghan government. "Helping this country has already cost the Americans too much," he recalled. "And when we hear that we are considered invaders and say that we are here to pursue our own interests, we no longer see any reason to be here." ".

We are in Yandex Zen
A great interview with Sergey Lavrov: about Ukraine, Obama and Iran
What you didn't want to know about England
5 comments
Information
Dear reader, to leave comments on the publication, you must to register.