Expensive gifts of the USSR and Russia 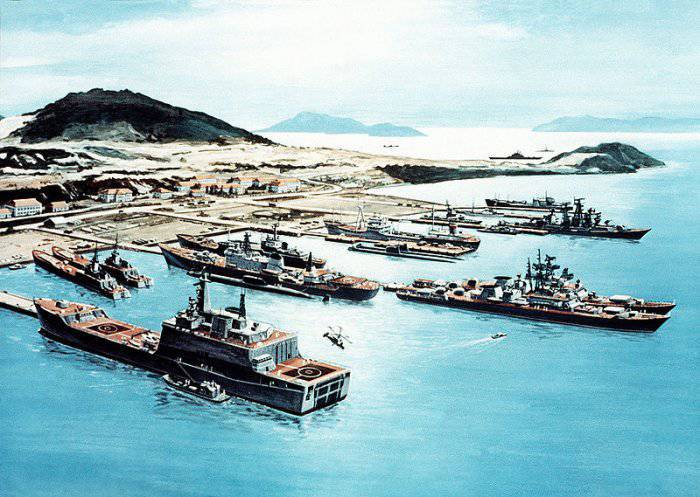 In 2001, the former President of the Russian Federation, Vladimir Putin, without worrying about public motivation and the opinion of the people, decided to liquidate our last significant military bases in Cam Ranh (Vietnam) and Lourdes (Cuba). Russia received nothing substantial in return, but the resulting dangerous military-political glades are visible to the naked eye. But few people remember that the Kremlin’s reckless voluntary geopolitical retreat began much earlier - from the famous Port Arthur. At the end of May, the anniversary of the day when the last soldier of the Soviet Army left the city on the Liaodong Peninsula, which stood on Russian graves, was celebrated. Chinese Lüshunem Port Arthur again became 26 May 1955 of the year.

But first you need to look into earlier strata. stories. For more than 50 years, attempts by Tsarist Russia to firmly foot in the Far East were connected with the never-freezing port of Port Arthur in the Pacific. China, in 1896 year, was in dire need of allies in the ongoing confrontation with Japan, was forced to sign with Emperor Nicholas II the convention, according to which, Beijing transferred our state in full and exclusive use for 25 years of the naval bases of Dalianwan and Lushun, also allowed to build a branch of the East China Railway from the city of Harbin to these ports. The Russian emperor, who also did not expect anything good from belligerent Japan, wrote about this in his diary: "This is so good that I can't even believe it."

At the same time, much of what seemed to Nicholas II as wonderful was subsequently a disaster for the entire Russian people. Luishen, literally for several years, became Port Arthur and the main Russian base of the Pacific fleet. The total number of the Russian garrison of ground forces on the day the war began was 24 thousand soldiers and officers. By this time, 15 thousand Russian civilians and 35 thousand Chinese were constantly living in the city. 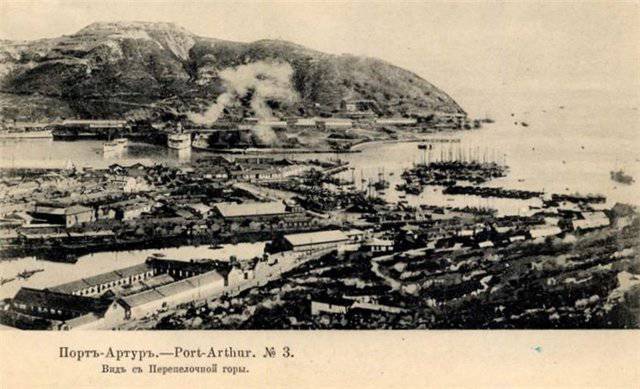 The Japanese could not tolerate such impressive military power at their side for a long time and declared war, in which Port Arthur played a prominent role. The battle for Port Arthur, which lasted about 8 months, cost the Japanese fleet and the army enormous losses, which ultimately amounted to more than 112 thousand people and 15 ships of different classes. The loss of the Russians amounted to about 28 thousand people. In December, 1904, the city was completely cut off from Vladivostok and the Manchurian army.

Russia has been waiting for satisfaction for four decades. With the capitulation of Japan in 1945, Port Arthur returned to Russia again. Commander-in-chief of the Soviet Army, Stalin expressed his opinion on the value of this fact: “Japan began its aggressive behavior against our state back in the distant 1904 year during the confrontation of the Russian-Japanese war ... As you know, Russia suffered a defeat in the struggle against Japan. It was clear that Japan is setting itself the task of tearing away the whole of its Far Eastern territory from the territory of Russia .... But the defeat of the Russian troops in 1904 during the Russo-Japanese war ... it was a black spot on our state. The Russian people believed and waited for the day to come when Japan would be finally broken and the stain would be eliminated. For forty years we, the representatives of the old generation, have been waiting for this day to come. ”

The base, important for the Pacific Fleet, was once again transferred by Peking to our state - this time by 30 years. Again, Moscow has spent huge amounts of money on the development and maintenance of Port Arthur. By the year 1950, the quantitative composition of the new USSR naval base in the Yellow Sea, headed by Rear Admiral Tsipanovich, was as follows:

1. A team of torpedo boats, consisting of several dozen military units of various types of Soviet and foreign construction.

2. A separate division of patrol vessels of six Lend-Lease Tacoma frigates of the United States.

3. A team of submarines in the amount of twelve submarines.

4. The team of protection of the water area in the amount of six minesweepers and six hunters for enemy submarines.

The garrison consisted of units and formations of the Soviet 39 st army army. To support the ships, numerous coastal units were created, as well as the 194-I bomber division, which included 126 Tu-2 type 1944-1948 aircraft. In general, the garrison was significant and allowed the USSR on the long-range Pacific borders to effectively resist the powerful naval forces of the United States, relying on bases located in Japan. All of a sudden there was what happened in the fall of 1954, when a state delegation led by 1-th secretary of the CPSU Central Committee N. Khrushchev unexpectedly flew in from Port Arthur to Moscow. Shvernik, Bulganin, Mikoyan, First Deputy Minister of Defense of the USSR - Commander-in-Chief of the Navy Kuznetsov, Commander of the Far East Military District Malinovsky and many others arrived with him. 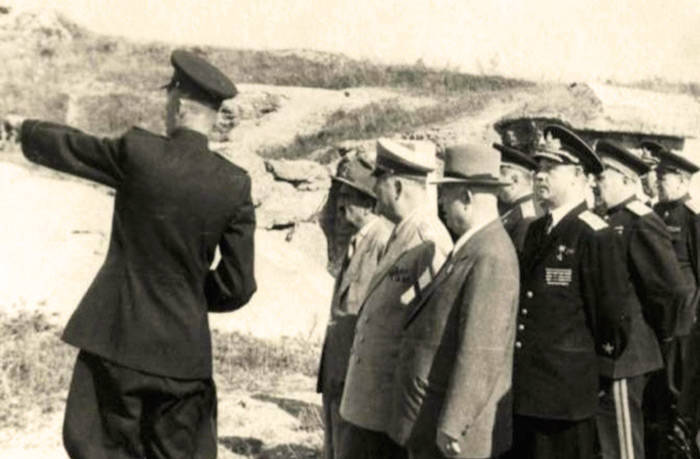 October 13 who knew nothing about the emergency evacuation of the military was invited to report. A few days later, after the Soviet government delegation left for their homeland, countless Chinese commissions made frequent visits to the Soviet military units, including government commissions with influential guests. Many Soviet soldiers were presented with PRC awards. In the House of Officers in a constant succession there were performances of famous and popular artists. At the same time, military property was “sold”, which eventually turned into the real circus and was stopped. Everything - fire-fighting equipment, every hanger, bed, kitchen utensils, a washstand, every little thing was “described and made out” in the 6 copies. And every morning at the base began with the fact that there was a merciless bargain for every extra yuan. With the advent of the new day, everything was repeated again ...

It ended up with the fact that only in the Soviet “department” dozens of torpedo boats, a forge, six planing, metalworking and turning machines, an electric workshop with all the equipment were practically donated to the Chinese. In other words, we left the Chinese literally everything, starting with submarines, tanks, a barracks, ammunition and ending with a mattress, pillow, mug, spoon, plate. ”

In short, the departure of Soviet troops from the Port Arthur base, provoked by Khrushchev, strongly reminded that after a little more than three decades, the successor of Khrushchev, Mikhail Gorbachev, arranged for the Soviet Armed Forces in Eastern Europe, leaving the property to the mercy of a billion dollars. What did Khrushchev think about when, in his characteristic boorish manner, he gave the order to front-line generals - “Sell everything”? It is clear that he sought to strengthen the "century-old", as he surrendered, friendship with like-minded communists in Beijing. And yet, he introduced the de-Stalinization policy, which is so fashionable in today's time. In this case, the Americans beat Khrushchev as a street boy.

When Joseph Stalin was still in power, the leaders of Western states were actively discussing the question of how they would be able to change the world after the apparent near death of the Generalissimo. At the start of 1953, British Prime Minister Winston Churchill and US President Harry Truman held talks on this issue in Washington. It was decided to draw a motley picture to the post-Stalin government of the Soviet Union: you are removing your troops from Finland, Austria and China. In return, we will abolish economic sanctions from the USSR, which is weakened by the war, and we help speed up the development of the socio-economic infrastructure of your country. As a confirmation of the sincerity of intentions, the United States and its supporters really weakened such sanctions in the late spring of 1953, and in the early summer of the same year refused to help the anti-Soviet forces that tried to revolt in the GDR.

In order for the carrot to be more tangible, after the death of Stalin in the autumn of 1954, new commercial and state credit lines were provided for the USSR in the NATO member states, as well as in Australia and New Zealand. Konrad Adenauer, Chancellor of the Federal Republic of Germany, in 1955 in Moscow solemnly guaranteed Khrushchev long-term economic and social cooperation and the inviolability of the zones of influence of the USSR in the world. The reparation payments of the USSR stopped by the FRG in the 1949 were resumed. As compensation, the West asked for a mere drop: to demonstrate at least a slight departure from the despotic Stalinist policy and the reduction of the Soviet military presence in China and the Baltic.

Nikita Khrushchev was very zealous at first. Since 1954, the publication of Joseph Stalin’s works has been interrupted. At the end of 1955, the Information Bureau of the Workers and Communist Parties formed at the initiative of Stalin, Molotov and Zhdanov was abolished. There is nothing to mention about the anti-Stalin speech of Nikita Sergeevich before the deputies of the Twentieth Congress of the CPSU.

Of course, against the background of these large-scale political games, what was the Port Arthur base? On foot. Khrushchev sacrificed it with extraordinary ease. As a little later, and the Soviet naval base in Finnish Porkalla-Udd.

The overall picture after the battle did not please him. After a while, the subversive informational work of the West against the USSR even intensified. In the period 1958-1959. The US Congress approved the resolution "On the enslaved peoples." In accordance with this document, the development of plans for the dismemberment of a united USSR into several puppet countries was begun in the near future.

The US Army did not plan to leave its own military bases in the Philippines, Taiwan, Japan, and South Korea. As acknowledged by the American military, it was the absence of the USSR in Port Arthur that became the main “incentive” for the American invasion of Indochina in the 1966-1974 years.

General Stoessel, who surrendered Port Arthur to the Japanese in 1904, was sentenced to death in Russia. The court found that throughout the entire period of defense of the military port, Stoessel did not direct the actions of the garrison for defense, but, on the contrary, consciously and methodically prepared it for surrender. The sentence was later replaced by 10-year imprisonment, but already after 5 years, the soft-hearted Russian emperor finally forgave the disgraced officer. In the history of the USSR, Khrushchev remained a political madcap who did not only do things in the Far East, but also in other places. The assessment of Vladimir Putin is still ahead, but you can be sure that his descendants will not forgive him for such actions.
Ctrl Enter

We are in Yandex Zen
How Port Arthur once again became the "city of Nashensky"
Siege of Port Arthur as a black page in Japanese military history
2 comments
Information
Dear reader, to leave comments on the publication, you must to register.