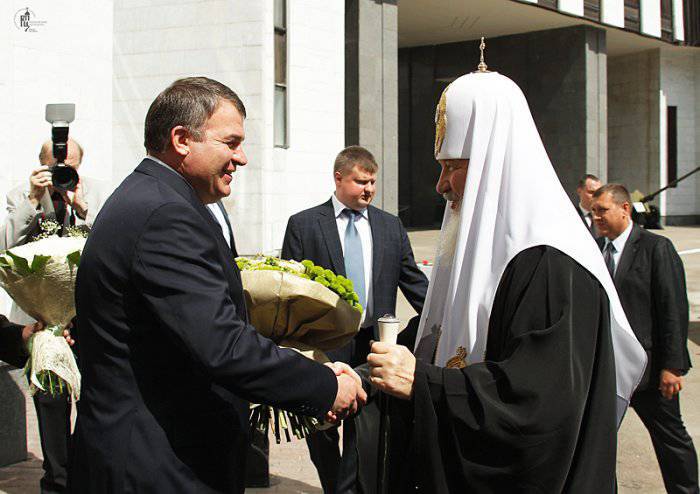 Patriarch Kirill called deviation from military duties a deadly sin. 31 said this at a meeting with students of the military academy of the General Staff of the Armed Forces of the Russian Federation, and A. Serdyukov, the head of the Ministry of Defense, also attended. The main phrase of the patriarch at this meeting, in my opinion, was the following: “And the most important priority is the fear of God - fear is not emotional, not adrenaline, but fear as a moral category, as a system of values. Then man realizes that it is impossible to act against the will of God, that treachery is a deadly sin, evasion of one’s direct duties or violation of the oath is a deadly sin; and this understanding penetrates to the depths of the human soul. " In addition, it was reported that 240 military clerics were introduced into the staff of the Armed Forces of the Russian Federation, and they would be taken by priests of the Orthodox Church, as well as representatives of other religions traditional for the Russian Federation. Thus, the process of reviving the so-called. "Chaplaincy Institute".


The Patriarch proposed to allocate "chaplains" special premises in the territories of military units, so that the military priest could, apart from educational work with the military, perform services, "confess, commune, pray." 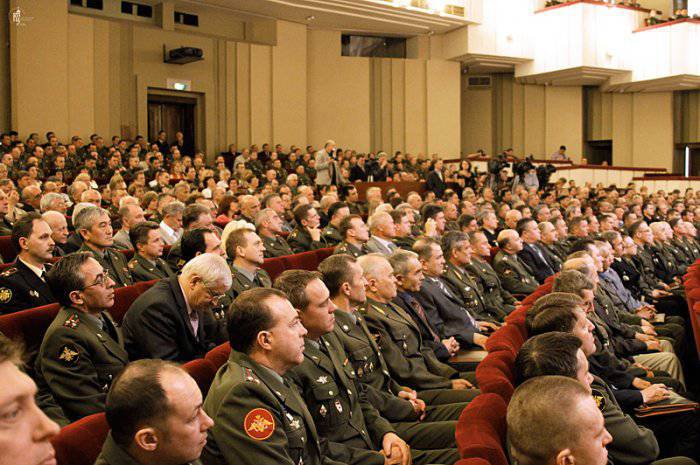 The myth of the Great Patriotic War, the Stalin era, which Cyril supported and introduces the Church into the minds of the parishioners

- The myth of the Reich as a high-tech adversary, and the USSR is backward, remembered the image that the liberoids loved - the “three-ruler for two with one cartridge of cartridges” and further even more fun “people went towards tank wedges with the same three-ruler for two or three. " The patriarch, apparently, mixed up the First and Second World Wars - “rifle” and “shell” famine, it was in the First World War. When they just fought "For Faith, Tsar and Patronymic." By the time of the Great Patriotic War, the USSR was not inferior in technology and industrial capacity to the Third Reich, which is why Magnitogorsk beat the Ruhr.

What the patriarch said is true

“Russia, as a state with countless riches, a unique geopolitical position, with enormous opportunities,“ has always been a desired object for those who would like to use for themselves all the advantages that God wished to give to our people ”.

- There are few states in the world that, like Russia, “were subjected in their stories so powerful manifestations of external aggression. " 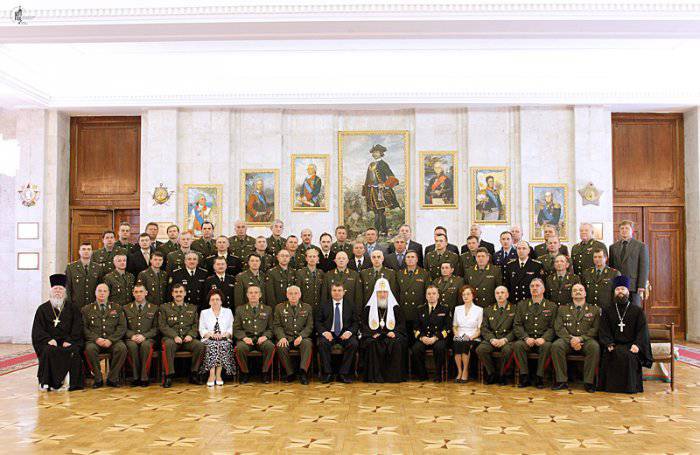 What does this message mean?

- First, Moscow repeats the mistakes of the Russian Empire, realizing the project “Petersburg-2”. The church is still trying to replace the popular idea of ​​the Russian civilization with its dogmas. The very ideas of Christ have long been forgotten, Leo Tolstoy tried to remind people of this. So, and the current novostroi (temples), foreign cars and a full life of the church hierarchs, their silence 20-year-old about the genocide of the people, against the background of disasters of the masses, sheer hypocrisy and pharisaism. The result will be the same as in the 1917 year. Russian will not be "slaves of the Lord".

“The patriarch is lying that“ the most important priority is the fear of God, ”while our ancestors said the opposite — not for fear, but for conscience. Fear is one, or even the main sin and weakness of a person. According to him, the army must fight "for the fear of God" and not for the Truth, the Motherland ?! Fear is from the animal origin of man, it gives rise to lack of will and lies. It is by fear, horror (terror) that the rulers and the “world behind the scenes” control people, introducing the so-called “electronic concentration camp” on the planet. Our ancestors, the Rus-Russ, were famous for their fearlessness, they were ready to die for their Ideals, for the Truth, for not retreating from Conscience.

How little remained in the Russian Church from the spirit of Sergius of Radonezh, in fact, the church has become a business shop that helps in selling Russia, an instrument of breaking the Russian Spirit. It is unfortunate that the Church at the present time cannot give birth to the titans of the Spirit, who would be able to give a life-giving impulse for Russia, to clean the Augean stables of the present Church, mired in greed and thoughtless formalism. 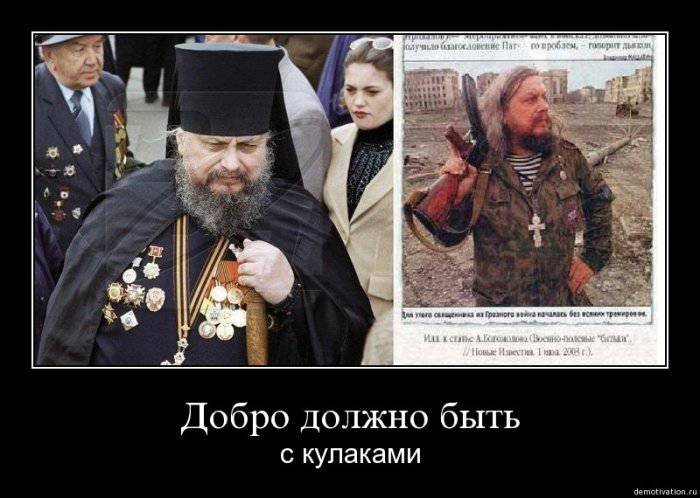 Ctrl Enter
Noticed oshЫbku Highlight text and press. Ctrl + Enter
We are
Heavenly patron of the Bulgarian-Russian friendshipAmerican airbase. Deadly capture
73 comments
Information
Dear reader, to leave comments on the publication, you must to register.