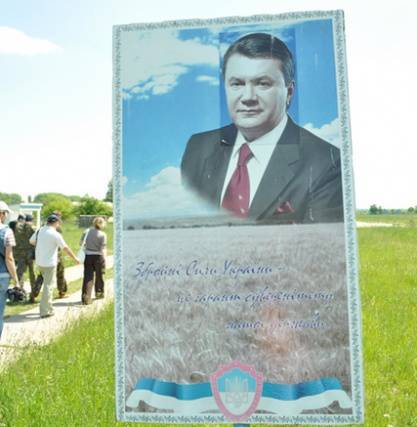 Kiev is again trying to solve its problems at the expense of Russia, and it has launched a real offensive on all fronts - in fact, a new round of “gas war” is beginning, the Sevastopol authorities are demanding an increase in the payment for the Black Sea fleet to the treasury of the city. And this is against the background of the complete failure of Kiev’s plans for European integration, the catastrophic fall in V. Yanukovych’s ratings.


The latest problems of Kiev

- According to a study by the Razumkov Center, in May 2011 was fully supported by the activities of President of Ukraine V. Yanukovich 10,9% of citizens of the state, while in May 2010, this level reached 39,1%. In general, almost half of the respondents do not support the current Yanukovych - 48,1%. Even the rating of Russophobe Yushchenko did not fall at such a fast pace.

The main reasons for this: Yanukovych’s failure to fulfill his election promises did not confirm the image of a “strong manager” created for him, the image of the main defender of the rights of the Russian population, a supporter of rapprochement with Russia, the end of the former Russophobic course. Yanukovych was just another "modernization" of anti-Russian, pro-Western leaders.

- The course towards integration into Europe, continued by Kiev under Yanukovych, completely failed. The myth of the coming happiness in the EU burst. In a way, it resembled the myth of “building communism” by 1980 - joining the EU should have solved all the problems of Ukraine. 25 May 2011, the European Commission announced a new strategy for the so-called. European Neighborhood Policy. Neighboring countries of the EU will now be able to get 7 billion euros, but Kiev is not threatened, much less Ukraine and the prospect of EU membership. An application may be submitted, but it does not mean the possibility of joining the EU. There is no one who wants to take on Ukraine’s problems in the EU, they don’t know what to do there with other bankrupt countries. Even financial aid to Kiev cannot be seen - for this, according to European Commissioner for Enlargement and Neighborhood Policy Stefan Fule, Ukraine had to “better” show itself in the previous period. And they do not believe in the success of Ukrainian reforms in the EU, as well as in the success in the fight against corruption. Problems with the so-called changes in the "development of democracy in the country"; in 2010, the progress report on the implementation of the European Neighborhood Policy in Ukraine stated: “The EU expresses concern about the decline in respect for fundamental freedoms and democratic principles in Ukraine”.

As a result, Ukraine has lost the "pink bubble", and then what? Is it not time for the Ukrainian intelligentsia and the authorities to get rid of the marasmic, pro-Western myths ?! Or is it also necessary to destroy the country?

“Since Ukraine is actively negotiating with the EU to sign an agreement on a free trade zone, and several times refused Moscow’s offers to enter the Customs Union.” So, in April of this year, V. Putin even flew to Kiev to break through this decision, with a modified formula - “3 + 1” (three countries of the CU plus Ukraine as a “friend”). Therefore, Moscow has already imposed sanctions on Ukrainian imports since 2005. Currently, Belarus and Kazakhstan are going to do this. It hit the metallurgy and chemical industry of Ukraine. On line meat and dairy products of Ukraine. And all the problems are connected with the persistent desire to integrate into Europe.

Claims to the Russian Federation

- Ukrainian Prime Minister Mykola Azarov at the talks in Moscow with Vladimir Putin wanted to get a discount on natural gas. Before that, he stated that the calculation formula would be revised and Ukraine would reconsider the price for transit through its territory. But he refused.

Miller voiced a deadly figure for Ukraine - 500 Dol. per thousand cubic meters. Kiev, and so is experiencing a severe shortage, reduces consumption. Plus, the failure of the pension reform, the emission of the hryvnia. Ukraine is waiting for the scenario of Belarus for the fall, only in 2-3 times the worst form, the economy of Belarus looks more stable. Kiev "sat down on two (three) chairs" - now, on the one hand, the failure of the EU accession negotiations, on the other hand, Moscow does not want to encourage the western course of official Kiev at its own expense.

Moreover, Kiev is also trying to put pressure on Moscow through Europe, for this the “Tymoshenko case” is going on, which allegedly signed a contract with V. Putin in exchange for the closure of criminal cases against her by the Russian Defense Ministry. Even the possibility of summoning Putin to be interrogated in this case was voiced. A gas contract will be challenged in an international court.

- The authorities of Sevastopol demanded an increase in contributions to the city’s treasury from the Russian Black Sea Fleet. The theme of the fleet in Ukraine is always linked to gas issues, a kind of blackmail, they say, you will crush, we will reconsider the contract and "ask" from Sevastopol.

In the end, while Kiev, instead of starting a real economic cooperation with the Russian Federation, leads small-town "wars", only worsening its position. Anyway, the West needs Kiev, only to contain Russia. The illusions about entering Europe should be forgotten like a bad dream.

We are in Yandex Zen
Situational analysis of the death of the MH17 flight (Malaysian Boeing 777), made on the basis of engineering analysis from 15.08.2014
Credit rating of Russia against the ratings of the BRICS countries and the republics of the former USSR
145 comments
Information
Dear reader, to leave comments on the publication, you must to register.