Saving the Southeast, Russia saves itself 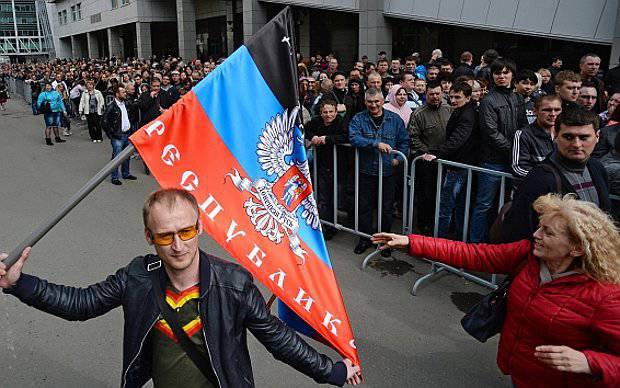 The same Russians live in Ukraine, which became a divided people after the collapse of the USSR

The newly elected president of Ukraine, Petro Poroshenko, whom Moscow either acknowledges, or not quite, announced his priorities as interesting as all Ukrainian politics: visit the “problematic” south-eastern regions - not to reassure people, to encourage and enchant.

To charm is nontrivial - with new bombings and threats to return the Crimea to Ukraine ...

On the pages of our portal, a survey finished recently, which showed a rather curious alignment, even if not unexpected. 97% of our readers answered in the affirmative to the question about the need for Russia's intervention in the internal affairs of Ukraine. Only 3% is against (not otherwise Yarosh with Tyagnibok is still thrown on their resources).

Interestingly, a year ago, the results of a similar poll differed strikingly, though not qualitatively - 2013% of our readers spoke out for intervention in the spring of 54, and 42% were against. Then, as it is easy to remember, there was another alarm on the agenda - whether Ukraine is “euro-associated” or does it take a course towards a customs union with Russia, Kazakhstan and Belarus. All, with the Crimea, Donetsk and Luhansk. How naive were some then, believing that this question has a simple answer that will allow to close the topic ...

Now, one would hardly be surprised at such a transformation of public opinion toward the unconditional introduction of troops. It is absolutely adequate to the prevailing circumstances, moreover dictated by the presence of a mandate to deploy troops, which was given by the Federation Council to the Supreme Commander 1 in March this year. But so far we have only decided to limit ourselves to military exercises near the western borders, which, of course, frightened Kiev and well confused the maps, threw off their “blitzkrieg” at the Donbass.

In general, opponents of the entry of a peacekeeping contingent, including from among the hot statists, lead to seemingly convincing arguments. No, this is not about sanctions (others worry about them), but about the consequences that are much more dire - for example, the prospect of getting a well-quartered NATO contingent somewhere a couple of kilometers from the Russian border in Chernihiv, Sumy, and perhaps Kharkov regions.

“We are specially provoked! We must not allow a fatal mistake, we need to calm down emotions and turn on the mind! ”, The near-Kremlin military strategists broadcast, angrily resenting themselves at the“ provocateurs ”already inside Russia, who consider this position to be treacherous.

But no one says that the introduction of troops is a simple solution. Inevitable costs are calculated by our “hawks” more than. No illusions, no separation from reality. But then what would you do with the situation in the Donetsk and Lugansk people's republics? How to explain the position of Moscow to citizens of Odessa, Kharkiv and Zaporozhye? They should try to rely on her support if anything?

“Now not only the DPR is threatened, but the whole of New Russia, the Crimea and Russia,” stated Eurasian political scientist Alexander Dugin on his Facebook page. - Putin justified the Crimea, and before that South Ossetia and Abkhazia in order to save people from genocide. The genocide of the inhabitants of Donetsk is in full swing. The eleven-year-old girl from Slavyansk is no longer holding the poster "God, how you want to live." She was killed by a Nazi sniper ... Losses among the civilian population and the militia are in the hundreds. On the destruction of people thrown regular troops. At the same time, Putin’s entourage, in fact, gives him an ultimatum so that he does not interfere in any way. It's just a real betrayal, the sixth column in his eyes turns into the fifth. In such a situation, the delay of death is like. "

It seems that the time has come for the Russian leader to at least widely articulate his personal position regarding the introduction of troops, with an analysis of all the arguments and counter-arguments. And it is desirable that in their list there was nothing about the probable sanctions.

It will be indecent.

Political analyst, editor-in-chief of Geopolitics magazine Leonid Savin gave his answer to the question proposed by our readers about the need for Russia's intervention in the internal political situation in Ukraine:

- Of course, we must intervene, because this is not about the internal affairs of Ukraine, but directly related to the Russian Federation. After all, the same Russian people live in Ukraine, which was divided as a result of the collapse of the Soviet Union.

Moreover, I think that it is necessary to honestly say that complete sovereignty in the modern world does not exist. All states somehow interfere in the internal affairs of other states. Even despite the territorial distance: the same US quietly intervenes in the affairs of Southeast Asia and Africa under the guise of promoting human rights, their own national interests, or some other tasks.

As for Ukraine, there is no doubt that the local government was initiated by Washington and Brussels in order to push the border of its geopolitical interests to the east and bring it as close as possible to the borders of the Russian Federation.

So our intervention in the internal affairs of Ukraine in such conditions will be nothing more than the protection of the national interests of the Russian Federation.

But how can we make this intervention more effective, no less than that of the United States?

- Now we need to talk about reformatting international cooperation. In order to be listened to, it is necessary to enlist the help of allies - these are not only the BRICS countries, but also any of those participants in the international process who are building orders different from those built by Brussels and Washington. It is completely obvious that the satellites of the Western world are widely represented in the same UN.

So the key to the solution is to build high-quality bilateral relations with a number of states that in certain situations can come up with us in a united front, but of course we should also support them in solving their specific issues.