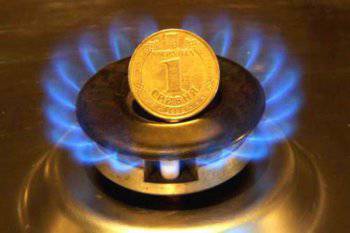 These days, between Russia and Ukraine, through the mediation of representatives of the European Union, “gas” negotiations are taking place, in which the situation should be clarified by several parameters: whether Russia will finally switch to a prepaid supply system, what part of the debt Ukraine will repay and whether at least some in general, at what price Gazprom will supply gas to Ukraine in the near future.


The head of the Russian Ministry of Energy, Alexander Novak, after the next round of tripartite talks, said that the European Union had taken a clear position: Ukraine, under the existing contract, is obliged to pay off the accumulated debts. Ukraine’s total debt to Russia at the beginning of May amounted to about $ 3,5 billion. According to Novak, Kiev is still ready to pay $ 2,5 billion. Moreover, Ukraine promises to pay off 2 billion by 28 of May and 500 of millions by 7 of June. The Russian side, apparently, is ready for such an option of paying the debt, but on one condition that Kiev will now give official guarantees for the transfer of half a billion 7 June.

Regarding such a formula for paying Ukraine’s debt to Gazprom, the head of the EU delegation at these negotiations, Gunther Oettinger - European Commissioner for Energy, spoke:

2 billion dollars on Thursday and 500 million - 7 Jun. The state of Ukraine must consent to the transfer of this money. Ukraine is an independent state, the decision behind it and behind the board of Naftogaz.

If Ukraine does not begin to repay the debt by Friday 30 May, Russia will not cancel the prepayment system, according to which Ukraine “money” in the morning, Russia - gas in the afternoon. The prepayment system will be based on the monthly option, that is, for example, Kiev will have to pay for the July gas supplies in June. And for the amount that will be contributed by Ukraine, Russia will supply a strictly defined amount of gas.

For obvious reasons, such a system does not suit, first of all, not so much Ukraine itself, as the European Union. After all, everyone understands that immediately after Russia’s final transition to a prepaid system, Russian gas from the Ukrainian pipe will not disappear, because it will also flow to Europe through this very pipe. And, guided by the facts of the repeated application of the Kiev hand to the Russian gas destined for the European Union, it can be assumed that theft from the Ukrainian authorities will manifest itself this time. That is why Ettinger, no less than Novak, is interested in Ukraine paying for blue fuel - bringing the situation to a state in which Europeans will not receive gas already paid for by them, the EU is clearly not happy with.

However, Ukraine is not in a hurry to pay the debt. Against the background of the Russian and European requirements for the fulfillment of their obligations on the part of Ukraine, Mr. Yatsenyuk took the floor, who still remains “Prime Minister” Square. Yatsenyuk quotes LB.ua:

We want to hear the answer from Russia, including the question of returning to Ukraine 2,2 billion cubic meters of gas that Russia stole through Chernomorneftegaz on the territory of the Autonomous Republic of Crimea. This is in the prices of Russian Gazprom - 1 billion dollars.

That is, the Ukrainian “government” cannot deviate from its favorite Maidan rhetoric: respond to invoicing and financial claims with its own accounts and claims. I remember, not so long ago, Kiev demanded hundreds of billions of dollars from Moscow as “compensation for the annexation of the Crimea”, apparently intending to trade the results of the Crimean referendum. Now we are talking about a billion ...

Yatsenyuk, you see, wants to hear about the gas “stolen” by Russia, but wouldn't this gentleman want to hear how much blue fuel from Russia and European consumers was stolen by the previous Ukrainian authorities in all the years of nurtured independence? If he voiced the real volumes of theft from Ukraine, then for this money Russia could have bought Naftogaz, Yatsenyuk 10 once (although we could get rid of similar “good” ourselves), and even the whole Square ...

So, on the one hand there are trilateral Berlin talks on gas for Ukraine, where Kiev is represented by Energy Minister Yuriy Prodan, on the other hand Kiev has Yatsenyuk, who could not resist voicing his own requirements, apparently immensely believing in himself after Poroshenko announced the continuation of Arseny in his current position. And when Yatsenyuk looms behind the negotiators, behind which, in turn, such an organization as the “Washington Department of the Universe” looms, nothing positive can be expected from the negotiations. Maybe part of the debt and pay, but through whining, chewing and making delusional claims. Basically, chewing has already begun.

As soon as Mr. Prodan came out to the journalists after many hours of discussions, at which he heard the words about the agreements reached regarding the payment of the debt, he immediately started a familiar Maidan barrel organ. It turned out that Prodan Berlin discussions consider it almost ineffectual ... Prodan quotes EU plus:

We have not heard a clear proposal from the Russian side. I believe that concrete agreements have not been reached today, but I hope the consultations will continue. If we do not agree, changes to the contracts will be made by decisions in the Stockholm arbitration. Before the decision of the Stockholm arbitration, Ukraine is ready to make its calculations at a price close to the market and fair. The last price Ukraine had was 268,5 dollars.

Interesting politicians, after all, came to Ukraine ... Then they “didn’t hear”, there they “didn’t see” ... And deafness with blindness attacks them only when the essence of contacts rests on a simple question: when are you going to give money? That is deaf and blind to the words “return” or “give back”, but only to see and look in the ear when “on - take”. For Sold with his boss Yatsenyuk such a diagnosis was again confirmed.

In addition, the so-called Finance Minister Square Alexander Shlapak is added to the Ukrainian politicians, a patient with a specific ailment. He said that Ukraine, well, will definitely pay its debts, if only Russia confirms gas prices for the future. At the same time, in the opinion of Kiev, Russia should “confirm” only 268,5 dollars for 1000 cubes (price with discounts on Kharkov agreements and on timely payment for gas).
It is noteworthy that for the past two months the very Kharkov agreements have not been in force due to the reunification of the Crimea and Sevastopol with Russia, and that Ukraine has not paid a penny for gas since last year.

And if you do not confirm, then Ukraine, you see, is not going to return any debt, and will even file a lawsuit against Russia. In both!

I don’t know how in the sphere of “high gas matters” and billion obligations, but in ordinary life for that, excuse me, they beat the muzzles and the “dark ones”. Well, in fact: it's hard to imagine that for several months in a nearby store someone just gave the goods they wanted with the words “okay, then pay”, and when “later” came, this “buyer” also said that he would pay only in the case when the price for already purchased goods will be reduced by a factor of two ... The most humane Russian court in the world would expect the claim from such a “buyer”, and even more desire to satisfy all its claims to the outlet ...


It is even more difficult to imagine the state of the average resident of the Russian hinterland, to which Gazprom’s gas pipe either didn’t reach it at all, or it did, but the resident had to pay a dozen pensions for carrying the gas to his home, not forgetting to pay for the gas itself so that it would not be shut off.

We are kept in Kiev for idiots, and we are all making a fuss with these “slag-trades” ... If they don’t want a good one, then at least Ettinger, even though Obama out of his pockets, pay for Ukrainian gas. Stockholm arbitration to help them ...