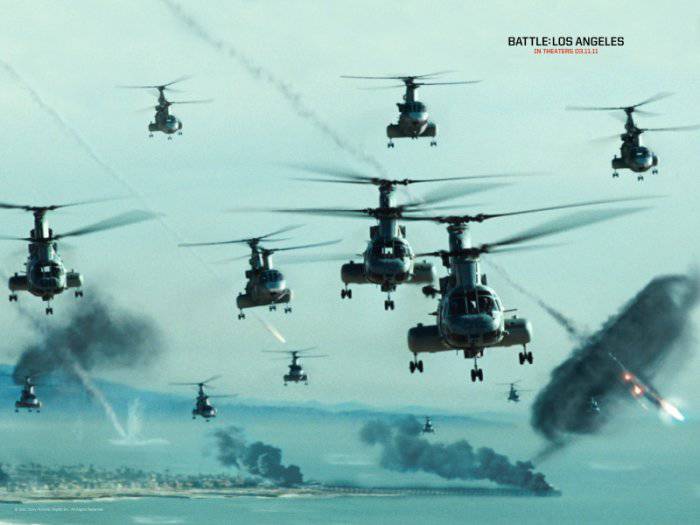 The Pentagon killed its main myth - the “myth of world terrorism,” or rather its main character, Osama bin Laden. In Russia, many people already know that the “operation 11 of September 2011 of the year” has nothing to do with radical Islamist groups. Even on TV, a number of investigations on this event were shown, for example, the film-investigation of the famous Italian journalist and public figure Giulietto Chiesa "9 / 11. Investigation from scratch."


The question now is somewhat different: who is behind this "performance" - only the US special services, or the special services of Israel also helped them. But before our eyes a new myth is being born - “alien aggressors”.

The preparation of the soil began long ago, a special role in this action is played by Hollywood, remember at least the famous film “Independence Day” (1996 year). Moreover, Hollywood performs two tasks - it makes everybody thinks and triumphs serious topics - films like “Men in Black”, and prepares the “ground”, that is, when “something” happens, for almost all this it will become “the norm”.

In most of the films, such as War of the Worlds, Skyline (2010), Alien Invasion: The Battle for Los Angeles (2011), a clear scenario emerges - the aliens deliver a sudden blow, usually on large cities, after that begins mass invasion. But people are gradually moving away from the "alien blitzkrieg" and eventually win.

What conclusions can be drawn from this: a new enemy - “aliens” - will soon be shown to humanity. One day, and for someone the last, as for those people in the “twin towers” ​​who were not aware of the Pentagon’s plans, some of the largest cities on the planet, perhaps only the United States, will be struck “from space”. It is very likely that the charges will have already been laid in advance, and for the view "from space they will strike with rockets." In reality, military space technologies will be used, which have been secretly created by secret services and military departments of several countries for more than a decade from ordinary people - one of the most famous elements of these technologies is the HAARP system. And the development of "combat UFOs" began in the time of the Third Reich.

Of course, we can say that this is all nonsense, "conspiracy theory" from the stories about "Masons and Illuminati." But almost everyone laughed at the Masons in the USSR, considering them to be harmless geeks like P. Bezukhov from “War and Peace” by Leo Tolstoy. And in modern times many facts have surfaced about the role of Freemasonry in a number of epochal events in stories Of Russia - Decembrist uprisings, February revolution 1917 of the year ...