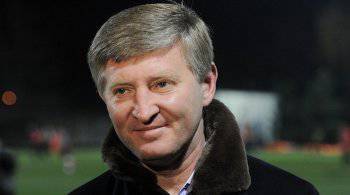 According to the "RT in Russian", on Sunday in Donetsk, a rally was held against the holding of early elections of the Ukrainian president. Several hundred people moved to the residence of the oligarch Rinat Akhmetov, staging a protest there. Later their number increased to five thousand people.


It is noted that Akhmetov himself is not in Donetsk now, so the leaders of the DPR began negotiations with his representatives, making a demand to pay taxes to the republic’s budget.

“Akhmetov’s enterprises are located on the territory of the DPR, residents of the DPR work there, who 11 may have voted for its independence. Let him pay taxes here, ”said deputy Vladimir Makovich.

The message that the residence of the richest citizen of Ukraine was taken under the control of the People’s Army of the DPR appeared on Twitter of the republic.

According to the leaders of the DPR, they expect to get an answer to their demands in the near future.

“Negotiations are currently ongoing. We hope to receive an answer as soon as possible, perhaps tomorrow, ”said the DPR Prime Minister Alexander Boroday.

It is worth noting that on May 23, the prosecutor's office of the DPR opened a criminal case against Akhmetov under two articles - “For an attempt to overthrow the government” and “For failure to pay taxes”.