About wolves in sheep's clothing 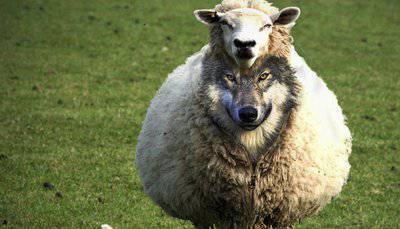 We are doing the right thing, so severely punishing nationalists of all stripes and colors. They are the best helpers of our enemies and the worst enemies of their own nations. After all, the nationalists' cherished dream is to split the Soviet Union into separate “national” states, and then it will become easy prey for enemies. The peoples inhabiting the Soviet Union, for the most part, will be physically exterminated, the rest will turn into dumb and pathetic slaves of the conquerors.
J. Stalin


Reading recently various patriotic and pro-Russian sites and materials, I noticed that in the general stream of opinions emanating from completely different levels of culture, incomes and education of people, very “interesting” streams began to appear. No, they no longer call for organizing Maidan in Moscow and do not deny the mass manifestations of Nazism in Ukraine. For a start, I will let you know what they are all about, what are their main theses.

1) Considering yourself to be Russian nationalists. But nationalists are very sophisticated sense, as discussed below.

2) Focusing on the issue of illegal immigration and ethnic crime. It is not known how (and by whom) statistics are calculated, according to which migrants are guilty of the bulk of thefts, rape and the fact that there are so many people of non-Slavic appearance (although the latter is doubtful not only as a fact, but also as a complaint). It is postulated that these migrants occupy places in kindergartens, schools and at work, bring their culture here and interfere with Russian life.

3) The rejection of the Soviet Union, they say, was ruled by the USSR by Jews and Georgians, that the Russian genocide was carried out, that the Russian people suffered and finally got rid of the "liquid communis".

4) The same rhetoric goes to modern Russia. Yes, they are destroying Russians again, the authorities want to settle the country with migrants, Russians are oppressed and dissatisfied, visa regime with the countries of Central Asia is required. Optional: it is necessary to separate the North Caucasus.

5) And everything would be fine, you say, but the most dangerous thing is that these people do not identify themselves with the Maidan and the State Department. They reverently honor Russian heroes, especially those who fought in Chechnya and in the South in general, identify with much of what is dear to us, but add “Russian nationalism” to this. Yes, the nationalists went to the Donbass, the Russians fought against the Chechens in Chechnya (and not part of the Chechens against multinational Russia), the Russian nationalists won the Great Patriotic War too (yes, the Russians took the brunt, but did the nationalists?).

6) And finally, the same idea is carried out as that of the Manezhka 2014 - this power is anti-Russian, it needs to be changed, perhaps, as a continuation of the “Russian Spring”.

What are the conclusions from this? This is the most important part of my message. Yes, in Russia there are problems exacerbated by illegal (or excessive) migration, yes, the power is not ideal and the Russian people are really great. But after all their rhetoric is based on it! After all, she is not in money, but in truth. I added a bit of truth to the absolute nonsense - and it doesn’t look that simple (just like in Crimea :)).

Surely some readers in life have some problems, for example, they did not go to university, they were fired from work, the son is studying for three, and his daughter 14 has had condoms dropped out of the bag. Surely your family also shared a teaspoon of oil for a week in the nineties of a child, as, for example, one time was in my family.

If you are old enough, remember your rage and anger when our planes and ships sawed, destroyed factories and sold for a penny, when they demolished everything that our ancestors created, finally, when they bombed the country, for which almost a hundred years ago the Russian people entered into an unprecedented cruelty battle. Is this really the fault of the migrants? If yes, then the article is better for you not to read, you cannot be helped by anything, only mass executions will save the Motherland. Joke. In this case, even they will not help.

And all this would be meaningless if it were not for the possibility of a constructive based on the above. What, in my opinion, it is necessary or not necessary to do the authorities and all of us.

It is useless to put the soul in a dispute with such characters. If you have time, then you can show that he is wrong, only not to him, but to the public. He most likely does not give a damn about both immigrants and Russia, he just makes money. And you, entering into a meaningless dispute, money, on the contrary, most likely, will lose. And most importantly, what is not needed is to breed espionage and enclose everything. This is especially true of the state, since if, for example, it toughens the responsibility for calling for the overthrow of power, then these people will simply go underground, will use the Feney and change tactics.

Now that is necessary. It would be wrong to treat equally paid provocateurs and honestly mistaken people. In order to facilitate the identification of one or another type of interlocutor, as an experienced user of the network, I can advise the following. Signs of an apparent provocateur and troll - recently created accounts, a small number of friends, the use of templates and obviously not written texts, so-called. "copy-paste", and, the most reliable, is the date of adding the first avatar chronologically, if the dialogue goes on in social networks. For camouflage, you can upload many photos, but the date of the first one cannot be faked. It is necessary to "shoot" such trolls mercilessly - ban, ignore, complain in support.

You can carry on a dialogue with honestly mistaken (or not with such obvious provocateurs). After all, remember - if we just get rid of such agitators, then for people with an unstable life position it will look like persecution for the truth, and in general, how will we be different from the Kiev junta?

The authorities need, firstly, to solve the problem with migrants (for example, by introducing limits on the number of visiting workers for different enterprises and conducting a test on basic working skills) in order to deprive the arguments of such "patriots" of power, and secondly, conduct a program to improve the image of the inhabitants of the Caucasus and Central Asia, forcing honest hard workers to distance themselves from hooligans and criminals, informing the population about the benefits of labor migration and, for example, promoting cultural figures who do not incite ethnic strife and propagandize others zhbu peoples.

The same work should be carried out with representatives of other nations, explaining that the Slavs are not their enemies, and that if anyone has a negative attitude towards southerners, it is only because some of the newcomers behave in an inappropriate way. Let everyone remember how we together restored the country after the Civil War, how we beat the fascists, launched a satellite and roasted under the sun of Afghanistan.