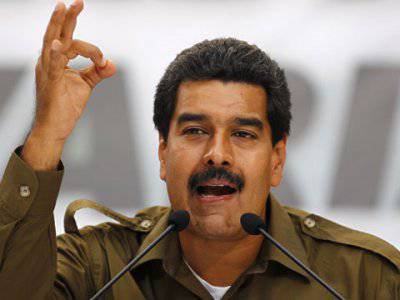 The Venezuelan authorities on Friday, 23 May, sent a statement to the Union of South American Nations (UNASUR) about the unlawful interference of the United States in the internal affairs of the state. This was reported by the agency "RIA news"With reference to the Noticias24 edition.


The statement says that Venezuela has enough evidence to confirm the repeated interference of the American administration in the internal affairs of the republic.

According to the document, the United States, through numerous unilateral statements and demands, is seeking actions from the Venezuelan authorities that are contrary to the country's domestic legislation. In particular, there are demands for the release of those accused of committing crimes.
This also applies to the threats of the United States to impose individual sanctions against Venezuelan high-ranking officials, whose guilt in violating human rights has not been proven, but is only supposed to be official Washington.

According to Caracas, the increased pressure from the Americans is part of a planned campaign launched against the Bolivarian Republic immediately after the start of mass protests of the opposition in February.

Since then, the victims of street clashes in Venezuela were 42 people, hundreds of demonstrators were injured, dozens were in prison. Organizers of protest actions demand from the government to stop the galloping inflation growth, to take more effective measures to combat crime and to release arrested opposition activists.

Meanwhile, the US Senate Commission on International Relations approved a bill on sanctions against Venezuelan officials, who, according to parliamentarians, were involved in violating the rights of demonstrators during the suppression of recent mass protests. The draft document prohibits these persons from entering the United States and freezes their property located on American territory.

In turn, the leader of Venezuela, Nicolas Maduro said that he considers such Washington activities as meanness. According to him, no one has the right to interfere in the affairs of an independent republic. Even the United States, which for some reason decided that they "have the right to govern Venezuela and communicate with Venezuelans."

According to NEWSru, the relations between Caracas and Washington, despite the substantial volumes of oil supplied to the USA, have been extremely unstable in recent years. Now, the late President Chavez has many times threatened to cut off oil supplies to the Americans and even promised to blow up the fields if Uncle Sam decides to be aggressive. He said that oil tankers, departing daily for the United States, could also leave "along a different route", making it clear that the world did not come together with a wedge of light.

In 2006, Mr .. Chavez really reduced the supply of oil to the United States, but already in 2008. took pity on the "poor Americans" and promised to restore export volumes, which he did the following year.

It should be noted that Venezuela is one of the leaders in terms of reserves of “black” gold. The contents of its storerooms are estimated at 296,5 billion barrels, which is about one fifth of all world oil. Nevertheless, the oil trade did not bring Venezuelans any prosperity, or, at least, economic stability.

The Venezuelan opposition sharply criticizes the government for miscalculations in the economy, focusing on the shortage of the most elementary goods, including food and toilet paper. But Maduro doesn’t see his government’s miscalculations, stating that the economy is being destroyed, first of all, by pogroms committed by the protesters. According to him, the authorities are ready for a constructive dialogue, but they are not going to abandon the revolutionary gains.
Ctrl Enter
Noticed oshЫbku Highlight text and press. Ctrl + Enter
We are
Venezuelan Parliament "removed" President Maduro from officeOn the border with Colombia, three Venezuelan soldiers were wounded. Nicolas Maduro introduced a state of emergency in border areas
Military Reviewin Yandex News
Military Reviewin Google News
28 comments
Information
Dear reader, to leave comments on the publication, you must sign in.